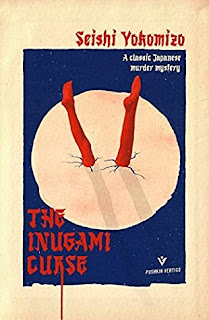 The Publisher Says: A fiendish classic murder mystery, from one of Japan’s greatest crime writers.

In 1940s Japan, the wealthy head of the Inugami Clan dies, and his family eagerly await the reading of the will. But no sooner are its strange details revealed than a series of bizarre, gruesome murders begins. Detective Kindaichi must unravel the clan's terrible secrets of forbidden liaisons, monstrous cruelty, and hidden identities to find the murderer, and lift the curse wreaking its bloody revenge on the Inugamis.

The Inugami Curse is a fiendish, intricately plotted classic mystery from a giant of Japanese crime writing, starring the legendary detective Kosuke Kindaichi.

My Review: Ex post facto narration isn't a trope for me to consume in rapid succession without psychic consequences, it seems.

When elderly Sahei Inugami finally has the grace to die already, he leaves behind the most viciously hateful will I can even conceive of. Much like the way Kindaichi gets into the family ugliness in Death on Gokumon Island via a request from someone who's dead now, the Inugami family lawyer calls on him to referee at the reading of this horrible will. Of course he dies on page three or thereabouts for his temerity.

What follows is a twisting, terribly sad recounting of the endless resonances of privilege in a family's life. Privilege won, in a society like Japan's pre-war was, counted for little...it was at best a grudging thing and this warped Inugami's experience of the prosperous life he wrested from an ill-willed social milieu. The man's surname means "dog god" and, since he was without a family, he had no way to know if it was something they'd have reason to take pride in or simply some long-vanished imaginative spark's cruel jest at him, an orphan.

The Inugamis of the next generations are warped by the curse of wealth, of deference given but grudged, and their lives made purposeless by their patriarch's iron control. His life ended far too late for the family not to be cruelly torqued into self-aggrandizing defensive arrogance. The children of the old man's mistresses, since their disadvantages were somehow socially sanctioned by being obvious, weren't entirely guilty...of more than usual awfulness, anyway.

What made this into a delightful set-up for a killing spree, also made it less than perfect: the presence of a gay couple whose dirty deeds made them unclean and unacceptable...period-appropriate and not exactly unknown as an attitude in present-day Japanese society. What bothered me the most, frankly, was the awful way a seriously disfigured war veteran was treated, described, dealt with; it all made his actions feel more like a man clawing back some dignity...too late and in the wrong way.

Translator Yumiko Yamazaki made some odd-sounding choices for my ears, e.g. choosing to switch between using the proper word kōtō and the oddly off-kilter transliteration "zither"...while the instruments are related they are not identical...despite making quite a palaver about defining a kōtō as a zither, she goes on to use both in the text. If there was some pattern to when and why the different words were used, I couldn't discern it. This played into a kind of story fatigue, an unforgiving hardening of my narrative-transporting arteries.

All in all, though, this survivor from Author Yokomizo's early publications presents a lovely and involving puzzle to solve, with several ancillary riddles on the edges of the main puzzle that were very interesting in themselves. I won't say it's perfect but I will say I've greatly enjoyed more time in Kindaichi-san's company. 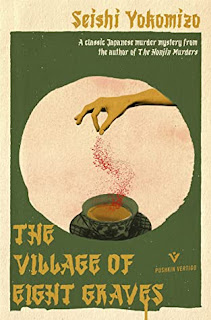 Nestled deep in the mist-shrouded mountains, The Village of Eight Graves takes its name from a bloody legend: in the Sixteenth Century eight samurais, who had taken refuge there along with a secret treasure, were murdered by the inhabitants, bringing a terrible curse down upon their village.

My Review: "The Village of Eight Graves" has a terrible history, and a terrible genesis in violence and unchecked greed. The common run of its people are afraid of life; they believe, and thus find evidence for, their manifold misfortunes being rooted in a curse that hangs over their heads from a long-ago unforgivable act. They are thus creating those conditions, interpreting the common misfortunes of life in that context. Superstition is a powerful drug. It allows us to Be Right, and there is absolutely nothing humans like better, need more, will work as hard to attain and maintain, than Being Right.

Bet you're nodding along....

I wanted to Be Right that Author Yokomizo couldn't tell a poorly paced story. I was...Not Right. The issue with this read is that our usual omniscient Watsonesque narrator is not here. Instead we have an irritatingly dimwitted PoV character called Tatsuya, whose chills are very much on a par with Miss Silver's cough in the irritating-authorial-choice derby. He spends our time sort of vaguely bumbling around while stuff happens and people he has reason to kill up and die, and then Kindaichi-san pops up (as we knew he must but, if I'm honest, I couldn't tell you why or how this hard-luck burg caught his attention...it was that little melded into the story). So the killings and deaths, somehow all connected to the village's ancestral curse, will all stop. Right? Right. But this time it's not Kindaichi-san doing detecting. It's the rush of events that Tatsuya has trouble keeping up with that reveals the malefactors. Kindaichi-san is here as window dressing, like a late Poirot novel! *grumble*

I sense a furtive glance up at the rating...yes, that's a "4" in front of the "*". What...the.... Well, it's like this: the translator, Mr. Karetnyk, proved more than capable of exceeding Ms. Yamazaki, the previous book's translator's, occasionally clunky choices. That was a big plus. Then there was the sheer gonzo pace of the murdering that's happening in Tatsuya's orbit. I can't quit a mystery mid-murder spree! I'm not made of stuff that stern. And the spree being so obviously calculated to implicate Tatsuya, who (poor wee lambkin) only now learned that the father who raised him was not only not his real father but knew who that person was...and Tatsuya was really thrown into emotional chaos by the entire unfolding plot to entrap and incriminate him through his parentage's revelation.

Then, while the bodies were piling up and the exsanguination was about ankle-deep, we go on an historical treasure hunt! The awful crime the villagers committed all those years ago was, you see, fruitless; they did not find the treasure they had filled the titular eight graves for. And now that Tetsuya's here, there's a reason to have a treasure hunt! Why? I don't know, whatever, treasure hunt! Does it make sense? Not to me. I am long past suchlike ponderin' when it comes to these stories. The secret to enjoying them is to flow with the river.

In the end, isn't that sort of a life lesson? Flow with the current, don't resist the pulls and changes, be there wholly and let the events unfold...I enjoyed this read's atypical ending a lot. I admit I don't want another Tetsuya narrator any time soon, but there was a reason he had to be the one to tell this story. It wouldn't have worked any other way, hence my seemingly over-generous rating. But do factor the change of focus via narrator into your reading plans.

Now, Pushkin Vertigo, it's on y'all not to dangle us over the pit for too much longer! More soon, please.