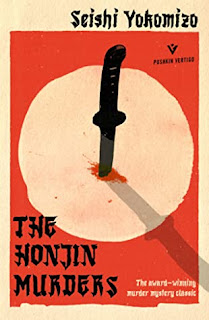 The Publisher Says: One of Japan's greatest classic murder mysteries, introducing their best loved detective, translated into English for the first time.

In the winter of 1937, the village of Okamura is abuzz with excitement over the forthcoming wedding of a son of the grand Ichiyanagi family. But amid the gossip over the approaching festivities, there is also a worrying rumour - it seems a sinister masked man has been asking questions around the village.

Then, on the night of the wedding, the Ichiyanagi household are woken by a terrible scream, followed by the sound of eerie music. Death has come to Okamura, leaving no trace but a bloody samurai sword, thrust into the pristine snow outside the house. Soon, amateur detective Kosuke Kindaichi is on the scene to investigate what will become a legendary murder case, but can this scruffy sleuth solve a seemingly impossible crime?

My Review: In a very Sherlock's-Watson fashion, the events of this premarital murder are narrated to us after the fact; we know, by this very technique, that the mystery is one that can be solved if we're game to follow the clues. Which clues? Well, the mystery-writer narrator and I are glad you asked:


When I first heard the story, I immediately racked my brain to think of any similar cases among all the novels I’ve read. The first that came to mind were Gaston Leroux’s The Mystery of the Yellow Room and Maurice Leblanc’s The Teeth of the Tiger; then there’s The Canary Murder Case and The Kennel Murder Case, both by S.S. Van Dine; and finally, Dickson Carr’s The Plague Court Murders. I even considered that variation on the locked room murder theme of Roger Scarlett’s Murder Among the Angells.

You really can't get a lot more fair-play than that, can you, giving the reader the crib sheet from which the author made choices and still, not to make it too easy by telling the reader *what* was cribbed from the Greats of the Golden Age. I found it endearing. I was very amused by the conceit, and by the writer/narrator following in the footsteps of the wildly disheveled amateur detective. Now...keep in mind this is a story written in the late 1940s and set in the 1930s. The idea of a Japanese man presenting himself as less than polished and perfect is damned near heretical. There was no beatnik, or proto-hippie, movement in Japan. It is a culture of Face, something I equate with my mother's endless mantra, "but what will People Think?" It's very, very important not to insult your neighbors, or your betters, by deciding to be different, to wear your Otherness on the outside...so featuring someone who's indifferent to Face in this mystery series is quite a powerful statement of value and intent on the author's part.

What's important for your pleasure in an amateur-sleuth read? An aura of verisimilitude? A relatable cast of characters? An evocation of a place and time? I'd venture to say that no one would behave the way the characters in this mystery do...but I could be wrong...at any rate, the point for me wasn't the verisimilitude (never is with amateur-sleuth mysteries, pace all you true-crime podcasters) but the delicious evocation of the time and the place:


A honjin was a kind of inn in feudal Japan where daimyo lords and other important officials would stay on their way to or from paying attendance on the Shogun in the capital, Edo—the old name for Tokyo. Ordinary members of the public were not permitted to stay at a honjin. A family who owned such a high-class lodging house were also members of the elite, and so it followed that this was a place where the rules of high society were closely adhered to.

The author, or more likely the editor and translator, gives me such a full and satisfying sense of the place with this simple paragraph. I wanted to feel transported and I did...as well as catered to, told a story to, and one that really did leave me guessing until the end. Very satisfying that Anglophone readers are getting this series (it has SEVENTY-SIX MORE VOLUMES!!) at long last...the author's only been dead since 1981. No rush, guys.

The things I wasn't quite so pleased to read were the class-conscious snobberies of the groom's family, presented without apparent or, to my mind, appropriate negativity cast on them. This being a thing that bothers me now, in the 21st century, I can't even try to guess if I'd even have noticed it had I read the book around the time the author died...almost forty years after it appeared. The snobbish tone is grating on old-man me, anyway. And the last chapter, number 18, is such a Golden-Agey thing...the way the guilty party is dealt with, the careful recounting of the places the clues were left...it was both what I wanted, and a hair too much to swallow in one draft.

If your mystery-story shelves are a touch too light, this is a good, solid, entertaining read...my crotchets aside. 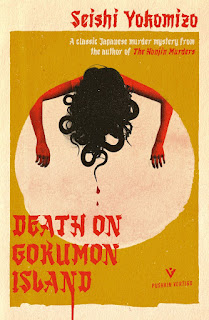 The Publisher Says: Kosuke Kindaichi arrives on the remote Gokumon Island bearing tragic news – the son of one of the island’s most important families has died, on a troop transport ship bringing him back home after the Second World War. But Kindaichi has not come merely as a messenger – with his last words, the dying man warned that his three step-sisters’ lives would now be in danger. The scruffy detective is determined to get to the bottom of this mysterious prophesy, and to protect the three women if he can.

As Kosuke Kindaichi attempts to unravel the island’s secrets, a series of gruesome murders begins. He investigates, but soon finds himself in mortal danger from both the unknown killer and the clannish locals, who resent this outsider meddling in their affairs.

Loosely inspired by Agatha Christie’s And Then There Were None, the fiendish Death on Gokumon Island is perhaps the most highly regarded of all the great Seishi Yokomizo’s classic Japanese mysteries.

My Review: This 1971 publication is the second case for Kosuke Kindaichi by internal chronology. I'm going by that order because it makes the most sense to do so for my little orderly brain.

But...here we go!...there's a lot wrong with this read. It's a cultural thing, permaybehaps, but any time women are victims of crime by virtue of their femaleness, I check out. I don't like or want that kind of imagery in my head. The way the author presents this heinous tontine by accident of birth as...a puzzle, a problem to solve. He goes about the solution methodically, and of course murder is wrong, but...there's a sort of "well, they were just women, after all" lackadaisicalness to the proceedings that truly got up my nose.

But I kept reading. Because there is a deeply unpleasant truth I must face in reviewing this book: I love a puzzle so much that, when I'm offered it wrapped in enough sweetly seductive mystery, I will just keep reading and ignore my squicked-out "but this is appalling!!" responses to see where we're going.

The merest tinge of remorse, it seems to me, was plastered like a too-small figleaf over the fact that the whole crime...the entire murdering spree, ending three innocent women's lives...could easily have been prevented by a simple consultation with a living man's moral compass long before the events became inevitable. As it was, that crucial step now, with their deaths accomplished, the detective suffers agonies of self-reproach...they're still dead, dude. The blame's not really his, in all honesty. It's properly placed on the planner of the crimes and the idiots who blindly follow orders.

It's a solidly atmospheric piece, which I know won't surprise you as it's the fruit of twenty-three years' practice of his craft. The translator's still giving us subtle hints about the cultural context and slyly explaining objects we in the West haven't a single clue about. The temple bell's cultural resonance...the island's peculiar patriarchal culture...the delicately handled, and odd, romantic strand that would've passed by me unremarked without the translator's quiet nudges...all beautifully handled.

Culturally intriguing, nicely constructed puzzle, all get big ol' tick-marks. The last-minute application of regret, even though I think the whole story's revoltingly misogynistic, does at least gesture at some sense of the trope's wrongness. You should make your readerly decisions based on your personal tolerance for unpleasant-to-you subject matter.

I've continued the series, so clearly it's not a deal-breaker for me. I really thought it would be.