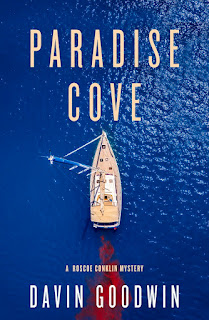 The Publisher Says: Every day is paradise on Bonaire—until something unexpected washes ashore

On the laid-back island of Bonaire, every day is paradise until a seaweed-entangled human leg washes ashore. Combing the beach, retired cop Roscoe Conklin examines the scene and quickly determines that the leg belongs to the nephew of a close friend.

The island police launch an investigation, but with little evidence and no suspects, their progress comes to a frustrating halt. Then, thanks to a unique barter with the lead detective, Conklin finds himself in possession of the case file. He can now aggressively probe for his own answers.

Sifting through the scant clues, eager to bring the killer to justice, Conklin struggles to maintain forward momentum. He has all the pieces. He can feel it. But he’d better get them snapped together soon.

Otherwise, the body count will continue to rise.

The novels in the Roscoe Conklin Mystery Series stand on their own and can be read in any order.

My Review: The awfulness of a friend's loss is hard to bear. Roscoe, our hilariously yclept detective, has that experience in spades when Erika, the lovely Bonaire native who runs...well, let's be honest, his entire life on Bonaire...loses her nephew whom she raised from childhood.

Roscoe is for sure gonna get deep into this case. He found the young man's leg on the beach. Yes, his leg...singular...and unattached.

What ensues is, as expected, Roscoe dealing with the Bonaire cops (in the form of his love interest Arabella) though, this time at least, he also has to deal with the Top Cop. As a client, as it happens...there's some whiff of shenanigans between the Inspector's wife and...well, that would be telling.

As much a tropical cozy as a procedural novel, the series is going to give you a lovely trip to Bonaire right as it's getting cold for #Noirvember here in the Global North. As the author lives in Wisconsin (!), one assumes he's there under eiderdowns and wearing Thinsulate gloves as he pecks these tales out with a pencil eraser-side-down in each claw-shaped frozen hand, tap-tap-tapping as he drifts away dreaming of being Roscoe.

I read these books back-to-back, and that was a mistake on my part. There are details in each, and the same sort of details, that go unnoticed and un-dealt-with in resolving the crime. There is not a huge sense of urgency in Roscoe's investigative technique...even when the dead person is someone close to his found-family circle. Everyone who needs to be found out is, and that is why I awarded the full fourth star to what otherwise would've been a three-and-a-half star read.

Space the reads out, don't binge, and make your experience mood-dictated, and you will have a lovely read indeed. 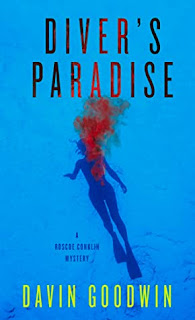 The Publisher Says: After 25 years on the job, Detective Roscoe Conklin trades his badge for a pair of shorts and sandals and moves to Bonaire, a small island nestled in the southern Caribbean. But the warm water, palm trees, and sunsets are derailed when his long-time police-buddy and friend back home, is murdered.

Conklin dusts off a few markers and calls his old department, trolling for information. It’s slow going. No surprise, there. After all, it’s an active investigation, and his compadres back home aren’t saying a damn thing.

He’s 2,000 miles away, living in paradise. Does he really think he can help? They suggest he go to the beach and catch some rays.

For Conklin, it’s not that simple. Outside looking in? Not him. Never has been. Never will be.

When a suspicious mishap lands his significant other, Arabella, in the hospital, the island police conduct, at best, a sluggish investigation, stonewalling progress. Conklin questions the evidence and challenges the department’s methods. Something isn’t right.

Arabella wasn’t the intended target.
He was.

My Review: Living in New York for as long as I have done, I found the detective's name...Roscoe Conklin (no "g")...very humorous. I also appreciated the setting, little-used Dutch possession Bonaire, particularly fun. Author Goodwin evokes island life, with its on-top-of-each-other intimacy and its high stress on reputations and their value, absolutely spot-on at every turn. (My own island residence isn't tropical, but it's very much that way exactly.)

I do actually, in this case, agree that these two books can be read in any order and you won't miss out on any connections or subtleties. I'm usually a very by-the-order kind of a reader.

The sleuth, Roscoe, is a mensch...salt of the earth...a solid, do-right kind of guy. For all that, someone's got a grudge against him. I suppose that's pretty inevitable for the cops of the world. What isn't inevitable, I hope, is the somewhat slapdash way Roscoe and his island love Arabella (a cop, not a retired one) treat clues and miss seeing some important ones (eg, friend Tiffany's boyfriend's a domestic abuser among other things). That's where that missing star went.

One thing I found particularly endearing was retired Chicago PD detective Roscoe explicitly says he wants to get to the truth of the matter, that being the only way he'll be safe and able to keep Arabella and his other island friends safe from tbe violence that's followed him there. That really made me like the author and his creation that little bit more.