NOW IS NOT THE TIME TO PANIC, follow-up to his fame-setting novel...worthy successor? 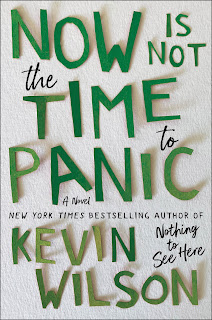 The Publisher Says: From the New York Times bestselling author of Nothing to See Here comes an exuberant, bighearted novel about two teenage misfits who spectacularly collide one fateful summer, and the art they make that changes their lives forever.

Sixteen-year-old Frankie Budge—aspiring writer, indifferent student, offbeat loner—is determined to make it through yet another sad summer in Coalfield, Tennessee, when she meets Zeke, a talented artist who has just moved into his grandmother’s unhappy house and who is as lonely and awkward as Frankie is. Romantic and creative sparks begin to fly, and when the two jointly make an unsigned poster, shot through with an enigmatic phrase, it becomes unforgettable to anyone who sees it. The edge is a shantytown filled with gold seekers. We are fugitives, and the law is skinny with hunger for us.

The posters begin appearing everywhere, and people wonder who is behind them. Satanists, kidnappers—the rumors won’t stop, and soon the mystery has dangerous repercussions that spread far beyond the town. The art that brought Frankie and Zeke together now threatens to tear them apart.

Twenty years later, Frances Eleanor Budge—famous author, mom to a wonderful daughter, wife to a loving husband—gets a call that threatens to upend everything: a journalist named Mazzy Brower is writing a story about the Coalfield Panic of 1996. Might Frances know something about that? And will what she knows destroy the life she’s so carefully built?

A bold coming-of-age story, written with Kevin Wilson’s trademark wit and blazing prose, Now Is Not The Time to Panic is a nuanced exploration of young love, identity, and the power of art. It’s also about the secrets that haunt us—and, ultimately, what the truth will set free.

My Review: Nothing to See Here was a solid 3.5-star read for me. It was entertaining and I got a few moments of real emotional involvement. I didn't think I'd go looking for more of Author Wilson's work but the Universe had other ideas...Ecco offered me the DRC and, being game as well as greedy, I hopped on it like a hen on a junebug.

Frankie Budge is a teenaged girl with a serious boredom problem. She's a Coalfield, Tennessee, girl who's smart enough to be a novelist in training and bored enough to do anything to stave off the screaming meemees. She's got triplet brothers whose lives will clearly end in tears, prison sentences, and severe emotional damage. Her father's left his family for another woman, and her mother...cruises...she lets Frankie be her own weird self because, well, triplet boys on the way to prison require more than a single working mother actually has to give. Yay for Frankie! Then she meets Zeke, a new kid with no friends.

Zeke's dad was a horndog, too. (Is this something Author Wilson knows about from personal experience, one must ask oneself.) Zeke apparently decompensated all over the guy in the middle of his office. Well, that's what his mom says...he can't remember any of it. Oh, and this is important: He's so freaked about the whole nightmare that he's decided to rename himself "Zeke" short for his middle name, Ezekiel. He and his mom are staying in Coalfield, where she was from. And that's how the match met the gas....

Y'all remember the 1980s Satanic Panic era? All that horror, all those lives ruined...well, in her gawky attempt to connect with this boy she likes, Frankie made the error to end all errors...she showed him a Xerox machine her brothers had stolen from the high school's shed. With toner and paper and everything...and she lets Zeke fix it, using the loveliest phrase for a paper jam I've ever heard: "like the machine had done origami"...so thus begins one of the major Satanic panics moved all the way up in time to 1996.

Their use for the photocopier is to make an art project (after Frankie uses it as an excuse to cop her first-ever kiss from a boy who's never kissed a girl either) of a poster—a drawing Zeke does after she writes “The edge is a shantytown filled with gold seekers. We are fugitives, and the law is skinny with hunger for us” on a piece of paper. Then the Xerox comes into play...she comments in her narrative about them being kids from Nowheresville and never having heard of Andy Warhol so they were inventing this new thing together...and, after making a bunch of them, Frankie puts them up all over Coalfield.

The inspiration of some older teens to play off this mysterious and compelling artwork, using it for their own ends, and the horrors that any powerful thing can call forth when it's anonymous and unclaimed, break the entire town. Frankie and Zeke are kids. They're way too scared to face up to the consequences (some truly terrifying) of their innocent actions. And that is where I realized I was a lot more involved with this story than I ever was with the first book of his I read. I circled back and read "On Writing Now Is Not The Time to Panic", Author Wilson's introductory story of how this book has been moving inside him for a long time. He spoke directly from his heart, revealed his genuine grief that finally summoned this book into the world after the decades of growing, and I was utterly changed. A story I'd thought was pretty good became a moving, honest act of love for a past and a life he was no longer living. And that made my pleasure multiply many-fold.

What it means to my old-man self to see someone as young as Author Wilson contend with the doomed promise of nostalgia, to confront the power of a past one can never reach but must always reach for...well, that spoke to me. That made me feel I was heard and understood by a complete stranger who couldn't pick me out in a line-up of Boomers. I am validated by this evidence of my sad, wistful knowledge of the ghost-hand of the past clutching with steel talons in someone young enough to be my child.

Then what the hell happened to that fifth star, it's fair to ask. Welllll...I'm really not sure it's fair to say, he said, glancing at the ever-present truncheons of the Spoiler Stasi. I'm not a big fan of the way the pressure to dredge up her past with Zeke, now going by his first name again, entered Frankie's life, and the things it led her to do were understandable but frankly disturbing to me. I felt she was violating boundaries for selfish reasons. It's not like she needed to do something she did the way she did it...the knowledge could've been gained less invasively...but here we are. I've only docked a quarter-star and I'm pretty sure the sales won't suffer because one no-name blogger was squicked out at some stuff that most of y'all (who never had your boundaries utterly disregarded by a woman) won't notice.

I'm still glad I read the book, you can see. I'm especially delighted by a piece of mother-daughter healing that spoke loudly to me. And you know, that is more than enough of a gift to take the slight sting of imperfection off my eyes.