THE INISHOWEN MYSTERIES, fifth of the five to date starring Ben O'Keeffe: THE BODY FALLS 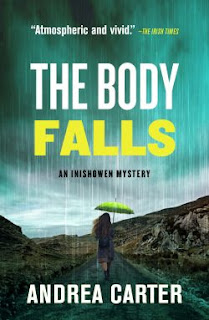 April in Florida and Benedicta (Ben) O’Keeffe is enjoying balmy temperatures during the last few days of a six month stint with a U.S. law firm. A week later, she returns to Glendara, Inishowen, where a charity cycle event is taking place. The town is abuzz with excitement, but it starts to rain, causing the cyclists to postpone the start of their event and stay overnight in the town. The rain doesn’t stop—it becomes relentless, torrential.

In the middle of the night, Police Sergeant Tom Molloy is called out to Mamore Gap, where a body, dislodged from a high bank by the heavy rain, has fallen onto a passing vehicle. It is identified as Bob Jameson, a well-known charities boss and the organizer of the cycling event. Stunned, the local doctor finds evidence of a recent snakebite. Terrible weather persists and soon bridges are down and roads are impassable. Glendara is completely cut off and since there are no native snakes in Ireland, could there be a killer trapped in the community? With no help from the outside world, it’s left to Molloy—with Ben’s assistance—to find out who is responsible for Bob Jameson’s bizarre death.

The novels in the Inishowen Mystery Series stand on their own and can be read in any order.

My Review: I don't entirely agree with the publisher that these books can be read in any order. I myownself suggest that you begin at #1 Death at Whitewater Church, and progress in an orderly fashion to this one, #5. But that is, of course, merely a recommendation.

I think, though, that without having seen Tom Molloy the Garda sergeant and Ben develop their feelings for and about each other, I'd've missed a major pleasure of the series mystery. Going back to earlier books, knowing what's happened in this book, would negatively impact my pleasure in the read. After Ben's return from Florida, which is totally unexplored in this book but where groundwork has been laid for future troubles to come Ben's way, she gets right back to trouble in her parents' home: The Usurper, as she mentally refers to him, has moved in and taken over the day-to-day running of their lives. They met in a group for grieving parents that all belong to. Ben, jet-lagged and knowing she's out of line to speak about the living arrangement of compos mentis adults, still feels...weird...about the situation.

However, Inishowen and six months' absence-worth of work to catch up on the disposition of ring a loud bell. To her own mild surprise, Ben is really looking forward to her homecoming...it's really home, she knows after leaving it. The locum, Marina, and her legal assistant are no doubt going to need to spill a lot of tea. Yay! Except for the filthy weather forecasted for the whole of Ireland that she must pilot her Mini (befouled by having been lent without her knowlege or consent to The Usurper) through, this is a great day.

Based on the factual Irish flooding and resultant disasters of 2017, there's really no let-up of either rain or trouble for Ben, Inishowen, Tom Molloy, ans a certain murdered party. (Whom I loathed from his first appearance. Though I found Author Carter's description of him perilously close to body-shaming.)

What mostly happens in this entry into the series is rain. Ungodly, Biblical-flood rain. Stuff falling over, people needing rescuing rain, and all of that's real. The author even points us, in her Acknowledgments, to national Irish papers doing the story in 2017. Everything that happens to the deadie happens because gawd let loose a strong stream of atmospheric water on Inishowen. How's that for a ready-made plot?!

What we get, in book five, is a reckoning of sorts between Ben and Garda Tom Molloy for their very tentative relationship's new course. I loved the way it led Tom, in extremis with the flooding, to resign himself to Ben's usual snooping...even saying at one point he needed the help given the tragic weather-disaster consequences.

As this book deals with someone being murdered whose murderer(s) I found delightful for their willingness to do it at all...cleaning the gene pool, I call it...that I was almost ready for an Orient Express solution. I didn't get one. Darn it. But instead there were more deths to Inishowen's people revealed. I am always glad that the author does this for us, makes the characters matter to us and still tells the tough stories that require resolution.

I'd say this entry was the best in the series. I feel more clear about Tom and Ben and their whatever. And the ending makes me think there's a lot of mileage in the couplehood they have set course for. In many ways they remind me of Mr. and Mrs. North, the Lockridges' sleuthing pair, in their earlier adventures. I hope that vibe continues.