THE INISHOWEN MYSTERIES, first of the five to date starring Ben O'Keeffe 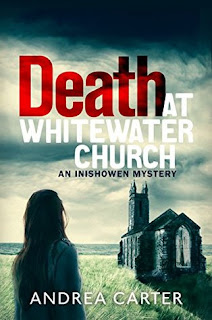 When a skeleton is discovered in the hidden crypt of a deconsecrated church, everyone is convinced the bones must be those of Conor Devitt, a local man who went missing on his wedding day six years previously. But the postmortem reveals otherwise.

Solicitor Benedicta “Ben” O’Keeffe is acting for the owners of the church, and although an unwelcome face from her past makes her reluctant to get involved, when Conor’s brother dies in strange circumstances shortly after coming to see her, she finds herself drawn in to the mystery. Whose is the skeleton in the crypt and how did it get there? Is Conor Devitt still alive, and if so, is there a link? What happened on the morning of his wedding to make him disappear?

Negotiating between the official investigation—headed up by the handsome but surly Sergeant Tom Molloy—and obstructive locals with secrets of their own, Ben unravels layers of personal and political history to get to the truth of what happened six years before.

TELEVISION ADAPTATION ON THE WAY!

Death at Whitewater Church is the first in a series of Ben O’Keeffe mysteries set on the Inishowen Peninsula in County Donegal, Ireland.

My Review: A terrific series-starting book, also an excellent publishing debut. Author Carter is a talented writer and was well-served in her editor. The flourishes rhetorical were agreeable:


Being an outsider in a town where most people have spent their whole lives is not the easiest way to live. Sometimes, in my darker moments, I felt as if my role here was limited to that of an observer and facilitator for other people. That my own life was a sort of half-life, as if I didn’t really count because no one knew my “people.” But I have my reasons for being here.

Pretty, also useful, also informative. A good writer takes that kind of direction from a good editor..."make the infodump into a confession!" resounds to a truly wickedly attuned writer like Author Carter is.

There are many twists and turns in Ben's trip through Whitewater's past. Her beautiful world of small-town solicitor worries, conveyances and wills and the like, is completely upended by the toothy rocks she's clung to while getting herself out of the North Atlantic after one of her truly daft February swims. Her local knowledge makes the stakes of learning her new community's older secrets all the more poignant and relevant.

I'll offer a mild criticism here: There is very little sense of the Love Interest's appeal. He's a blank canvas with some sketch-lines showing what he can possibly be. Even the moments that are the most intimate between Ben and Tom, before the fire and after the wine, aren't so much said as reported in the past tense.

It's a minor whinge. It niggled slightly and I noticed it, so I bring it up. But the *important* bit is the crimes that were and are committed in this small town. It's quite the surprise as to who's been bad and why. I found the resolution quite unimpeachably witnessed and for reasons I was completely sure were logical. The resolution fit the facts, and the way it's told to us is well within my suspension of disbelief.

Bravo, Author Carter, for making this series-starting novel a career-starting one as well.