NEVER SILENT: ACT UP and My Life in Activism, an essential memoir about AIDS 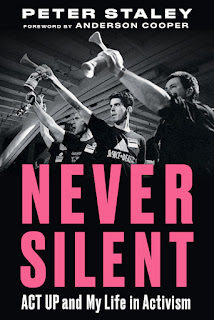 The Publisher Says: The previously untold stories of the life of the leading subject in David France’s How To Survive A Plague, Peter Staley, including his continuing activism

In 1987, somebody shoved a flyer into the hand of Peter Staley: massive AIDS demonstration, it announced. After four years on Wall Street as a closeted gay man, Staley was familiar with the homophobia common on trading floors. He also knew that he was not beyond the reach of HIV, having recently been diagnosed with AIDS-Related Complex.

A week after the protest, Staley found his way to a packed meeting of the AIDS Coalition To Unleash Power—ACT UP—in the West Village. It would prove to be the best decision he ever made. ACT UP would change the course of AIDS, pressuring the National Institutes of Health, the FDA, and three administrations to finally respond with research that ultimately saved millions of lives.

Staley, a shrewd strategist with nerves of steel, organized some of the group’s most spectacular actions, from shutting down trading on the floor of the New York Stock Exchange to putting a giant condom over the house of Senator Jesse Helms. Never Silent is the inside story of what brought Staley to ACT UP and the explosive and sometimes painful years to follow—years filled with triumph, humiliation, joy, loss, and persistence.

Never Silent is guaranteed to inspire the activist within all of us.

I RECEIVED MY DRC FROM THE PUBLISHER VIA EDELWEISS+. THANK YOU.

My Review: There is a certain kind of person who becomes a Wall Street "Master of the Universe," in their self-perpetuated self-applied description of their glorious, oversexed, hyper-entitled selves. The Eighties were the moments of national nightmare, both the ones we saw in Wall Street embodied by poor Michael Douglas delivering the "Greed is good" speech that haunts him to this day, and the ones we ignored, eg the S&L crisis whose little brother grew up to become the GFC of the Aughties. There was the moral crisis of the horror of the Reagan Administration's heinous, vile diplomatic disasters and raid on the Social Security Trust Fund. But these are large, generation-spanning structural and systemic disasters, unfolding on time scales not really important to ordinary people.

Then there was the AIDS crisis. Or, as it was at one point called, Gay-Related Immune Deficiency. This relates to the fact that the largest, most concentrated population suffering from the awful plague were urban gay men, whose "lifestyle" (how I loathe that term!) was recently, partially, and conditionally destigmatized. It burned through the New York gay-male community, it flared and killed in other gay-friendlier outposts across the country, and it was never a "gay disease" at all. Science, in its slow and ponderous way, had already established that the primary sufferers were Haitian and African heterosexuals by the end of the 1980s; this helped the disease get onto the Federal radar screens not at all.

Enter Peter Staley. Here's a Master of the Universe, a white male with all the privilege that conveyed then. And he's got AIDS-Related Complex. It was, in 1985, a kind of death sentence, a sort of scientific shrugging of the shoulders..."you ain't there yet, but it's where you're headed." And the poisonous priorities of the tax-cutting and faggot-hating "leaders" of the time meant little was being done, and that without much urgency, to discover and research the strange new disease. 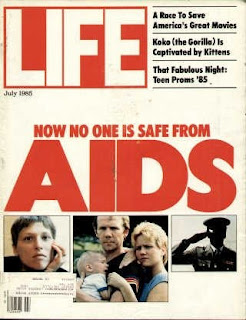 This hateful cover, dated July 1985, was the moment I myownself realized why there were so many people I knew dying but not being discussed..."oh, that's them, that's something they get...not me, not my family. Sad, of course, but..." It's that poisonous little "but..." that makes the real source of the problem obvious. "As long as it stays among them, well, who really cares?"

So here's where Peter Staley was in the Eighties. He had an enviable future, one most white men regarded as dream-worthy; he had a fatal disease; and he had a country whose leadership wasn't interested in making his disease's cure or management or even treatment a priority, because by having it, he was Othered.

And he got mad.

Don't piss off the Peter Staleys of this world. They know how the world works, what value symbolism has, whose words will matter to the average person and whose story will move mountains. And, when they get mad, you will hear their voice. Loud and clear. ACT UP...AIDS Coalition To Unleash Power...was born when Staley had had enough of being told he was a dying victim, either of malevolent chance or a vengeful god or even a US government conspiracy to kill Africans. This book, in all its glorious (yet strangely not angry) insiderness, fills in a huge, huge gap in the history of a movement that forced the entire Federal medical-research machinery to create and implement more humane disease-treatment and prevention protocols. Part of that work has, no doubt, saved many many lives in the current COVID pandemic. Drug treatments and vaccine development are where they are, in part, because of a ten-year fight by the brave young men and women of that powerful coterie of angry queers.

The personal stories Staley tells, the intimate truths he reveals about the personal triumphs and sacrifices and battles that attended every step of ACT UP's early years, make the massive organization that it is today feel so much more important to me. Its continued work is very, very different from its genesis because it can be...ACT UP changed because it succeeded, and because it could start fighting for different things in this new millennium. And Staley, while no choirboy in youth or age, has never stopped fighting his demons and the dragons outside himself they light up. His life has had loss and tragedy and deep, dark passages...and he tells us about them honestly. What he doesn't do is score points off people who were once allies and friends. I admire that.

I admire Staley's work even more. ACT UP's safe-sex messages reached me, a Manhattan-resident sexually active queer in the Eighties, and very likely saved my life. The love of my life was an AIDS suffering Bajan wrestler, Bland (which he refused to answer to, "my name is B.J.!" he insisted). He was already diagnosed when we met, so all our sex was the safer sort. I lost him thirty years ago, when he was thirty-four; I miss him still.

But I am HIV-negative, and alive to do so, in no small part because of Peter Staley and the work he and his cohorts did. Thank you for my life, Peter Staley, all the awful and painful and joyous and rewarding moments of it happened because you wouldn't sit down and shut up. So now's your chance to get the story behind why he made the choices he did, what happened and to whom and when. But don't expect the unpleasant grinding noise of axes being honed to killing sharpness. A long life, longer than you ever thought it would be, teaches one the value of letting go of grudges and the futility of settling scores. Despite his own more recent challenges, Staley remains fully aware of grateful for the gift of his life. It is this that I hope our COVID-ridden youngers will absorb and embody. All who read NEVER SILENT: ACT UP and My Life in Activism have a great head start.