GO BACK AT ONCE, a newly published novel not seen until after Robert Aickman's death 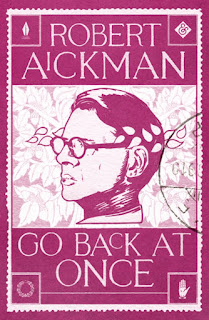 GO BACK AT ONCE
ROBERT AICKMAN
And Other Stories (non-affiliate Amazon link)
$17.95 trade paper, available 11 January 2022

The Publisher Says: A gloriously eccentric fantasy by the ‘most profound writer of what we call horror stories.’ Peter Straub

Completed by Robert Aickman in 1975, but unpublished in his lifetime and never before widely available, Go Back at Once is a delicious, delirious comic fantasy about the joys and terrors experienced by two young women seeking to escape the degradations of our technological and conformist age by fleeing to a chaotic, poet-ruled utopia.

Snobbish yet humane, reactionary yet camp, strait-laced yet queer, old-fashioned yet radical, Go Back at Once reveals Robert Aickman as a master not only of the ‘strange story’, but a satirist deserving of a place alongside the mischievous and venomous greats of the inter-war canon: Firbank, Compton-Burnett, Waugh, Powell.

My Review: I'm quite sure a lot of people will not like this book very much.

Sad, but inevitable; Aickman's work, when outside the unsettling norm of it, is quite an ask. You're going to meet Types, not characters, ones whose existence is actual, but susceptible to change in the century since the story...here based on the Free State of Fiume...is set. There are the expected players, if you've been reading British literature a long time, or are enamored of E.F. Benson or Ronald Firbank. There are the stock situations, eg the defended virtue of one of the leads. There is a tone of facetious, in fact malicious, judgment of those who express any notion of Idealism or Utopian thought.

Am I putting you off? I don't mean to; I want, though, there to be no misunderstanding about the book you're going to read: This is not ghost-story unease-inducing Aickman; this is sharply observant, unsparingly opinionated Aickman. It's not like we don't see this Aickman in his other works (or in his life, just read about how viciously he treated his co-founder of the Inland Waterways Association!); but this novel, centered on Cressida and Vivien as they leave school and move in with Vivienne's Aunt Agnes the free-spirited divorcée, shoves the mean-girl pedal to the floor.

The bitchiness of Aickman's observations is *epic* and unsparing and unerring. His trademark ambiguity is largely absent, in that he's unambiguously making the most savage sport of the people on these pages. It does become rather one-note as time passes in their company. If that note is to one's taste, that's all right. If it isn't, stop reading immediately because it won't change.

I was deeply enmeshed in this story despite its waspish tone. I am, perhaps, a touch on the waspish side, so I empathized with Aickman's desire to bat away the cigarette smoke of Fame and Adulation that surround those whose life-choices make no sense seen face-on. The Great Revolutionaries whose Ideas are Noble, but whose grasp of governance and finance is wanting, are a dime a dozen. D'Annunzio, whose life makes excellent reading, clearly fell into that category. (Though I think the judgment of modern people that he's a stalking goat for fascism is a great deal too harsh.) His treatment here, at the very end of the story, was hilarious if savage. No less savage was Aickman's invented future for Vivien and Cressida, whose identities I am not familiar enough with the literati of the period to tease out...though I hoped for Ivy Compton-Burnett and that Jourdain woman, they're entirely too old...a descent into what was a marriage in all but name, without a single sexual suggestion being made by the author.

Given his own repressed gayness, that can't come as a surprise. Merely being married to a woman (called "Ray" for heavens' sake!) for seventeen years didn't prevent him from being (discreetly!) known to have had liaisons with like-minded men. It was the way of that world, that time. It shows up in this story with lots of queer-coding, the way "foreign" people simply appear naked or are...touchy-feely, shall we say. Given that he died in 1981, one would've thought he'd've made a bit better peace with his gayness; this, however, did not occur. I suspect that he'd be a closet case even had he been born in 1964 not 1914. Some people just are.

One of the great pleasures of this kind of story is its structure. It reminded me a great deal of Candide, shorter journeys but just as much to-in and fro-ing where we are. There's also a lot of wetness, dunkings in the sea, raining, all the cold, clammy feels that brings up; lots of clothes-being-changed, shared, in general a sense of the instability of each character's presentation of self that Voltaire gloried in. Also Candidely is the sexual innocence of the young leads, their almost preternatural resistance to (and embattled saving of in one case) losing their innocent insensitivity to the Charybdis-level undercurrents flowing around them.

It won't be for everyone, but those it's for will batten upon its high-calorie low-nutrition richness.