#The1976Club: WOMAN ON THE EDGE OF TIME by Marge Piercy...well titled indeed ***SPOILERS*** 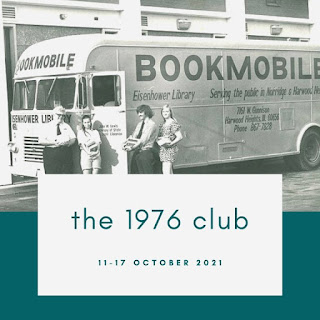 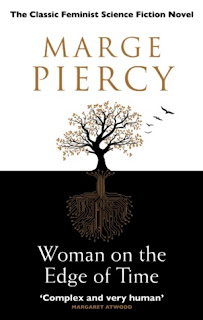 The Publisher Says: Hailed as a classic of speculative fiction, Marge Piercy’s landmark novel is a transformative vision of two futures—and what it takes to will one or the other into reality. Harrowing and prescient, Woman on the Edge of Time speaks to a new generation on whom these choices weigh more heavily than ever before.

Connie Ramos is a Mexican American woman living on the streets of New York. Once ambitious and proud, she has lost her child, her husband, her dignity—and now they want to take her sanity. After being unjustly committed to a mental institution, Connie is contacted by an envoy from the year 2137, who shows her a time of sexual and racial equality, environmental purity, and unprecedented self-actualization. But Connie also bears witness to another potential outcome: a society of grotesque exploitation in which the barrier between person and commodity has finally been eroded. One will become our world. And Connie herself may strike the decisive blow.

THIS READ WAS PART OF A LOOSE BLOGGER READ-A-THON CALLED THE 1976 CLUB. THERE ARE SPOILERS FOR THE ENDING BELOW.

My Review: I began this read eager to know why I've owned several editions of this book over the decades...one from my bookstore-having sister in the Seventies, one from my Manhattan years in the later Eighties, a British one from the Aughties...but never remember reading it! And now that I've read it again, I remember why I don't remember.

The ending just...isn't. The sense of resolution, of the fit between story and ending, is unsatisfying to me. And it took over sixty pages to get there.

You know from the publisher's synopsis that Connie Ramos, our third-person-limited PoV character, is a mental patient. It's the 1970s and psychopharmacology wasn't as advanced as it is now (I'd argue it's still roughly where surgery was in the pre-Lister 1840s). Much that is wrong with Connie is situational, and it's utterly unsurprising. She's "treated" by the standards of the day, which is to say confined and contained and circumscribed so she can't act out her acute agony. She's in need of psychotherapy, Cognitive Behavioral Therapy; she gets diagnosed as schizophrenic and the full machinery of experimental psychology gets to work on her.

Off we go! Luciente reaches her to show her a beautiful, granola-and-grown-out-hair Seventies egalitarian-hippie-commune future that I loved. "Gender" roles? Umm...what is per (their all-purpose pronoun, love that!) talking about, Luciente? Sex is biological...what is gender role? Part of the false dichotomies we've left behind.... What *wasn't* left behind was the of-the-time disrespect for sex work and workers, equating them to slaves. Reductive, shown to be inaccurate, but very feminist-70s. What isn't left behind is the disrespect of the future for the past. Luciente and all per people in Mattapoisett seem to know less than a US grade-school child about their own history. Connie says things that dumbfound these folk regularly...did all the books and digital records get destroyed? Then find a way to tell me so! (Goodness knows Author Piercy isn't afraid of infodumps.)

What I mostly didn't love was the way Connie, my PoV!, didn't look around and note things! But...well...this is a story about an abused and frankly impoverished and ethnically othered, therefore expendable, woman. All of those things are still stigmas, but they were a great deal moreso in the Seventies, and as Luciente's world (is Mattapoisett a Utopia, really, because war and societal conflict still exist there and then) bleeds into her own reality the Seventies Bellevue staff become less and less empathetic, more and more afraid of and for her, and act with more controlling behavior. It wasn't a joyride for Connie before but, as the life with Luciente recedes and Connie becomes mired in the mental hospital's horrors, the way she copes is...awful.

The aforementioned sixty-plus pages. I didn't like 'em. I did, however, recognize 'em. The months I spent in a locked ward in 2014 were a real eye-opener for me, and this might be why I didn't much enjoy the ending. My roommates were schizophrenic men. I had a really strong introduction to the hopelessness of schizophrenia and its utterly ineffective treatments. I think a big part of my getting my own brain back under my control was my sense of deep, abiding gratitude that I don't have *that* problem.

But does Connie? Is that really what's going on here? In her records, which we see, it says her intelligence is "Average" and is this detailed, consistent fantasy really something a person of average intelligence could come up with? It was here that I began to think the ending, besides just not being to my taste, actually missed a trick. What occurs isn't unrealistic. What it is, though, is without nuance. It asserts that Reality Is Reality. That's what we've just spent over three hundred pages interrogating! Taking that tack over quite an extended ending is...well...why not keep the interrogation, is Connie mad? is Connie telling us the truth? is Connie ever going "home"? going, that is, back to Mattapoisett. Instead the story ends with a THUD. And that wasn't at all on my Bingo card.


“Never in your life have you been helpless—under somebody’s heel. You never lived where your enemies held power over you, power to run your life or wipe it out. You can’t understand. That’s how come you stand there feeding me empty slogans!”

Luciente bowed her head. “You crit me justly, Connie. Forgive me. I’ll try to see your situation more clearly and make less loud noises in your ears.”
–and–
“Only in us do the dead live. Water flows downhill through us. The sun cools in our bones. We are joined with all living in one singing web of energy. In us live the dead who made us. In us live the children unborn. Breathing each other’s air, drinking each other’s water, eating each other’s flesh, we grow like a tree from the earth.”
–and–
Every day was a lesson in how starved the eyes could grow for hue, for reds and golds; how starved the ears could grow for conga drums, for the blare of traffic, for dogs barking, for the baseball games chattering from TVs, for voices talking flatly, conversationally, with rising excitement in Spanish, for children playing in the streets, the Puerto Rican children whose voices sounded faster, harder, than Chicano Spanish, as if there were more metal in their throats.

Never that I saw did it get better than that, and those are peaks that I've chosen. They're good, they're good, before someone says I'm saying otherwise. What they aren't is...tingly. That feeling you get when someone writes something that spears you with its sounds and feelings. I never got that in this read...and I'm pretty sure most others didn't either. What I saw praised, when I read the reviews others had written of the book after I finished my own read, was the ideas Author Piercy presented for the future, the cold analysis of the present...but not the prose. It's fine! It's not awkward, or lumpen; it's...fine.

But that's all it is. And that, I think, is my best summation of this read: It was fine, it had much to recommend it, but its heights weren't all that high and its lows weren't low.