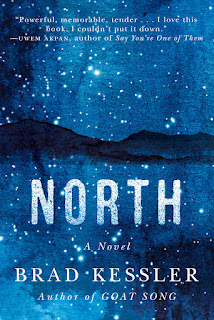 The Publisher Says: A powerfully moving novel about the intertwined lives of a Vermont monk, a Somali refugee, and an Afghan war veteran by the author of the acclaimed memoir Goat Song

As a late spring blizzard brews, Brother Christopher, a cloistered monk at Blue Mountain Monastery in Vermont, rushes to tend to his Ida Red and Northern Spy apple trees in advance of the unseasonal snowstorm. When the storm lands a young Somali refugee, Sahro Abdi Muse, at the monastery, Christopher is pulled back into the world as his life intersects with Sahro’s and that of an Afghan war veteran in surprising and revealing ways.

North traces the epic journey of Sahro from her home in Somalia to South America, along the migrant route through Central America and Mexico, to New York City, and finally, her dangerous attempt to continue north to safety in Canada. It also compellingly traces the inner journeys of Brother Christopher, questioning his future in a world where the monastery way of life is waning, and of veteran Teddy Fletcher, seeking a way to make peace with his past.

Written in Brad Kessler’s sharp, beautiful, and observant prose, and grounded in the author’s own corner of Vermont, where there is a Carthusian monastery, a vibrant community of Somali asylum seekers, and a hole left after a disproportionate number of Vermont soldiers were killed in Afghanistan, North gives voice to these invisible communities, delivering a story of human connection in a time of displacement.

My Review: I'm sure you're looking askance at three stars as opposed to the fours and fives all around it. It was my Goodreads friend Sarah-Hope's five-star warble of delight that brought into focus my dissatisfaction with this well-written read.

A book about the refugee experience is, of necessity, a book in motion, a book of change and danger. There is a lot of literary precedent for this structure, from the original picaresque Don Quixote to the eternal shame-making escape narrative Twelve Years a Slave, on through West with the Night's risky but voluntary peregrinations, In Patagonia's curiosity-propelled diggings. But the issue with North is that this structure crashes into the wildly different voyages of Father Christopher (also the name of the Catholic saint, patron of travelers) to contemplation's deepest coves and Sahro's fear- and death-driven flight.

While I'm in the greatest possible sympathy with this novel's aims, I am not convinced that Author Kessler handled this crash with a convincing direction for these two characters to meet as opposed to collide. The core relationship of these people wasn't made into a meeting of like minds, but a compassionate man offering charity to a desperate woman in terrifying danger that she need not have suffered in a properly ordered US.

So while I read the book without pain (Author Kessler does craft a handsome image...Father Christopher "...reached the rise, his shoulders relaxed. In the warmth of the morning he saw the slopes white with blossoms. The apples carpeted in blooms," after a tense and fearful bout of worry about a freeze), I was left feeling that the travels inwards and outwards weren't brought to the same place at the same pitch of emotion. It meant I felt that I was led, steered, pushed, nudged; I wanted to feel that, after all the movement, I was somewhere I hadn't been before...but there was only more travel ahead.

All US royalties are to be donated to a refugee-aiding charity. Please factor that into your Holiday purchasing plans. 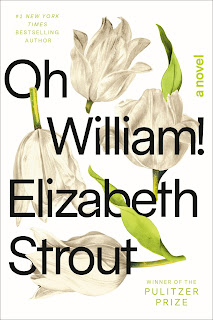 The Publisher Says: The Pulitzer Prize-winning, #1 New York Times bestselling author traces the enduring bond between a divorced couple in a poignant novel about love, loss, and the family secrets that can erupt and bewilder us at any point in life.

Through her careful words and reverberating silences (The New York Times), Elizabeth Strout has long captured readers' hearts with her spare, exquisite insights on family, relationships, and loss. And never has her perfect attunement to the human condition (Hilary Mantel) been so evident as in these pages, as Strout's iconic heroine Lucy Barton, of My Name Is Lucy Barton, recounts her complex, tender relationship with William, her first husband—and longtime, on-again-off-again friend and confidant. Recalling their college years, through the birth of their daughters, the painful dissolution of their marriage, and the lives they built with other people, Strout weaves a portrait, stunning in its subtlety, of a decades-long partnership.

A masterful exploration of human empathy, Oh William! captures the joy and pain of watching children grow up and start families of their own; of discovering family secrets, late in life, that rearrange everything we think we know about those closest to us; and the way people live and love, despite the variety of obstacles we face in doing so. And at the heart of this story is the unforgettable, indomitable voice of Lucy Barton, who once again offers a profound, lasting reflection on the very nature of existence. This is the way of life, Lucy says. The many things we do not know until it is too late.

My Review: I, alone among US adults 49-64, did not like Olive Kitteridge. I was lukewarm about My Name is Lucy Barton, but I didn't find it intolerably tedious. I truly can't think what made me ask Random House for a DRC of this book, but ask I did and they, unaccountably, said yes.

I'm really rather glad they did.

Lucy Barton is greatly more to my taste than Olive ever was. Amgash, her terrible isolated childhood, her absolutely clueless bumblings through parenthood, childhood's memories, learning to be Other with her mother, her *her*ness, rubbed me the right way as opposed to Olive's sandpaper-on-a-sore-tooth effect on me.

This story comes to me when I am Lucy's age, and I am also taking stock of my many pasts. William, father of Lucy's two daughters, wasn't the right husband for her nor was she the right wife for him. (Two more failed or failing marriages later, no one seems to be.) But they're friends. And as anyone who's ever been married or long-term-coupled will tell you, that's the thing that lasts. Their continued use of Button, her nickname from William, and Pillie, his nickname from her, is signaling this is a friendship for life. What her divorce stemmed from was, I suspect she is now coming to realize, a misunderstanding of what their true connection was.

But why, after decades apart, are we back in the position of hearing about William? Because the crisis in his life, learning an unwelcome truth about his own mother (whose relationship to Lucy was always cordial, if fraught on Lucy's side), and realizing that at seventy-one he is not going to Make It Right without trying (for once!), draws him right back to his heart-stealing first wife. She, whose second marriage was so very happy until he died on her, won't ever say No to Pillie. (Skip over the divorce bit.)

What transpires in this book was that rare and precious thing: Self discovery. Pillie and Button don't have all the time in the world, and they don't have a lot to lose as a result. Their relationship-long ability to connect in honesty (which is also why she left their marriage) is, at this late date, the most precious and unbelievably rare gift each has to give; the gift that each is now grateful to receive.

Lucy's old. She's had time to marinate in her failures. And she *still* obsesses about surfaces and appearances! Such a little thing, her snarky asides about what others are wearing and who can't make a decent speech; but so instantly relatable. Her life-long isolation and Otherness, relics of the childhood she survived, are never going to be gone, finished, dealt with. And that knowledge is how she can relate to William, how she can find her way to being his friend...he's got the issues she's got, just from other causes. Where Lucy was made to feel invisible, William was made to feel he could only be BIG. It comes to the same thing in the end: Are you going to leave a hole in the world when you leave it?


Grief is such a—oh, it is such a solitary thing; this is the terror of it, I think. It is like sliding down the outside of a really long glass building while nobody sees you.
–and–
I have always thought that if there was a big corkboard and on that board was a pin for every person who ever lived, there would be no pin for me.

I feel invisible, is what I mean. But I mean it in the deepest way. It is very hard to explain. And I cannot explain it except to say—oh, I don’t know what to say! Truly, it is as if I do not exist, I guess is the closest thing I can say. I mean I do not exist in the world. It could be as simple as the fact that we had no mirrors in our house when I was growing up except for a very small one high above the bathroom sink. I really do not know what I mean, except to say that on some very fundamental level, I feel invisible in the world.

These two people, these old friends, are groping towards the sense of life as it was lived being, when all is said and done, okay. Not great, not awful, okay. And the grief of that, the waste of "okay" to the world, is what they're learning to shrug off.

Eight decades on Earth and growing up never stops. If you're lucky. Pillie and Button are lucky. So are you and I, if we go with them.

Does my rating now seem mingy to you? I suspect it might. I'm not being unkind when I say there is a chemistry between writer and reader that I do not feel with Author Strout. Her phrase-making is often crazy-making for me. Her dithering women make me so so so so glad I'm gay. There are, of course, men who dither but thankfully I scare them off. I spent this whole book wanting to shout at Lucy, "GET TO THE POINT!!" when the point was that she doesn't. That made the read much more of a chore than a pleasure. But the story Lucy lived with her friend William, the story they're still living, was so very touching and moving and deeply agreeable to me that I powered through my desire to enact domestic violence upon her as she dithered and divagated and wittered *deep breath* Okay. Enough about that.

So there's the missing star-and-a-half. On the cutting-room floor, shall we say. But I want to be clear about this: Of the three books by Author Strout that I've read, this is head-and-shoulders above the rest and is the only one I will say, "read this, you will like it," about. It can be read as a stand-alone. It is better read after My Name is Lucy Barton, though. If you've already read Lucy Barton, you should trot right over to the bookery you prefer to patronize to get this before the COVID shortages make it impossible. Or, like me, get it on Kindle/e-reader.

But do get it.