THE INISHOWEN MYSTERIES, book three of the four to date starring Ben O'Keeffe 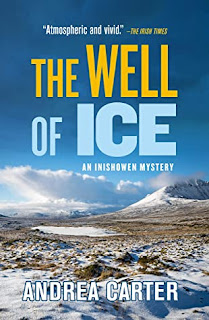 The Publisher Says: A cold—and terrifying—Christmas holiday on the Inishowen Peninsula

December in Glendara, Inishowen, and solicitor Benedicta 'Ben' O'Keeffe is working flat out before the holidays. But on a trip to Dublin to visit her parents, she runs into Luke Kirby—the man who killed her sister—freshly released from jail. On the surface he appears remorseful, conciliatory even, but his comment as she walks away makes her realise he is as foul as ever.

Back in Glendara, there is chaos. The Oak pub has burned down and Carole Kearney, the Oak's barmaid, has gone missing. And then, while walking the dog up Sliabh Sneacht, Ben and her partner, Sergeant Tom Molloy, make a gruesome discovery: a body lying face down in the snow.

Who is behind this vicious attack on Glendara and its residents? Ben tries to find answers, but is she the one in danger?

My Review: I don't know how the heck I didn't get book two of this series! I thought I had it and it wasn't until I was writing these reviews that I realized it wasn't here. Quite peeved with myself for being so careless...there are things that happened in book two, Treacherous Strand, that form the basis of the mystery in this entry. Author Carter quite competently fills me in, I'm not left wondering what the devil's up or why, but I'd've enjoyed getting here the old-fashioned way.

Don't make my mistake! But let it be said that I'm not in any way feeling deprived in my enjoyment of this book's plot, characters, or action.

The story isn't a straight-forward one: there are threads that tie things together that we aren't so much tipped to, but whose...wrongness...is a clear indicator that your inner sleuth should be engaged in this read at all times. The relationships among the good burghers of Glendara are not the uncomplicated "rural places are full of the salt of the earth charming lovely folk" types. There's adultery, but ya know what that's no biggie; there's bigamy, and that IS a biggie; then there's bastardy, and this ancient uncrime becomes the weight on the loom of Disaster's tapestry.

As is expected, too, the law-enforcement officer and the sleuth are challenged as a couple. Their own trust issues, springing from different places but with similar power, are foregrounded by every development in the several awful, violent crimes. It can't be helped. When each person is in a position of community trust, a couple is going to be hard put to fulfill their required roles at every turn—frequently starting from the internal question "what is my actual appropriate role right now?" No one can always get it right, and with all the best intentions, getting something catastrophically wrong is inevitable.

This does not in any way mean that I wasn't shouting "ARE YOU MENTAL DO NOT DO THAT" at my Kindle on multiple occasions. I honestly wanted to find the place on the map, book a flight, and go hand out some ass-chewings. Luckily for me I can tell you Author Carter really did make these places up.

While there's no story without some characters (plural) making bad decisions, the sheer obliviousness to the stakes of inaction that each and every one of them demonstrated at various times frightened me. Decisions to act in foolish ways are always easier to fix than failures to act in appropriate and timely ways. "Least said soonest mended" is NOT THE WAY FORWARD with criminals. Worrying about someone's feelings when there is a murderer in the vicinity is stupid. Blurt it out, fix it later! And even if you can't *at least they're alive*!

There are people no longer alive at the end of this book but, in the approved fashion for cozies, they are not people I myownself mind being dead. Not one little bit. Though, to be honest, the conclusion of this entry in the series does not include a vital piece of confirmation that suspicious ol' series-mystery consumer me seriously feels the lack of. The story is one of those that contains a credible motive for the resolution by discussion, but this feature could easily become a bug if it takes place every book.

What I'll delight in seeing more of is the way the community of Glendara continues to be willing and able to face down its dissension, hurts, and divisions. What I'll anticipate...not for much longer, Oceanview Publishing brings out Murder at Greysbridge on the second of November!...is learning how the huge sea-change, the La-Palma-landslide tsunami-level surprise plays out in this modern-world-problems involving series. I'm always happiest when reading books that don't cocoon the characters away from reality without reasonable care being taken to explain why they should be. I'm extra happy that Author Carter decided not to do that at all in this series.

Yes, I wish I'd read book two before this and am annoyed with myself that I carelessly failed to check the series list before starting this one. No, I'm not at all saddened by the way I was brought up to speed. And most of all, I'm so happy I got to read Andrea Carter's Inishowen series. Seek it out in paper, download a digital copy, read them in order!, but definitely read them soon.