AN EVENING WITH CLAIRE, the end of innocence from a Russian master & BEAUTY SALON, a pandemic tale from a Mexican auteur 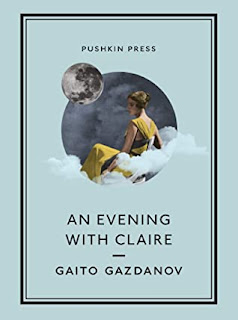 The Publisher Says: Two old friends meet nightly in Paris, trading conversational barbs and dancing around submerged feelings. Throughout the ten years of their separation, thoughts of Claire lingered persistently in Kolya’s mind. As the imagined romance finally becomes real, Kolya is thrown into recollections of formative moments from his youth in Russia, from his solitary early years through military school and service in the White Army in the Civil War, all leading to this union with                                                          Claire.

The first novel by the celebrated Russian master Gaito Gazdanov, An Evening with Claire is a lyrical, finely crafted portrait of a lost innocence and a vanished era.

My Review: While there is some lovely language in this short read, I did not end up thinking it was Deathless Prose.


These first, carefree years of life at the gymnasium were only rarely aggravated by those emotional crises from which I suffered so greatly but in which I nonetheless found an agonizing satisfaction. I lived happily—if one can live happily when a persistent shadow floats behind one’s shoulders. Death was never far away, and the abyss into which my imagination plunged me seemed to belong to it.

High school's like that. The highs are empyrean; the lows abyssal. Claire gets a whole lot fewer lines than an evening should hold. I was reminded of the Doobie Brothers' 1977 hit song, "What A Fool Believes", which covers the same territory in three minutes, forty-seven seconds.

Blasphemy to the literary, I know, but really I'll listen to the song again (and it was never one of my favorites) before I'll re-read this history lesson with straight-boy crush object posed in front of it. The entire Russian Civil War—one of history's major social paroxysms!—took place with a sleepwalking Kolya (Claire's fanboy) apparently numb to it. But of course he is...he is superior to the victims. (Where he got that idea, and what it's based on, must've been in a part of the read I didn't get in my DRC.) So, Claire of the title barely shows her face; the narrator's a numbed-out zombie or a sociopathic prick; and the story's too long for the récit it could've quite successfully been and too detached to work as a novel.

I'll see myself out. 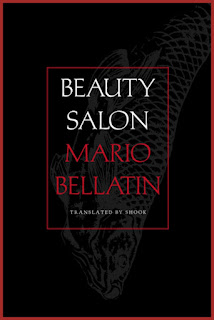 The Publisher Says: Mario Bellatin’s earth-shattering allegory of plague that brought him to his cult status as auteur of Latin America's most singular literary vision, in a brand-new translation by poet and translator Shook.

Mario Bellatin’s complex dreamscape, offered here in a brand-new translation, presents a timely allegorical portrait of the body and society in decay, victim to inscrutable pandemic.

In a large, unnamed city, a strange, highly infectious disease begins to spread, afflicting its victims with an excruciating descent toward death, particularly unsparing in its assault of those on society's margins. Spurned by their loved ones and denied treatment by hospitals, the sick are left to die on the streets until a beauty salon owner, whose previous caretaking experience extended only to the exotic fish tanks scattered among his workstations, opens his doors as a refuge. In the ramshackle Morgue, victim to persecution and violence, he accompanies his male guests as they suffer through the lifeless anticipation of certain death, eventually leaving the wistful narrator in complete, ill-fated isolation.

My Review: AIDS was my first plague. Unnameable for most of its first five years of blazing, horrible death, when a name was agreed upon it gave us something to fight. A name is more than a label. It is a badge, a target, a focus.

A badge is also, as the Holocaust taught us, a symbolic sentence of death.

That's what this short prose poem is here to remind us. It's eleven years old in English. It's a quietly bitter, carefully outraged indictment of the fear and loathing that queers with AIDS faced when there was no hope, no treatment, no medical possibility of a future.


It's no longer just my acquaintances with the sickness advancing through their bodies. The majority are now strangers who have no place to go. If it weren't for this place, their only alternative would be to perish in the street.
–and–
Now I have to run the Mortuary. To provide a bed and a bowl of soup to the victims whose bodies have already been ravaged by the disease. And I alone must do it.

Our narrator in this bitter récit is a nameless drag queen/retired beauty salonista whose own life is ending from the disease. She makes her world starkly plain in those sentences, showing that her life lived in service is ending in service. She's been a whore, she's been a beauty maven, and now she's tending to the last needs of those, like her, whose bodies aren't bodies any more:


I ask myself {as lovers come to the Mortuary's door seeking the dying} what moves those poor creatures to search for the sick. And why come in? Only to find themselves before someone who is no longer a person. Someone who, besides the space they take up, is nothing but a simple carrier for sickness.
–and–
{The Mortuary's inhabitants} become so mired in their lethargy that it's often no longer even possible for them to ask how they're doing. This is the ideal condition for doing my work. It's how I avoid getting involved with any one of them in particular, which makes my labors more expeditious.

Heartless? Or disheartened? One young lad gave our narrator a reason to be glad, for a moment, that he was alive. The disease ended the way the disease always does:


We took up collections to purchase his medicines, which were exceedingly expensive. It was all useless. The conclusion was simple. The sickness has no cure. All our efforts were no more than vain attempts to appease our consciences. ... Because of that experience, I made the decision that if there was no cure, the best outcome was a quick death, in the best possible conditions for the suffering.

That, my olds, is what we call "dissociation." And as a survival strategy, during a plague, there's not a better one to be found.

In the end, of course, there's no hope to be found in this bleak little bagatelle. There's nothing to mitigate the agony of knowing you're going to die, and it's going to suck, and then there's the Great Unknown. What is Death? Where do we go when we die?

Bellatín knows this. He's not giving anyone great death scenes here. He's not exploring the living's worries about Death. The closest we come is when our beautiful psychopomp has a huge bonfire of all his vanities, the dresses and the gewgaws and gimcracks of his life spent on the make for sex:


The more I sang, the more clearly I remembered new songs. It kept growing, the sensation that I was entering, bit by bit, the memories they evoked. Slowly, the fire burned out, until it was nothing but a slight wisp of smoke rising from the charred remains.

That, in the end, is pretty much all we have. A wisp of smoke, a singed satin hem, a moment of song snatched from a toxic conflagration of things not worth taking, of stuff we are ready to leave behind.