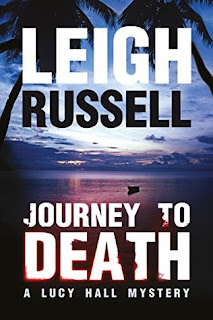 Rating: 4* of five for suiting my exact mood

The Publisher Says: Lucy Hall arrives in the Seychelles determined to leave her worries behind. The tropical paradise looks sun-soaked and picture-perfect—but as Lucy soon discovers, appearances can be very deceptive. A deadly secret lurks in the island’s history, buried deep but not forgotten. And it is about to come to light.

As black clouds begin to gather over what promised to be a relaxing family break, Lucy realises that her father stands in the eye of the coming storm. A shadow from his past is threatening to destroy all that he holds dear—including the lives of his loved ones.

A dark truth is about to explode into their lives, and that truth is going to hit them right between the eyes.

My Review: The wages of sin are paid by those born of it. This is the first of a new series starring the woman who will pay for hte sins of the past. It definitely kept me going as we start the book following George in the 1970s...a time of terrible political crises and much violence, as any of us who lived through it remember. Despite the terrible things happening, we're moving at a dream-like pace...it kept me from being fully immersed and presented a problem for me throughout the read.

Landing in the Seychelles for a family vacation, Lucy, George's twentysomething daughter, is ready for a complete change because she's just broken her engagement to a man whose idea of marriage isn't like hers. Because we do hear a LOT about that subject, I was about to skip the rest of the read. I kept going because the descriptions are fully and completely involving. I can't really extract one to show you, sorry...the problem with reading a DRC is that I can't copy-and-paste the way one can with normal Kindle books.

What I found ironic is that ever-so-betrayed Lucy's mother, put in jeopardy by her husband lying by omission, doesn't seem ready to snatch some passing policeman's gun and shoot him dead. I assure you that, were my Young Gentleman Caller to whisk me off to a beautiful foreign destination where he (searching for a lost love) got me kidnapped, you would need one sheet of blotting paper and a whisk broom to clean up what was left of him once I was free.

Anyway, I love reading about tropical places, I enjoyed Lucy's complete unwillingness to accept anything told her at face value no matter whose face was uttering it, and I wanted just this level of readerly demand. It's not perfect, it's not fast-paced, but it is lush and it gives you plenty to think about. Recommended! 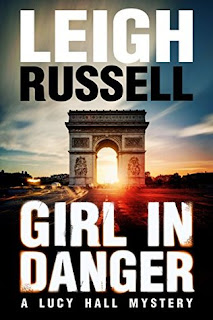 Rating: squeaks to 4* of five on its mood-suiting qualities

The Publisher Says: Chasing a story, reporter Lucy Hall plunges into a desperate fight to save her own life.

Lucy Hall’s first summer in Paris promises to be idyllic. She’s fallen in love with the city and enjoys her new job as an investigative reporter. When her friend Nina comes to stay, the girls look forward to a wonderful summer. But Paris is a city of contrasts and Lucy is about to experience its dangerous side.

When an anonymous source promises her a scoop, Lucy can’t resist the chance to make her name. The deeply unsettling meeting with her informant indicates that there may be more at stake than she’d suspected. Returning home with questions instead of answers, Lucy finds her apartment ransacked and Nina gone.

Lucy knows her friend is in danger, but the police are unwilling to help. When her informant is found dead, she realises she may be next. Lucy has something the killer wants and he’ll do anything to get it back…

My Review: Another case of feeling the scenery is a co-star in the read and might deserve a cut of the royalties. This time it's set in a place I've been! So I felt even more connected to the locales.

Another situation where I wonder how the bloody hell the woman got there...how is a twenty-four-year-old going to get an investigative journalist's position in a city she's not from, and barely speaks the language? And what journalist's boss would chastise her for pestering people for story ideas? That is the literal definition of her job.

Well, no matter, I wasn't asked to fact-check the MS so I let it go.

I totally bought that Lucy, knowing she's dealing with a dreadful underworld figure, would go to the police the second her visiting gal-pal vanishes and her apartment gets ransacked; I also totally bought that the police, knowing what they are bound to know of the criminal in question, basically shrugged and said "come back after forty-eight hours, kthxbye" because the young visitor will either arrive back confused from being lost or in Ziploc baggies piece by piece to scare Lucy away from being a journalist investigator. Either way the police don't really need to do much.

A little harder to buy is Lucy teaming up with Alain Michel (Alan Michael, the author didn't spend much time researching names), the proverbial P.I. with a Past; of course he Knows Stuff. It's a pearl-clutcher, this level of suspense. I will say that the author makes a serious effort to add some physical danger to this entry (largely theoretical last time), but most does this with details of the aftermath of violence and that doesn't have the same effect long-term.

But as I thought these dismissive thoughts I realized I was more than half-way through the read. What?! How did that happen? It happened because the prose is direct, well-formed, and the plot is familiar enough to make few demands and still involving enough to require that I finish the read. I enjoyed the sentimental journey to Paris, I liked the resolution of the plot, and found myself exactly the right read for a sloppy Sunday in this series.