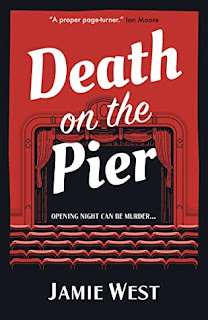 The Publisher Says: A murder mystery playwright turns real-life detective when, during one of his plays, an actress is shot and killed, while an unsuspecting audience watches on.

This theatrical murder mystery debut from Jamie West introduces Bertie Carroll, one of the most successful playwrights of the 1930s, and his old school friend Chief Detective Inspector Hugh Chapman. Together they team up to see if they can solve the mystery.

During the performance, the audience watches former Hollywood star, Celia Hamilton, as she is shot onstage, unaware that a real murder is taking place. It’s only when the curtain falls that the cast realise that something has gone horribly wrong.

Did someone swap the bullets in the prop gun for real ones, without anyone noticing? The actress who fired the gun doesn't seem to have any reason for wanting her dead, but is she hiding something?

Together, Bertie and Hugh must unravel the clues as they interview their suspects. As they do, their own friendship is rekindled. But is there something from their own past that needs to be uncovered? Why did Hugh want to meet up after all these years apart?

The story is set in and around The Palace Pier Theatre in Brighton, which no longer exists. This "lost" theatre has been lovingly recreated in the pages of this book.

My Review: I do love Golden Age mysteries. This one, a modern author's take on one of the best tropes for a murder mystery set in 1933 I know of, satisfied me in almost all ways.

The play as the scene of a crime trope is one I genuinely love. All Star Cast, a Golden-Age mystery I read via the Internet Archive, uses the same plot with a few embellishments that, frankly, this book didn't need and doesn't miss. I was enchanted by Bertie, our PoV character, being so absolutely down-to-Earth and commonsensical...I think playwrights absolutely must be both those things or they simply can not do the complex and complicated job of telling a story while moving people around the stage without feeling clanky-creaky-affected. There's so much of that delight present here, even in the descriptions of the action.

What I also loved was Hugh's evident pleasure in Bertie's company. He's a senior policeman...he knows what's at stake in dropping as many hairpins as he does for Bertie to notice! But he still does it, and he still affords Bertie's insights and insider knowledge of the play (which he wrote) and the players (with whom he's acquainted) and theater's many strange, invisible-to-outsiders customs and crotchets that explain how the murder was accomplished.

I believe with all my heart that we'll see these two together in some fashion at a later date. (Especially after Hugh engineers that swim. He clearly wanted a look!)

Why the murder was accomplished, now, that was pure Golden Age stuff. I thought there was nothing left to surprise me in Mysteryland...but there certainly was. The motive for the murder was straight out of Ngaio Marsh! I loved it, because I was reading (by that time) as though I was in 1933. It's just delightful to get that level of buy-in out of an old, tired grouch like me. And to have a real Golden Age detective who is One of Us, a Friend of Dorothy's, a queer gent...appropriately discreet but unmistakably gay, as minor character Teddy proves in his bluff, blokey-jokey way.

I so delighted in this experience. The author's evident love for theater, and his perfectly achieved evocation of a theater in Brighton long gone, came clearly through. It felt as though I was not only in that vanished theater, but in 1933, and among actors exactly like the ones in the story. Murder at the Matinee can't come early enough in 2023 for me! 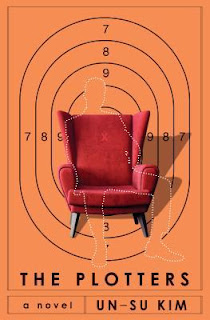 The Publisher Says: From the novelist dubbed "the Korean Henning Mankell" (The Guardian) comes a fantastical crime novel set in an alternate Seoul where assassination guilds compete for market dominance. Perfect for fans of Han Kang and Patrick deWitt.

Behind every assassination, there is an anonymous mastermind—a plotter—working in the shadows. Plotters quietly dictate the moves of the city's most dangerous criminals, but their existence is little more than legend. Just who are the plotters? And more important, what do they want?

Reseng is an assassin. Raised by a cantankerous killer named Old Raccoon in the crime headquarters "The Library," Reseng never questioned anything: where to go, who to kill, or why his home was filled with books that no one ever read. But one day, Reseng steps out of line on a job, toppling a set of carefully calibrated plans. And when he uncovers an extraordinary scheme set into motion by an eccentric trio of young women—a convenience store clerk, her wheelchair-bound sister, and a cross-eyed librarian—Reseng will have to decide if he will remain a pawn or finally take control of the plot.

Crackling with action and filled with unforgettable characters, The Plotters is a deeply entertaining thriller that soars with the soul, wit, and lyricism of real literary craft.

My Review: Oh, you're gonna love this:


As if it wasn’t ironic enough that the country’s top assassination provider was brazenly running his business in a building owned by an international insurance company; the same assassination provider was also simultaneously managing a bodyguard firm and a security firm. But just as a vaccine company facing bankruptcy will ultimately survive not by making the world's greatest vaccine but, rather, the world's worst virus, so, too, did bodyguard and security firms need the world's most evil terrorists in order to prosper, not the greatest security experts. That was capitalism, Hanja understood how the world could curl around and bite its own tail like the uroboros serpent. And he knew how to translate that into business and extract the maximum revenue. There was no better business model than owning both the virus and the vaccine. With one hand you parceled out fear and instability, and with the other you guaranteed safety and peace. A business like that would never go under.

“People think villains like me are going to hell. But that’s not true. Villains are already in hell. Living every moment in darkness without so much as a single ray of light in your heart, that’s hell. Shivering in terror, wondering when you’ll become a target when the assassins will appear. True hell is living in a constant state of fear without even knowing that you’re in hell.”

Witty, trenchant, and true. I would go so far as to say tendentious. The wonder of meeting Reseng is that his existence is so extreme, committing murders for a living, and yet so extremely simple. Show up at this place at that time and do your job...kill. Like working at a meat-packing plant or a fish cannery. People aren't in any significant way more important than cattle or catfish. In this hypercapitalist alt-Seoul, there's little enough difference paid to any even notional difference between them, when it comes to one of the Plotters making a meticulous and scrupulously untraceable plan to off the person they're being paid to murder.

Make no mistake, these are murders, and they are violent. Author Kim does not stint on the violence. What makes it different from all those ghastly Stieg Larsson clones is that it's not sexual violence. There's a modicum of sex, and even a brief interlude where Reseng, having gotten himself in the crosshairs of nasty competing assassins because his boss (and sole parent figure since he was orphaned) is getting shoved out of the business, explores domesticity. It's...bizarre. To him as well, which is why it doesn't last.

The whole novel unfolds at the strangest pace. If you've watched Squid Game or Parasite, you'll see it here: the off-kilter way pacing is handled for us calibrated to US norms. It serves the plot in all of these cases, and it makes this story's universe really *feel* genuine, lived-in, and solid. I think that's a major plus compared to most of the violent thrillers I've read.

What caused me to give the read four stars in place of another half was, in fact, the mismatch between the violence of Reseng's profession, his philosophical musings about it (I chose one illustrating what I'm talking about above), and the cool remove of his actions and reactions. These things don't work together as well as it seems to me others believe they do. It's like watching a Godard film with a boy you want to bonk and then not getting any after you've invested unrecoverable hours trying to figure out what the hell is going on.

For all that, this here's a terrific entertaining read. Alienation, outrage, warped filial devotion, blood and gore...all present and accounted for. It's a weird trip and I'm glad I took it.