DEAD LETTERS FROM PARADISE, lesbian sleuth in 1960s North Carolina & MY POLICEMAN, well-matched book and film...you can find both at Amazon! 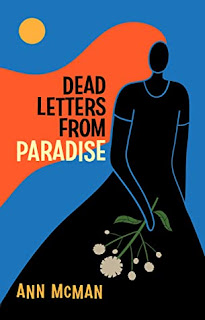 Gunsmoke is the most popular show on TV. Elvis Presley tops the Billboard charts. A charismatic young senator named John F. Kennedy is running for president. And, in North Carolina, four young Black men sit down at a Woolworth’s lunch counter and demand service. Enter Esther Jane (EJ) Cloud, a forty-something spinster who manages the Dead Letter Office at the Winston-Salem post office. EJ leads a quiet life in her Old Salem ancestral home and spends her free time volunteering in the town’s 18th-century hortus medicus.

One sunny Spring morning, EJ’s simple life is turned upside down when the town’s master gardener unceremoniously hands her a packet of handwritten letters that have all been addressed to a nonexistent person at the garden and expects EJ to “tend to them.” This simple act sets in motion a chain of events that will lead EJ on a life-altering quest to uncover the identity of the mysterious letter writer—and into a surprising head-on confrontation with the harsh realities of the racial injustice that is as deeply rooted in the life of her community as the ancient herbs cultivated in the Moravian garden.

When EJ is forced to read the letters to look for clues about the anonymous sender, what she discovers are lyrical tales of a forbidden passion that threaten to unravel the simple contours of her unexamined life. EJ’s official quest soon morphs into a journey of self-discovery as she becomes more deeply enmeshed in the fate of the mysterious letter writer, “Dorothea.” Her surprising accomplice in solving the mystery of the letters becomes one, Harrie Hart: a savvy, street smart ten-year-old, wielding an eye patch and a limitless supply of aphorisms. Together, Harrie and EJ make seminal pilgrimages to the tiny town of Paradise to try and uncover the identity of the mercurial sender and, ultimately, learn a better way to navigate the changing world around them.

My Review: I love Ann McMan's way of approaching a story. I understood I was reading about a closeted-even-from-herself lesbian instantly, from the moment EJ was introduced to me. I had a lesbian couple as "grandmothers" of a sort, best friends of my mother's for decades. They were Southern ladies, they were clearly a couple, and it...just didn't matter. They came to our house for Thanksgiving. They were constantly in our conversations about family, and had one name between them: "Sara-Lucy" since their names were Sara and Lucy; we just didn't need to say "and" because they were always a unit to all of us.

EJ and her friends were the kind of people, then, that I grew up knowing and loving. I strongly suspect Author McMan had someone(s) similar to my belovèd Sara-Lucy in her young queer life. She loves EJ as much as the child Harrie, EJ's shadow-cum-sidekick, does. Fay Marian is my nominee for that treasured role...the Moravian Herb Garden is such a perfectly chosen project for a group of lesbians to choose as a social hub.

What made the story itself, the dead letters that EJ receives to unite with their intended recipient or reunite with their sender (both unknown at the start), so beautifully chosen was the way Author McMan used these artifacts of thwarted love and strangled passion to bring EJ into a fuller understanding of Life as she *could* live it. She is living, no really she's just spending her one life unsatisfyingly, incompletely, almost entirely in the Dead Letter Office. As great a contrast as you can imagine is the child Harrie, so curious and open, so wise and still so innocent. She is a character I simply wanted to hug every time she came on the page.

I'd've rated the book a full five stars had I not felt that the period-appropriate race relations issues been less integral to the story than it was used as a grace note within the story. The issue isn't meant to be foregrounded...so the smart money says don't use it. In the present moment, the in-between handling of it comes across more as a detraction from than a point in favor of the read.

Still leads me straight (!) to Ann McMan's extensive backlist. I want more and I mean to have it. Thanks to my dear old reading buddy whose nudge pointed me in this direction. You're the best, Sister Woman. 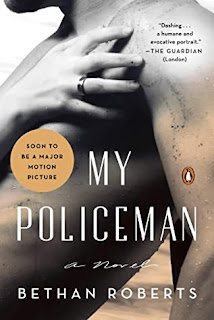 MY POLICEMAN
BETHAN ROBERTS
Penguin Books
$17.00 trade paper, if Mr. Styles's face from the film being on the book is an added bonus

It is in 1950's Brighton that Marion first catches sight of Tom. He teaches her to swim, gently guiding her through the water in the shadow of the city's famous pier and Marion is smitten—determined her love alone will be enough for them both. A few years later near the Brighton Museum, Patrick meets Tom. Patrick is besotted, and opens Tom's eyes to a glamorous, sophisticated new world of art, travel, and beauty. Tom is their policeman, and in this age it is safer for him to marry Marion and meet Patrick in secret. The two lovers must share him, until one of them breaks and three lives are destroyed.

In this evocative portrait of midcentury England, Bethan Roberts reimagines the real life relationship the novelist E. M. Forster had with a policeman, Bob Buckingham, and his wife. My Policeman is a deeply heartfelt story of love's passionate endurance, and the devastation wrought by a repressive society.

I CHECKED THIS BOOK OUT FROM THE LIBRARY. USE THEM OFTEN, THEY LIVE AND DIE ON OUR PATRONAGE.

My Review: This is a fictionalized version of the actual lived life of EM Forster, his policeman lover Robert Buckingham, and his lover's wife May.

I'm not going to tiptoe around the fact that this book was written more than a decade ago, which means the cultural landscape was quite different. This true story, only lightly fictionalized, has lost none of its power to move someone whose desire is to be let in on the hard, terrible work of loving someone more than they love you back, and the horrible, disfiguring things that jealousy can lead a person to do. I was appalled by Marion's actions in the book, which were NOT the actions of May Buckingham. I truly understand why Author Roberts chose to make this shift, though. The story's drama would've been more literary fiction-lite without it. As it is, this read is much more like sudsy, beautiful Ethan Frome in its impact.

I'm also not going to tiptoe around the fact that Mr. Styles, whose public presentation of self leads me to think this story's lineaments resonated on a deeply personal level with him, is still publicly straight and playing a role where the character's only assuming the mask of straightness where his heart and his cock are engaged elsewhere. Same old, same old...but let me say this now: He does a damned fine job of playing Tom, and he deserves credit for doing the job at all. We're sliding into another darker age for QUILTBAG people, it seems, after some modest gains were made. Mr. Styles's metrosexual-shading-into-heteroflexible persona is very risky, and he doesn't seem to shy away from it as hard as, say, Tom Hanks did after Philadelphia thirty years ago.

The book will be overshadowed by the film for many reasons. Not the least of them is that the film has pretty people who enacted simulated sex for our collective titillation. (Something Mr. Styles does with, erm, style and verve.) That is not, to be blunt, a terrible loss. This book is nicely written, tells an involving story, but it disappeared for most of a decade without leaving a ripple...for a reason.


Because when you're in love with someone for the first time, their name is enough. Just seeing my hand form Tom's name was enough. Almost.

In those days it was rare, wasn't it, Patrick, for Tom's voice to become what you might call serious; there was always a lot of up-and-down in it, a delicacy, almost a musicality (no doubt that's how you heard it), as thought you couldn't quite believe anything he said. Over the years, his voice lost some of its musicality, partly, I think, in reaction to what happened to you; but even now, occasionally, it's like there's a laugh behind his words, just waiting to sneak out.

I'd almost forgotten the joy of waking up and, before you've even opened your eyes, knowing by the shape of the mattress beneath you, by the warmth of the sheets, that he's still there.

Nice lines, precise observations, a deft touch in siting them within the storyverse. Nothing at all wrong, or even clumsy, in any of it; take my word for it, were Bethan Roberts to have dropped a clanger I'd've gleefully snipped it out and plopped it here, dripping venom and blood, for your (oh okay, my) delectation. I'm a grouchy old curmudgeon who wanted to dislike this book, and couldn't. I also wanted to dislike Mr. Styles playing Tom, and couldn't. I'm in the nasty, frustrating position of needing to praise, however grudgingly, the film and the book, the actor and the characters, that I wanted to bash.

The film, out on 4 November 2022 via Prime Video, is very much worth your time. The book is as well...buy it if the Kindle edition is on sale, or borrow it from your library if not. Reading the book first will not damage your appreciation for the film nor will seeing the film first make you wonder where the hell they dug that story out of the book from in the first place.

I just wanted excellent, not very good, so I'm out of sorts. That is, however, my issue and not the book or its film's problem.