THE GAYL JONES PAGE: THE BIRDCATCHER, nominated for a National Book Award & PALMARES, breaking a long silence in the author's art 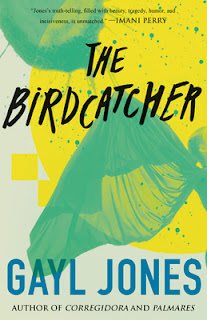 Gayl Jones, the novelist Toni Morrison discovered decades ago and Tayari Jones recently called her favorite writer, has been described as one of the great literary writers of the 20th century. Now, for the first time in over 20 years, Jones is publishing again. In the wake of her long-awaited fifth novel, Palmares, The Birdcatcher is another singular achievement, a return to the circles of her National Book Award finalist, The Healing.

Set primarily on the island of Ibiza, the story is narrated by the writer Amanda Wordlaw, whose closest friend, a gifted sculptor named Catherine Shuger, is repeatedly institutionalized for trying to kill a husband who never leaves her. The three form a quirky triangle on the white-washed island.

A study in Black women's creative expression, and the intensity of their relationships, this work from Jones shows off her range and insight into the vicissitudes of all human nature—rewarding longtime fans and bringing her talent to a new generation of readers.

My Review: It's very odd to me that Gayl Jones's voice was silent in American English for over a quarter century. This novel was first published in German during 1986—more than thirty-five years ago—and, until Beacon Press decided to take up the baton of being her publishing champions, simply didn't exist in her native country. It's hard not to see this as the fruits of racist-turbocharged sexism.

That said, this read (nominated for a National Book Award for Fiction, the prize to be awarded tomorrow) is a challenge for most readers. It's very complex and demands focus to derive a full picture of what happens in it; this makes a looser, less organized second half much more effort to decode.

Author Gayl has made a beautiful and strange artist's colony on the Spanish Mediterranean island of Ibiza where we meet Amanda Wordlaw (a name that might be familiar to some with previous exposure to Author Gayl), a Black American writer, as she resumes an intimate and borderline transgressive relationship with sculptor Catherine and her husband Ernest. The couple are deeply enmeshed in a psychically and physically violent relationship. Catherine, suffering from depression and other psychiatric ills, periodically makes strange attempts on Ernest's life. After Catherine is institutionalized, Amanda—in flight from a husband and child of her own for unexplained reasons—becomes ever closer to crossing the line into an inappropriate relationship with scientist and strangely calm Ernest. By the time Catherine comes home to continue work on her magnum opus, "The Birdcatcher" of the title...will she or won't she keep trying to kill Ernest? Are her materials-use restriction for Ernest's safety or are they self-imposed? And what the heck's this other artist, a white lady called "Gillette" like the razors, doing in this book? She's just irrelevant to my eyes...and why is Catherine allowed out of her institution? She's very clearly not in any way improved in her quotidian functioning....

This is why I am rating the book four, not five, stars. The second half shifts narrators from Amanda (whose husband has a *very* peculiar, and I suspect metaphorical, um...physiology) and her ponderings to being all over the place. It's not expected, and it means I now need to re-establish my investment in the tale being told as well as bring that level of investment to people I do not quite think are as interesting as Amanda, Catherine, and Ernest.

It was a very interesting note to end on...Catherine's past as a political activist and racism fighter (while never integrated into the story but rather reported to us at the end) was a major missed opportunity to explore but, more than anything else, explains the role of Catherine's obsessive de- and re-construction of the title sculpture. Such a graceful and beautiful metaphor deserved more from Author Gayl's talented pen.

If Palmares is a lyrical, evocative allohistorical exploration of the roots of identity, The Birdcatcher considers the eternal impossibility of knowing another soul, of being fully in touch with one's own soul, when in the toils of a toxic system of racism, misogyny, and the marginalization of creativity as anything except a commercial pursuit. If you're up for doing some very involved thinking about the story you're reading, this is a worthwhile story to invest in. I really ended up surprised at how much more I wanted from these characters, and then how glad I was not to be given it. 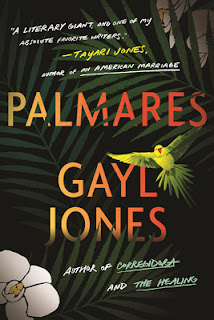 The Publisher Says: The epic rendering of a Black woman’s journey through slavery and liberation, set in 17th-century colonial Brazil; the return of a major voice in American literature.

First discovered and edited by Toni Morrison, Gayl Jones has been described as one of the great literary writers of the 20th century. Now, for the first time in over 20 years, Jones is ready to publish again. Palmares is the first of five new works by Gayl Jones to be published in the next two years, rewarding longtime fans and bringing her talent to a new generation of readers.

Intricate and compelling, Palmares recounts the journey of Almeyda, a Black slave girl who comes of age on Portuguese plantations and escapes to a fugitive slave settlement called Palmares. Following its destruction, Almeyda embarks on a journey across colonial Brazil to find her husband, lost in battle.

Her story brings to life a world impacted by greed, conquest, and colonial desire. She encounters a mad lexicographer, desperate to avoid military service; a village that praises a god living in a nearby cave; and a medicine woman who offers great magic, at a greater price.

Combining the author’s mastery of language and voice with her unique brand of mythology and magical realism, Jones reimagines the historical novel. The result is a sweeping saga spanning a quarter century, with vibrant settings and unforgettable characters, steeped in the rich oral tradition of its world. Of Gayl Jones, the New Yorker noted, “[Her] great achievement is to reckon with both history and interiority, and to collapse the boundary between them.” Like nothing else before it, Palmares embodies this gift.

My Review: Lyrical writing, exploring the roots of Identity, in an exoticized "Brazilian" setting that the author herself acknowledges is merely called Brazilian without deeply exploring Brazil or its extremely complex society.

There's been a lot of stick wielded at Author Gayl for this latter decision. She's not even trying to hide her lack of research. The Callaloo interview linked above is, simply, her statement of an author's privilege to invent and create as needed for her art: "...there aren't any facts or stories that one could say really happened."

The flipside of that choice is, of course, the responses of Brazilian people to what comes across to them as appropriation of their culture for the entertainment of others. The loudest complaints are Dandara do Palmares, famously African, replaced by a white character with her name. An unworthy part of me really enjoys seeing this kerfuffle center on a Black woman creator in this context. Another part of me is slightly impatient with Author Gayl for bringing such fully warranted criticism on a story that, at its heart, is about the roots of identity in memory, a notoriously unreliable source of any sort of truth or fact. Then the problems with Spanish words in a Brazilian context...well, it wasn't particularly well-handled to be honest.

So what the heck am I doing giving it four stars?

Because this is a work of fantastical fiction, made by a writer in her own mind, and that to me is a different thing than an historical study, biography, or even conventional historical novel. The author isn't attempting to tell the story of the actual Dandara, but has made the choice to invent an entirely other Brazil that doesn't really resemble the real one. It was a choice. She made it up...and that is an artist's privilege. I'm not hugely interested in ownership arguments, as I see them as the wrong angle to take on the "who tells the stories" argument we, as a culture, need to have. The answer in my view: Bring diverse voices to the table, listen to all the voices you can find, and quit worrying about whose voice is saying things "wrong." That's not relevant to fiction...the story one wants to tell is either true to the spirit of the inspiration or not, but that's not "wrong" it's just something people whose identity is involved should bring up as a data point. I want to read stories, always; I usually prefer them to be true to the source that inspired them, but even that is negotiable.

This has a very direct and personal relationship to me, an older gay man, because so many...so! many!...books about gay men in relationships are written by straight women. They get things wrong. It's really inevitable...a few have done so in ways I found quite startling. But I'm not going to say they were wrong for "appropriating" my identity as a gay man because they didn't. They chose to tell a story about people like me without doing research? Okay...but I'm going to tell on you. What difference it makes is to the people who listen to me, and take my opinions for what they are: More or less informed, experienced in some areas, and where possible backed up by facts. (Opinions are of necessity based on facts as one understands them, but not wholly defined by them.)

Anyway. My point, and I do have one, is that I took on board the upset responses of actual Brazilians to the way Author Gayl used their history as a launching pad for this lyrical and flowing exploration of American Black slave identities, and still found much to admire and enjoy in the way the author told her unique, wholly fictional story.

I can't give it a full five stars, as some have done, because I found the longueurs of stream-of-consciousness writing obtruded into my ability to connect the story just that fraction of time too much for the experience to be fully immersive. It's possible the novel is just that touch too long for its story....Almeyda does not start out fully formed yet we're asked to invest in her as though she has...but, at all events, Palmares made me stay up too late and care enough to do it.