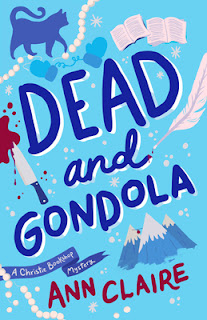 Rating: scraped up the goodwill of the season so 4* of five

The Publisher Says: When a mysterious bookshop visitor dies under murderous circumstances, the Christie sisters and their cat Agatha call on all they’ve learned about solving mysteries from their favorite novelist in this new series debut.

Ellie Christie is thrilled to begin a new chapter. She’s recently returned to her tiny Colorado hometown to run her family’s historic bookshop with her elder sister, Meg, and their friendly bookshop cat, Agatha. Perched in a Swiss-style hamlet accessible by ski gondola and a twisty mountain road, the Book Chalet is a famed bibliophile destination known for its maze of shelves and relaxing reading lounge with cozy fireside seats and panoramic views. At least, until trouble blows in with a wintery whiteout. A man is found dead on the gondola, and a rockslide throws the town into lockdown—no one in, no one out.

He was a mysterious stranger who visited the bookshop. At the time, his only blunders were disrupting a book club and leaving behind a first-edition Agatha Christie novel, written under a pseudonym. However, once revealed, the man’s identity shocks the town. Many residents knew of him. Quite a few had reason to want him dead. Others hide secrets. The police gather suspects, but when they narrow in on the sisters’ close friends, the Christies have to act.

Although the only Agatha in their family tree is their cat, Ellie and Meg know a lot about mysteries, and they’re not about to let the situation snowball out of control. The Christie sisters must summon their inner Miss Marples and trek through a blizzard of clues before the killer turns the page to their final chapter.

My Review: Meg and Ellie Christie, bookshop owners of Last Word, Colorado's, The Book Chalet, mystery solvers when a man who bumbles into their shop's séance turns up dead one gondola over from theirs on the funicular, and charming women trying to bring their worlds into agreement.

Meg, single mother of fourteen-year old Rosie, and her younger, newly unmoored sister Ellie, are invited by their retiring parents to come home and run the family's bookstore in their ski-resort hometown with her. It's a set-up that's an evergreen for a reason...it plays on the familiarity of a native place while still allowing the returned native a chance to "catch up on" the time they've been away. It also establishes the family's relations to each other, in that one would get a whole different idea of Meg had she seemed grudging or reluctant to accept younger, single Ellie to join the business. I think one is immersed in the sense of a happy family from the second their Gram comes onto the pages, knowing she has been their rock throughout life. That, too, sets a facet of the family's character as a system in addition to demonstrating the cozy-series bona fides Ann Claire is seeking to establish.

I'm a sucker for bookstores in fiction going back to the first mystery series set in one that I fell in love with: Claire Molloy's Book Depot in the Farberville, Arkansas, set humorous cozies by the late, lamented Joan Hess. This debut is joining a long and belovèd lineage. I am delighted to report that this is a happy meeting of fantasy (bookstores require *huge* amounts of labor and run on the slimmest of margins) and storytelling. The ski resort setting is nice, in that I'd always rather read about cold, snowy places than hot ones, but not outstandingly detailed. I suppose this is all a matter of what one wishes to have in a series-starting story...the sense of possibility is there in this story so there's plenty of room for additions and expansions.

Rosie annoyed me. She's fourteen, of course she was going to, but really this is a trope I can do without, the adolescent eyeroller. Anyway. At least she wasn't a bookstore cat, those horrible, misery-making creatures...like Agatha C. (for "cat" ickshudder) Christie. I mean, *obligatory warning of sexist stereotyping to come* I know I'm not a woman so I don't really get the appeal of cats *end sexist stereotyping*, but can there be a bookstore without a cat in mysteryworld now? Please?

WHat's right about the read far outweighs my grumbles about details. None of them ruined my reading experience. I am sure Author Ann Claire (also known as Ann Myers and/or Nora Page) knows her craft from practicing it for quite some time across several series. I expect a high level of polish from such an author and was not let down in this read. Recommending a book such as this is always touchy...what causes a series to soar is so often alchemical symmetry between author and reader...but consider this: I read this entire book that features a cat as a character...my most deeply beloathèd animals!...and am here writing a positive review.

This is an author with chops. Trust her, follow her through this story, and I predict a lot of y'all will have a new series to enjoy. 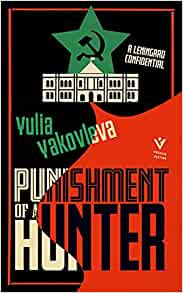 The Publisher Says: The debut of the ultimate noir detective series: set in Stalinist Russia, riddled with corruption, informers, and purges that takes paranoia to the next level

MURDER
1930s Leningrad. Stalin is tightening his grip on the Soviet Union, and a mood of fear cloaks the city. Detective Vasily Zaitsev is tasked with investigating a series of bizarre and seemingly motiveless homicides.

MAYHEM
As the curious deaths continue, precious Old Master paintings start to disappear from the Hermitage collection. Could the crimes be connected?

MISTRUST
When Zaitsev sets about his investigations, he meets with obstruction at every turn. Soon even he comes under suspicion from the Soviet secret police.

The resolute detective must battle an increasingly dangerous political situation in his dogged quest to find the murderer―and stay alive.

My Review: This is a newly translated series-starting thriller. I'm eager for the second one to appear, so go buy this one now.

Seriously. The only way the publisher knows there's a market is if there are sales, so go on now.

What do you mean, "but why should I?" Oh very well. Look at this image, of the same title as the book: 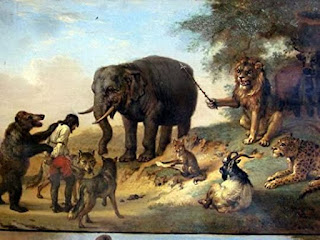 Doesn't that simply say it all in artistic form? And the painting's in the Hermitage collection in Russia, too.

The 1930s were a scary, scary time to be a Soviet citizen. The surveillance state's apparatus was risibly primitive by comparison to today's hypercapitalist surveillance model, but it was effective. Like those old Hitchcock movies where men in slouch-brimmed hats smoked on streetcorners by your apartment, the pervasive atmosphere was paranoid and terrified. (Our {great-}grandparents had more sense than we complacent and indifferent acquiescers do.) To be a policeman in a state-sponsored terrorist society, to be studied minutely as one tries to achieve the ever-elusive goal of bringing justice to transgressors while avoiding the political pitfalls of society's mad/badness, adds a layer of suspense to thrillers.

Author Yakovleva does a truly creditable and credible job with Zaitsev, her sleuth. He doesn't miraculously float above The System somehow, nor does he set out to provoke The System's minions to make his points. He falls victim to the excesses of the times (CW for torture!) and he still stubbornly insists on doing the right thing by the victims of personal violence. It is very much in the vein of the "lone truth-seeker" genre of thriller. I think those stories can go wrong quickly, turning into libertarian screeds against any and all forms of government by equating them with oppression. This book dodges that bullet by being about, explicitly taking as its subject, that nightmarish oppressive government and its warped and broken victim/citizens. I wish more libertarians would read this kind of historical take because it puts into a cold, unfriendly light the mild checks on their worst selves that so chafe them.

Author Yakovleva is ably assisted in telling her story by Translator Ruth Ahmedzai Kemp. There are bursts of informative explanatory things in the text that I'm sure are her work...no one in modern Russia likely needs as much explanation of the role of the OGPU, for example (the domestic secret police, like the FBI or latter-Soviet-days KGB). That this information, among so much other information needed by Anglophone readers not Russophone ones, was woven into the text pretty darn seamlessly is a testament to Translator Kemp's grasp of and skill at presenting the reader the best version of the original text.

What makes it a perfect book to get your thriller reader giftee, or your thriller loving self, is that very thing: It's the best version of what was, if my Spidey-senses do not deceive me, a top-quality read from the get-go. Translations are often serviceable, telling the story as it was told in the original and not grasping, or conveying at any rate, whatever special sparkle the original had. It sounds weird to tell you that the cold, grim, gray landscape of Stalinist-Purge era Leningrad, peopled with terrorized victims and subjected to psychic violence, physical violence, and sensory deprivation on an industrial scale, has a sparkle to it. But it does.

Not a joyous resolution to the weird, theatrically staged and colorfully over-the-top crimes committed here...but a resolution I believed and I supported with my whole readerly heart. More of Zaitsev, please, Pushkin Vertigo. We need this kind of "history as sly social commentary" Russian fiction; we in the Anglophone West need the warning klaxon of what *real* oppression feels like, why it does to its victims, so we will stop our loud, pointless whinging.