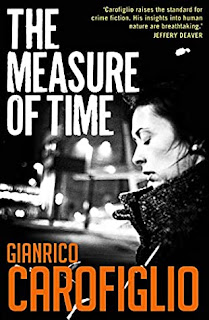 The Publisher Says: The latest in the Guido Guerrieri series.

The setting is Bari in Southern Italy. Against his own instincts, defence attorney Guerrieri takes on an appeal against what looks like an unassailable murder conviction. The alleged perpetrator is the son of a former lover. A taught legal thriller and a meditation about the ravages of time.

One spring afternoon, defence attorney Guerrieri is confronted with an unexpected spectre from his past. In her youth, Lorenza had been a beautiful and unpredictable girl with dazzling charm. A changed woman faces him in his office that day. The ensuing years have ravaged her appearance and embittered her mind. As if that weren’t enough, her son Jacopo, a small-time delinquent, stands convicted of the first-degree murder of a local drug dealer. Her trial lawyer has died, so, for the appeal, she turns to Guerrieri as her last hope.

Guido is not convinced of the innocence of Lorenza’s son, nor does he have fond memories of the way their relationship ended two decades earlier. Nevertheless, he accepts the case; perhaps to pay a melancholy homage to the ghosts of his youth. His old friend Carmelo Tancredi, a retired police inspector, and his girlfriend, the charming investigator Annapaola Doria are once again by his side.

A masterful, compassionate novel, striking a balance between a straightforward trial story—some say the purest distillation of human experience—and the sad notes of time as it passes and exhausts itself.

My Review: Last time we met Avv. Guerrieri, he was feeling his age and feeling Time's Arrow poking him between the shoulders. I think he, and Author Carofiglio, are winding down their association. That feeling is stronger having read this latest entry in the series.

As Guido reacquaints himself with the lyrics of "What a Fool Believes," he works his dogged best to ignore the ancient and life-changing on his side relationship he had with Lorenza while her son languishes in prison for a crime he swears he's innocent of. The trouble is he simply can't. I don't guess we ever can. Meeting someone special from long ago is inevitable, I suppose, but more often than not unsatisfying. It's Lorenza's son's bad luck to have a mother his new lawyer can't get over.

Yet get over her Guido does...it takes a lot out of an old-flamehood to go painstakingly over the present's ugly realities with her. And, lest you forget, Guido's feeling his age in many ways these days. When one does something, even does it well, for a long time there creeps in a staleness and a tedium to make the world just a bit darker all around. That's where Avv. Guerrieri is in his life, doing his dead-level best for Lorenza's sake and to satisfy his bone-deep conviction that everyone deserves the best representation possible. He knows young Iacopo did not get that. But...is he, after all, guilty? Could this just be time-serving, motion-going-through? It's an unnerving truth that Guido doesn't know. He just does not know.

Scary place for a defense lawyer to be.

At any rate, the story is told in vintage Carofiglio style...we are there, we are never kept in the dark about the developments that Guido himself isn't kept in the dark about. I am on record as liking this style of telling a procedural story, especially one that's set in a legal system very unlike the one I'm accustomed to by six decades' reading of mysteries. It's also interesting to me that Author Carofiglio (a lawyer by trade before becoming a writer and a Senator) goes through Avv. Guerrieri's speeches to the judges and, in real-time, gives us his second-guessing internal monologue. That is very much to my taste, and it's still in evidence (!) in this entry in the series.

Where I wasn't quite so enthused, though, was in the number of Lorenza flashbacks Guido indulges in. This woman was extremely formative for his life and his outlook on gender relations! I get it, the need to process that old baggage is deep. I felt, though, that it got in the way of my seeing Lorenza the mother of the accused, as well as Iacopo the accused himself. It was, I suppose the best way to say it is, both overdone and underpresented.

It wasn't a fatal blow to my pleasure in the read since I gave the book four and a quarter stars. I think it was effective at one of its jobs, to wit: Demonstrating Avv. Guido Guerrieri's increasing longing to retire, to find a life outside his living. He's worn a groove in his spirit doing this important, and satisfying, job. This case...its links to a past he doesn't want to dredge up but won't fail to look in the eyes...its unsurprising results...its ending that we saw coming because of course...it's all just another turn of the wheel.

Stopping and alighting are, I suspect, the next things Avv. Guido Guerrieri will do. If so, I'll miss him. But I completely understand. 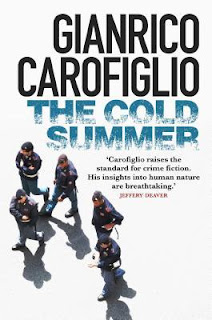 The Publisher Says: The summer of 1992 had been exceptionally cold in southern Italy. But that’s not the reason why it is still remembered.

On May 23, 1992, a roadside explosion killed the Palermo judge Giovanni Falcone, his wife and three police officers. A few weeks later judge Paolo Borsellino and five police officers were killed in the center of Palermo. These anti-mafia judges became heroes but the violence spread to the region of Bari in Puglia, where we meet a new, memorable character, Maresciallo Pietro Fenoglio, an officer of the Italian Carabinieri. Fenoglio, recently abandoned by his wife, must simultaneously deal with his personal crisis and the new gang wars raging around Bari.

The police are stymied until a gang member, accused of killing a child, decides to collaborate, revealing the inner workings and the rules governing organised crime in the area. The story is narrated through the actual testimony of the informant, a trope reminiscent of verbatim theatre which Carofiglio, an ex-anti-mafia judge himself, uses to great effect.

The gangs are stopped but the mystery of the boy’s murder must still be solved, leading Fenoglio into a world of deep moral ambiguity, where the prosecutors are hard to distinguish from the prosecuted.

My Review: The cold summer indeed...very cold for those whose Earthly remains could, thanks to massive bombs killing them, be measured in teaspoons. Author Carofiglio was, during that memorable summer that turned the tide against the Sicilian Mafia and its other regional affiliates, a working prosecutor fairly early in his career. His story, as told here, is one that truly feels like it happened exactly this way despite its being fiction. When one knows the author's history, it does inform the experience of reading the author's words. In this case, I've been on Team Carofiglio since I first discovered the Guerrieri series a decade-plus ago.

In this book's case, it's the second Fenoglio novel written but the first translated into English. In Italian, the first one's called Una mutevole verità or literally "A Changing Truth" but I'd probably call it "Slippery Facts" or something similarly indicative of dishonesty. It's a much shorter work and isn't about Fenoglio so much as about how a man in his position...a "foreigner" to the Barese he works with since he's from Piedmont-Savoy (basically France to the Southern Italians)...can see but not get what he's seeing. This outing, being about a gigantic trauma that shook Italy to its core, makes more sense to have come out first in the series.

The set-up for the story is Author Carofiglio's usual quiet, meandering walk through the detective's days as the crime is committed and he begins to look into the causes and results of it. About midway through, a huge shift happens. In this story, the shift is a break in the wall of silence around organized crime's activities. All it takes is one lousy creep afraid of getting punished for a particularly unpopular crime (child harm is a death sentence in most prisons around the world) to blow open the stalled cases he knows about.

Structurally, the way Author Carofiglio manages the case-breaking event in this book is to spend several chapters on the scumbag's interrogation. This isn't flash-fast, as I imagine you're thinking it might be. Italian crime fighting moves at a different pace and to a different rhythm than the US version. The cast of characters is different because the legal system is organized very differenly, with responsibilities split in different directions. That, for my dollar, is one of the selling points of these books. I am absolutely enrapt in the cast of legal characters and eager to hear more about what they do and why they do it...I suspect Translator Curtis, having worked on a half-dozen or more Carofiglio novels in several series (as well as no series at all), is responsible for the ways some characters discourse explanatorily...as it sharpens the pleasure of being swept up in a very different world. That being something I look for, and forward to, in my reads, I'm happy as Larry while it's going on. YMMV, of course, so don't forget to account for your own tolerance for exposition when choosing these reads.

The reason I'm fond of Fenoglio, and I suspect I'd be fond of Author Carofiglio, is the way his policemen philosophize:


“I like finding out what happened. In so far as it’s possible. I like that people trust me and decide to tell me what they know, even in the most unexpected situations. I like it when what I do – and it does happen – gives a little dignity back to those who’ve lost it. It gives meaning to chaos.”

The problem is that we like to control everything: a stupid, pointless, unhealthy idea. We need to have the opposite attitude, accept the fact that nobody really has any control over his or her own life: that was what the barman Nicola, from the Caffè Bohème, had said to him once.

One day at a time. He had also added that it’s a good rule not to take anything personally. We think that everything revolves around us: both what other people do and what they don’t do. It’s almost never true. Things happen and that’s it; most other people are uninterested in us, for good or ill.

The quiet musings of Pietro Fenoglio, an intelligent man, as he works his way through the complexities of human venality and evil, demanding a reckoning for those not able to demand one for themselves. I like this pace, this path, and this person's journey. I will say that I found the bad actors all a bit interchangeable. I can't for the life of me remember one's name without looking it up to be sure I'm not misassigning another one's name to him. Nothing made by human hands can ever be perfect, can it. But very damned good, this one's got locked down.