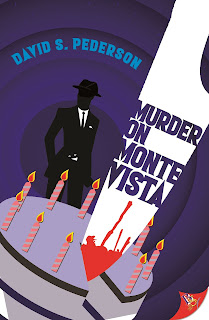 The Publisher Says: It’s 1946, and on a hot spring night in Phoenix, Arizona, things are only beginning to heat up at the Monte Vista Road home of flamboyant decorator Walter Waverly Wingate.

Private detective Mason T. Adler isn’t thrilled to be turning fifty, and the party Walter throws him makes him even more uncomfortable. Walter has arranged a special birthday present for Mason: a private hour with the handsome, young Henry Bowtrickle in Walter’s upstairs bedroom. But the night turns deadly when his birthday gift turns up murdered.

The room was locked, no way in or out, and only Henry and Mason were inside. Mason Adler is on the case, but he is also a suspect, along with the other assorted party guests who were all downstairs at the time of the stabbing. Or were they?

My Review: What I expect from a first-in-series mystery is simple: Let me know what this world is about; let me in to the characters' interrelatedness; and tell me what kind of crimes we're going to be dealing with.

Can't say I didn't get all those things...a little bit too much of 'em.

The story is of Mason Adler, newly fifty gay man, and his social circle: gal-pal Lydia, long-term frenemy Walter, and cop Emil. Various peripheral people step a measure before us, but no one else really matters. The main thing about a series mystery is the series, not the mystery, and that very much comes true here. By the halfway mark there's no body worth mentioning. Things are slowly unfolding, and the tensions of Mason Adler's life are lying before us prior to a murder accelerating the plot.

Possibly one of the most mean-spirited murders I've ever encountered, spite and envy fueling the circumstances that enable the murder to take place, and then the dead body comes in for a lot of muffled amusement because of how the whole plot evolved. There wasn't much to recommend the dead one, but there was little enough to recommend a lot of these people.

Phoenix, Arizona, is a place I've never, ever wanted to be the few times I've been there. I dislike deserts. I was transported to Phoenix circa 1946 with the author's major characters. It was darn near told in real-time vignettes. I got the sense of the oppressive, horrifying heat, the blasting, battering sunshine, the dreadful helplessness of life in this kind of nightmare before home air conditioning was ubiquitous in the US. (Even with air conditioning I don't want to be in Phoenix or any other desert city. Or town. Or hamlet. Or structure. Or outdoor space.)

So there was that going against the read. The pluses were the economy of the author's characterization. He needn't linger over loving descriptions because he chooses the details that actually matter and doesn't linger on them. He also doesn't clutter up my mental landscape, choosing instead to focus on the telling details. It was a way of bringing me a vivid, textured experience without using a lot of words to do it.

But at the end of the read, I was just...repelled...by the murder's cruel, appalling conception. (Murder will never not be cruel! I'm going on about the *circumstances* not the act.) The person whose life was taken didn't get, in life or after, near enough sympathy. Then there's the person whose idea erected the framework for the murder...I truly do not ever want to see that person in this series again.

I'll certainly move on to the next entry in the series. I won't be likely to revisit this one, though. 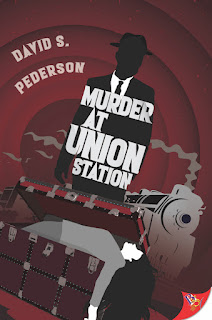 At close to midnight in the Union Station baggage room, the air is hot, still, and thick. The eleven forty-five Golden State Limited to Los Angeles is approaching rapidly when the baggage handler, Alfred Brody, notices a stray hound dog sniffing around one of the steamer trunks. The horrific discovery of a body inside the trunk can mean only one thing: there’s a murderer among them.

The young woman was certainly murdered, but who did it, and why? Suspects and motives abound as Private Detective Mason Adler investigates. He soon realizes that nothing, and no one, are what they seem to be as he races to uncover the truth and bring the real murderer to justice without becoming the next victim.

After the nasty stunt he pulled in the first book, I really don't want to believe it's going to go well for him vis-a-vis this series, if we're going to keep seeing Walter. But the good part is the mystery Author Pederson chose this time is one ripped from the century-old headlines! I was really curious to see what would happen next.

What happens is the requisite amount of banter, a close friendship between a straight woman and a gay guy, bitchy-queen Walter being a complete cow when he wasn't being a tedious crook, oh let's see...hm...oh, Emil the cop being bested by Mason again like Perry Mason beats Hamilton Burger in every contest...um...the murder was done in vain as no one gets away with anything in these books.

I don't think this one took quite as long as the first one, but these aren't propulsive "...and then what happened?!" reads. They're going to take you down the path the detective treads with him, and cause you to get your helper's badge on your efforts and merits. I particularly liked the detail of Mason's car being a 1939 Studebaker Champion, famously a cheap-to-run and stodgy vehicle. The kind of car Uncle Dale drives to Thanksgiving and parks in front of the house despite everyone urging him to take the bus. 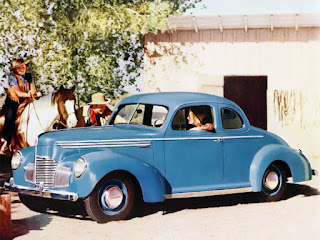 By the standards of the day, a real plain-jane-mobile though I myownself would love to have one.

The unmaksing event that Mason stages is very interesting, and not something I expected. Let's just say that Lydia is a useful gal-pal indeed. I was very interested in the book from giddy-up to whoa, and will certainly seek out the next Mason Adler mystery to check in on everyone, make sure they're doing okay.