LIE WITH ME, a récit about the formative powers of love translated by Molly Ringwald 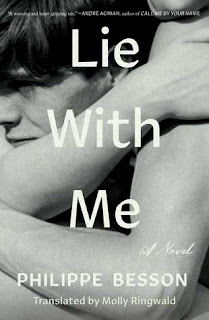 The Publisher Says: The award-winning, bestselling French novel by Philippe Besson about an affair between two teenage boys in 1984 France, translated with subtle beauty and haunting lyricism by the iconic and internationally acclaimed actress/writer Molly Ringwald.

Just outside a hotel in Bordeaux, Philippe chances upon a young man who bears a striking resemblance to his first love. What follows is a look back at the relationship he’s never forgotten, a hidden affair with a gorgeous boy named Thomas during their last year of high school. Without ever acknowledging they know each other in the halls, they steal time to meet in secret, carrying on a passionate, world-altering affair.

Dazzlingly rendered in English by Ringwald in her first-ever translation, Besson’s powerfully moving coming-of-age story captures the eroticism and tenderness of first love—and the heartbreaking passage of time.

My Review: I've spoken in previous reviews about the power of the (mostly) French art form, the récit, an ill-defined, "you'll know it when you see it" form of literary tale-telling. And all those ambiguous layers of the latter phrase, from straightforward "telling a story" to "tattling on someone" to "inventing a lie" are each present in the récit itself. The qualities I can suss out as being sine qua non for a work to be a récit are length—brevity is the soul of wit, lingerie, and récits—and interiority. Nothing describable as a récit can take place in "real time" or include voices not mediated by the narrator and/or author through a single tightly focused lens. If you've read Camus's The Fall, you've read a peak-experience récit. If you didn't like reading it, I venture to suggest that you not pay a lot of attention to the genre.

Brevity this book has: In 148pp, Besson tells the oldest gay love story there is: Boy meets boy; boy loves boy, is loved by boy; neither one says the right "wrong" thing to his belovèd to make the "forbidden" connection happen; and they go their separate, unequal, always intertwined ways. Interiority it simply is: All the words we read are Philippe's or Philippe's reports of conversations recently or distantly past. Philippe-the-narrator tells us several times that, as a novelist, he makes stuff up; he implies that he's done that habitually; so we're left to our own devices to decide about his honesty, his accuracy, and his intentions in telling us this tale.

I'm going to let you read Philippe-the-author and Philippe-the-narrator's words unmediated by my own commentary on them. In my own way, I want to honor the form of the récit as a review. The book is beautiful for many reasons. Translator Ringwald has made a beautiful thing in this book. I haven't read the French text, but I know enough from previous Besson encounters to believe this is a deft and charming rendering of his original. As to Besson's tale told...well..."is it autobiographical" is the first line of defense against immersion into the unreliability of Memory that this, a beautiful and moving and elegiac récit, invites its readers to experience. I recommend reading it, experiencing it, absorbing its beauties and funnies and rawnesses, without any additional removes from immediacy. Don't, then, place harsh lights on it or look for factual details in it; let it become the limpid waters of Monet's water-lily pond for your inner reader's delight and refreshment.


I'm not beautiful, but I get attention; that I know. Not because of my appearance, but because of my {good} grades. "He is brilliant," they whisper, "much more advanced than the others, he will go far, like his brother, this family is one to be reckoned with." We are in a place, in a moment, where nearly everyone goes nowhere; it garners me equal parts sympathy and antipathy.


Upstairs, after climbing a makeshift staircase, you would enter a room full of anything and everything. There was even a mattress. It was on this mattress where I rolled around in {his first love}'s embrace for the first time. We had not gone through puberty yet, but we were curious about each other's bodies. His was the first male sex I held in my hand, other than my own. My first kiss was the one he gave me. My first embrace, skin against skin, was with him. ... Today I'm struck by our creativity because at the time, there was no internet, not even videocassettes or cable TV. We had never seen any porn, and yet we still knew how to do it. There are things one knows how to do even as a child. By puberty, we would be even more imaginative. That would come fast


A million questions flash through my mind: How did it begin for him? How and at what age did it reveal itself? How is it that no one can see it on him? Yes, how can it be so undetectable? And then: Is it about suffering? Only suffering? And again: Will I be the first? Or were there others before me? Others who were also secret? And: What does he imagine exactly? I don't ask any of these questions, of course. I follow his lead, accepting the rules of the game.

He says: I know a place.


I discover that absence has a consistency, like the dark water of a river, like oil, some kind of sticky dirty liquid that you can struggle and perhaps drown in. It has a thickness like night, an indefinite space with no landmarks, nothing to bang against, where you search for a light, some small glimmer, something to hang on to and guide you. But absence is, first and foremost, silence. A vast, enveloping silence that weighs you down and puts you in a state where any unforeseeable, unidentifiable sound can make you jump.


He says that for me things are simple, that everything will be fine, that I will get out of it, it's already written, that there's nothing to worry about, the world will greet me with open arms. Whereas for him there's a barrier, an impenetrable wall, forbidding him to deviate from what has been predetermined.

Whenever he mentions this question of the forbidden I will try in vain to show him that he's wrong.


A few weeks later he'll take me for a ride. He'll pick me up at the edge of town, with a helmet this time. I don't know if it's as a precaution, to respect the law, or so that we won't be recognized, but I get on the back of the bike and hold on to him. We drive at high speed along back roads, through woods, vineyards, and oat fields. The bike smells like gasoline and makes a lot of noise, and sometimes I'm frightened when the wheels slip on the gravel on the dirt road, but the only thing that matters is that I'm holding on to him, that I'm holding on to him outside.


...there is often a staggering intimacy between us, a closeness beyond imagining, but the rest of the time our separateness is absolute. Such schizophrenia could bring even those with the strongest equilibrium to the edge of reason, and let's admit it, I didn't have much equilibrium to begin with.

There is the insanity of not being able to be seen together. An insanity that is aggravated in this case by the unprecedented situation of finding ourselves in the middle of a crowd and having to act like strangers. It seems crazy not to be able to show our happiness. Such an impoverished word. Others have this right, and they exercise it freely. Sharing their happiness makes them even more happy, makes them expand with joy. But we're left stunted, compromised, by the burden of having to always lie and censor ourselves.

This passion that can't be talked about, that has to be concealed, gives way to the terrible question: if it isn't talked about, how can one know that it really exists? One day, when it's over, when it finally comes to an end, no one will be able to attest to what took place.


...I hurry to get what I want before he changes his mind. I take the picture. In it, he's wearing jeans, a plaid shirt with rolled-up sleeves. He has the blade of grass between his fingers and he's smiling, a slight, complicit smile, almost tender. This smile devastated me for a long time after, whenever I happened to look at this photograph. It upsets me even now as I write these lines and contemplate the image, resting on my desk, right next to my keyboard. Because now I know. I know that {he} consented to this single picture only because he knew (had decided) that it was our last moment together. He smiled so that I could take his smile with me.


I know that there are those who will object to my refusal to accept that he changed course, switched orientation, simply succumbed to a feeling that was previously unknown to him. I could be seen as upset, jealous, or even obtuse, and yet I persist in thinking that he put the same stubborn application into this as he did to his work. The same desire to forget himself, to return to the righteous path set out by his mother, the only one permissible. Does he end up believing it himself? That's the fundamental question. If the answer is yes, then moving forward in life would be possible. If the answer is no, then it is a life condemned to interminable misery.


(I correct myself because I've just been lying. Of course, it took time, a lot of time, before I admitted that everything was lost, before I decided to say goodbye forever. I kept hoping for a sign. I thought of initiating another meeting, I started letters that I never sent. Desire does not go out like a match, it extinguishes slowly as it burns into ash. In the end I gave up on all possibility of a reunion.)


...I live with a man with a man who is fifteen years younger than me and doesn't like boys but loves me. Who knows why? It's a vulnerable relationship, and I will be scared to disturb this precarious equilibrium. Calling {him}, talking to him, asking to see him again, would be anything but innocuous. I cannot say: This is only a phone call. I know it's more than that. Even if I were granted immunity, the act of calling him has the allure of betrayal (we come back to that, always we come back to it) or without going to that extreme, a gesture toward {him} would be a gesture of mistrust toward the man I live with—a decision to put distance between us, to admit to a love that is not enough.


In that first moment, when he heard me say that I had seen you, he didn't move, but I swear he lost his balance. At that exact moment I was certain that he had been in love with you. That such a thing had existed—my father in love with a boy. I didn't need to ask him the question. I couldn't have found the courage anyway. Afterward, I said to myself: Maybe it was just a phase. Okay, yes, it existed, but it ended. He moved on to something else—to a life, a woman, a child...that must happen often, these things. I told myself: when he saw you on TV, it brought back the memory, but it was just nostalgia. A secret from the past...everyone has secrets; besides, it's good to have things that belong only to you. I could have stayed there. It should have stayed there. Except that two days after our conversation, my father brought us together to announce he was leaving.