What an interesting question it poses. Do we in fact have free will? Does the ability to foresee more than one future outcome to the present mean change is possible, or merely that some choices are okay to make?

I love the answer. Read it, it's free. 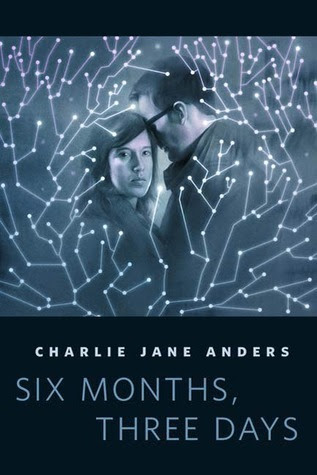 The Publisher Says: NBC is putting Charlie Jane Anders’ Six Months, Three Days into production and we could not be more excited! Tor.com published the Hugo award-winning novelette in 2011.

From Deadline Hollywood, NBC is adapting the story into...

...a light procedural about a mismatched pair of San Francisco private investigators — an upbeat, free-spirited idealist and a swoon-worthy, brooding fatalist –- both of whom can see the future. Forced to team up, the pair knows their relationship is destined to grow from antagonistic rivalry into fairy-tale true love… but only if they can stop him from being killed in six months and three days. The adaptation will being written by film and TV writer Eric Garcia, author of the novel Matchstick Men, on which the feature film was based. Ritter, Garcia, Janollari and Silent Machine’s Lindsey Liberatore are executive producing.

Charlie Jane had this to say over on io9...

I was really blown away by how many people connected with this story, both with the characters and with the ideas. After a decade and a half of toiling in obscurity as a fiction writer, it's beyond intense when something you wrote takes on a life of its own like that. Knowing that something that came out of your head is living in other people's heads, is enough to make your head explode. I felt way beyond lucky.

So then hearing from other creative people that they want to turn my story into something brand new and different is kind of that same feeling of astonishment and luck — only maybe even more so, because of the realization that smart people are putting time and energy into the idea of adapting your story. Whatever happens with this deal, I will never stop being thrilled about that.

A huge congratulations to Charlie Jane Anders! And a thank-you to editor Patrick Nielsen Hayden for acquiring the story for us. This remains one of my favorite stories we have had the honor to publish. If you haven’t read it yet, you can do so here. And then get the popcorn ready for TV night!

That quote has always chilled me. I don't want to see myself as others see me, thanks. Burns's point is that we should not wish for that, ever, because the burden of knowing what another person thinks, sees, feels is quite impossibly heavy and unbearable. Think of how many times in this good life you've wanted not to know what you yourownself thought, felt, saw.

Charlie Jane Anders, a smallish fixture in the SFnal world with a good reputation as a storyteller and a nice lady, imagines for two people the horrid, heavy burden of seeing the future...exacerbated or ameliorated by their discovery of each other and their subsequent, doomed relationship. After all, seeing the future means knowing how it ends, right?

“I don’t think you’re any more or less powerful than me. Our powers are just different,” Doug says. “But I think you’re a selfish person. I think you’re used to the idea that you can cheat on everything, and it’s made your soul a little bit rotten. I think you’re going to hate me for the next few weeks until you figure out how to cast me out. I think I love you more than my own arms and legs and I would shorten my already short life by a decade to have you stick around one more year. I think you’re brave as hell for keeping your head up on our journey together into the mouth of hell. I think you’re the most beautiful human being I’ve ever met, and you have a good heart despite how much you’re going to tear me to shreds.”

Or does it, wonders Judy, mean that she can make changes in small things and thereby change the future? Is it in her power to alter the inevitable? Doug doesn't think so. Doug is a committed and convinced determinist. He sees only one future, and he's sure he's correct about its inevitability.

Judy sees, on the other hand, a multiplicity of possible futures, and must weigh in a matter of a blink which one she will choose. Pause a moment and consider that. Doesn't that degree of personal accountability for one's life's course sound appallingly dreary?

And now imagine for a moment the sheer relief of finding and spending time with the one other person on the planet that fully, as fully as humans can anyway, Gets You...while knowing that your love is doomed. (See the title for a clue.)

Do you lie down and weep for what can't be changed? Do you rail against the cold, merciless gawd who lumbered you with this "gift?" Or do you break the rules, test the limits, fight for yourself and your happiness, by doing something, anything, to take your future into your own hands?

This work is licensed under a Creative Commons Attribution-NonCommercial-ShareAlike 3.0 Unported License.
Posted by Richard at 12:06 AM