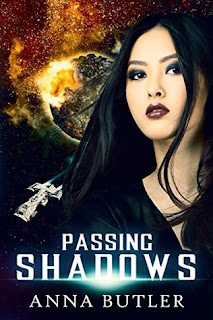 The Publisher Says: Li Liang has found a berth to suit her: chief pilot and first officer of the all-female crew of an old space freighter, the Sappho. Then one ordinary, unremarkable morning, Liang retunes the Sappho’s communications systems just in time to catch the breathless, terrible accounts from Mars of the total destruction of Earth.

Earth’s a cinder. The unknown alien race that destroyed it has left Mars, too, in flames and is ravening outward from the solar system, devouring every human colony on the way. Liang’s one of the few survivors, racing ahead of the Devourers, rescuing as many frightened, shocked people as she can. Will Liang and the pitiful remnants of humanity find a new haven, somewhere to start again? Or will she, too, echo the dreadful last message coming out of their dead home?

Remember how much I liked the first four books? If not, refresh yourself by reading up on the pleasures of Bennet and Finn's world coming crashing down around their ears as they, fine fighting men that they are, do their dead-level best to mitigate or even prevent it from happening. That was Author Butler's first assault on me.

The second was making Bennet and Finn fall head-over-heels in love with each other. Despite Bennet's long-term relationship with Joss, Finn's love-'em-and-leave-'em history, Bennet's career in the spy corps, Finn's posting to Bennet's anti-gay father's ship....

And now, with this lovely tale of Liang and Alice and Matt and his loves...well...the damage, she is irretrievable. Because now we find out what happened to Earth, what this has done to the survivors, how the men and women of Humanity's diaspora likely lost their belief in the monotheistic gawd I so ridicule them for bothering themselves to believe in in the first place. I mean really, how could one take seriously a gawd that allowed the original home of your species to get utterly blown into ash and smithereens?

Of course the question of how they found and resurrected the Egyptian pantheon will niggle at me until Author Butler gets sick of my emails alternately demanding and supplying ideas for that lacuna's filling-upping. My current favorite: Bennet, retired from Shield, takes Finn, retired from Fleet, on a honeymoon to an archaeological dig on a newly relocated planet where Humanity stopped for a while and left behind clues about the Egyptian pantheon's recrudescence.

Yeah, Author Butler's quiet about it too. *sigh*

Anyway. This novella is an afternoon's read, it sets the stakes for Bennet and Finn's world, and it contains this author's trademark homophile characters complete with real-life reasons to do what the plot tells them to. I like the series. I like the prequel. I suspect the Devourers have not vanished from Taking Shield. And I am eager to get the next full novel.

Like, REAL SOON. *glowers Blightyward*
Posted by Richard at 6:30 AM