TASTE OF MARROW, follow-up fun to RIVER OF TEETH 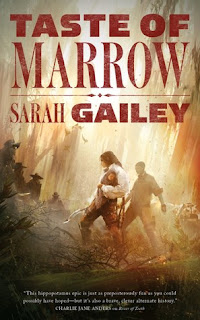 The Publisher Says: A few months ago, Winslow Houndstooth put together the damnedest crew of outlaws, assassins, cons, and saboteurs on either side of the Harriet for a history-changing caper. Together they conspired to blow the damn that choked the Mississippi and funnel the hordes of feral hippos contained within downriver, to finally give America back its greatest waterway.

Songs are sung of their exploits, many with a haunting refrain: "And not a soul escaped alive."

In the aftermath of the Harriet catastrophe, that crew has scattered to the winds. Some hunt the missing lovers they refuse to believe have died. Others band together to protect a precious infant and a peaceful future. All of them struggle with who they've become after a long life of theft, murder, deception, and general disinterest in the strictures of the law.

My Review: This quote about sums up the basic operating principle of this follow-up to River of Teeth:


"Alone and lonely ain’t the same thing at all," Hero said, shaking their head.

At the end of River of Teeth, the dramatis personae are forcibly scattered when the caper...do pardon me, operation...reaches a satisfying if not successful conclusion. I say "not successful" because Winslow Houndstooth's carefully planned...operation, all perfectly aboveboard, not a caper at all...for the elimination of feral hippos (HIPPOS!!!) from a section of the Mighty Mississippi goes quite wrong and ends up making the feral-hippos problem more widespread.

The opposite of good.

But more to the point of our story here, Winslow's dearly beloved Hero the non-binary munitions and poisons expert, is separated from him. Archie the fat Frenchwoman, Houndstooth's longtime friend and co-caperer, loses contact with Gran the U.S. Marshal that's hunting vanished Adelia the assassin and traitor to their caper...operation...whose interference separates the scooby-group into two pairs. And so our story begins.

It's safe to say that the actual search of the two pairs of conspirators for each other is not the point of the book. It is far more the case that the emotions of the separated lovers are the point. Archie is pining for her big, beautiful lawman, despite the fact that she's a confidence trickster who's given zero apparent thought to how that's going to play out. Houndstooth, her longtime friend, unravels into obsession with his vanished Hero and makes the world around himself into the projection screen of his misery. He tests his friend Archie to and past the breaking point with his rage at the injustice of Hero's disappearance. He takes exactly no notice of Archie's pain in her separation from Gran the lawman.

Adelia and Hero, the second pair of caperers, are left thinking Archie and Houndstooth are dead. They're also the subject of a plot by an unknown bigwig baddie to force assassin Adelia into a murderous plot despite her determination to remain retired from death-dealing. Hero refuses even to think about their beloved Houndstooth, dead in the by-blow of feral hippo killing blasts. They help Adelia with her new baby. They recover from non-fatal but very serious wounds that were dealt them by the aforesaid Adelia. And, all else aside, they stay with Adelia to execute the final stage of the failed caper. Mostly because they need something to do, some action to take in order not to remain still and therefore finally face up to their grief at Houndstooth's loss.

And the spoilery bits are now open.

All is resolved. The unhappy separations are ended. The reveal of the big baddie's identity is quite quickly over and done, along with a condign fate for the rotten asshole. The problem that ignited the entire series...feral hippos in the Mississippi...isn't remotely touched by the plot's hurried and incomplete resolution.

But HIPPOS. IN. THE. MISSISSIPPI!!!

It's $3.99 and it's fun and it's got such promise as a writer's declaration of imagination. Give it a whirl.
Posted by Richard at 9:58 AM