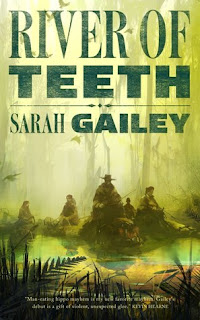 The Publisher Says: In the early 20th Century, the United States government concocted a plan to import hippopotamuses into the marshlands of Louisiana to be bred and slaughtered as an alternative meat source. This is true.

Other true things about hippos: they are savage, they are fast, and their jaws can snap a man in two.

This was a terrible plan.

My Review: Okay, there's this little-known weirdness about the Congress actually considering the importation of hippos for real in the early 20th century...see my four-year-old review of the Kindle Single for my take on that...but it went nowhere, thankfully.

Also thankfully Sarah Gailey got wind of this deliciously loopy piece of fucked-up thinking. This novella is a terrific playful use of reality's undercooked braining. I can't be any more pleased about that.

I could be a bit more pleased about the novella. No. WINKING! Not at all, not ever, not even the three times in this book. *ahem*

But the main source of my discontent is the slightness of the characterization of Winslow, our "British"-or-maybe-not hero. He's very intriguing which is the source of my mild disgruntlement. Just as we're getting to know him, *whiz* offstage he goes with Archie the stout and stout-hearted confidence trickster...and just as *she* is getting interesting, what with her tendresse for U.S. Marshal Gran! Who barely registers before his search for the evil Adelia fails and he has to get our non-binary fascinator Hero to medical help...

...am I making myself clear? There is a LOT going on in these pages, all of it fun, much of it necessary, and some of it far too glossed over. More room for Mama's goodness, please. Yes, there's a sequel and I will be reading it soonest, but this is literary coitus interruptus.

I was delighted by the comeuppance delivered to the very appropriate party at the end; I was hugely relieved that the author provided us with a timeline at the end of the book; but really, there's only one thing that I can't explain away or make better with rationalizations: Handwaving away the Civil War. This wasn't a fixable slip-up. The fact is that hippos in the Civil War would've changed things drastically given the location of the Harriet (our lawless, feral hippo-infested stretch of Mississippi marsh). Its construction in Louisiana would've made the economy of the state radically different; its slave or free labor demands would've changed the military calculus of the region in extremely significant ways.

So I'll accept a gayish hero, I'll go along with a non-binary person passing unchallenged, yup yup okey dokey mm hmm, but not the unchanged Civil War. That by itself would've cost a less gung-ho gonzo nuts author with a blah little idea all but one star. You, Sarah Gailey, disappointed me where a less talented writer would've made me snort derisively, roll my eyes, and Pearl Rule this bad boy. You're capable of better thinking than this elision of a central fact of US history.