THE BAD-ASS LIBRARIANS OF TIMBUKTU, an adventure story about books and the people who love them 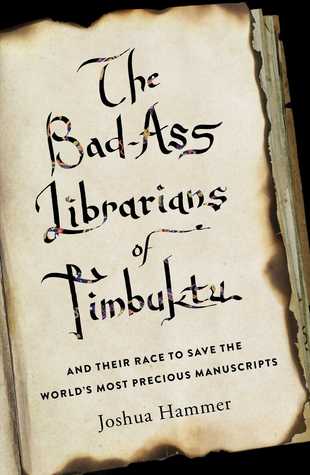 The Publisher Says: To save precious centuries-old Arabic texts from Al Qaeda, a band of librarians in Timbuktu pulls off a brazen heist worthy of Ocean’s Eleven.

In the 1980s, a young adventurer and collector for a government library, Abdel Kader Haidara, journeyed across the Sahara Desert and along the Niger River, tracking down and salvaging tens of thousands of ancient Islamic and secular manuscripts that had fallen into obscurity. The Bad-Ass Librarians of Timbuktu tells the incredible story of how Haidara, a mild-mannered archivist and historian from the legendary city of Timbuktu, later became one of the world’s greatest and most brazen smugglers.

In 2012, thousands of Al Qaeda militants from northwest Africa seized control of most of Mali, including Timbuktu. They imposed Sharia law, chopped off the hands of accused thieves, stoned to death unmarried couples, and threatened to destroy the great manuscripts. As the militants tightened their control over Timbuktu, Haidara organized a dangerous operation to sneak all 350,000 volumes out of the city to the safety of southern Mali.

Over the past twenty years, journalist Joshua Hammer visited Timbuktu numerous times and is uniquely qualified to tell the story of Haidara’s heroic and ultimately successful effort to outwit Al Qaeda and preserve Mali’s—and the world’s—literary patrimony. Hammer explores the city’s manuscript heritage and offers never-before-reported details about the militants’ march into northwest Africa. But above all, The Bad-Ass Librarians of Timbuktu is an inspiring account of the victory of art and literature over extremism.

My Review: A journalistic telling of a summer-blockbuster level tale...not that that's a bad thing!

What's most exciting in the book is the interaction of Al Qaeda and the resistance. What's least exciting about the whole story is the fact that we need to be told about the awful and hideous actions of the hate-filled anti-intellectuals who are, even as we speak, eviscerating an entire world's millennium of progress so their imaginary friend won't be mad at them.

And then there are the angry anti-intellectual greedy motherfuckers running the US government as an ATM for the world's wealthiest people.

And that, my dears, is 2017 in a nutshell. Books threaten these scumbags. They have to eliminate them somehow, and here in the US they've chosen the modern path of making them irrelevant, while in the old-school climes of Africa they physically destroy them. Same result. The forces of rage are out to stupidify the globe and it looks depressingly like they're succeeding.

But there are people like the brilliant, beautiful-souled Mr. Haidara. There are nooks in cyberspace where learning and passion for words still matter. There will always be a way to prevent the final night from falling.

It's more urgent than ever to remember that #READINGisResistance!
Posted by Richard at 6:30 AM