PINEAPPLE, a comic novel about the end of civilization told in verse...wait! Come back! It's good! 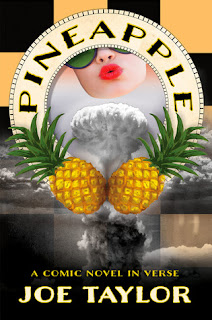 The Publisher Says: Welcome to Los Alamos, where the big-brained boys and girls are at it again. But atoms have turned passé: now it's the Higgs boson, which they are using to develop a clean, efficient weapon of mini-destruction, mysteriously dropping bodies into junior black holes within a fifty mile radius. Moreover, they're accomplishing this perfidy in comic rhyming quatrains. Can an intrepid group of six amateur do-gooders resolve the mystery and prevent the unleashing of this new WMD?

THE PUBLISHER SENT ME A REVIEW COPY. ALSO, I'VE KNOWN THE AUTHOR FOR A QUARTER CENTURY.

My Review: But anyone who's ever had a chance to hear my mouth on the subject of poetry knows that the best a friend who commits versification can hope for is silence from my general direction. It's better than what I'm likely to say, I assure you.

The sharp-eyed among y'all will note that this is a review, and carries a star rating, and isn't a bad rating at all. What gives? Well gather round, kiddies, and let Uncle Daddy tell you a little tale.

Waaaaaay back in the Mists of Time, I was a literary agent. A manuscript sailed over the transom one day, a humorous and bitter comedic romp about the North American Executive council of witches and their attempts to come to grips with a very, very bad madre of a witch in Florida (where else?) who was upsetting the cosmic balance in a big, nasty way. I was hooked. This was a decade before the paranormal book boom and I was sure the sheer verve and delight of the novel could ignite a movement.

It was Joe Taylor's manuscript that I couldn't, to my eternal chagrin, sell. But never mind, Joe was publishing good books via Livingston Press! Maybe I could, you know, movies or...but no. Sad to say, nothing ever eventuated except my snarky correspondence with Joe and a number of laugh-out-loud funny phone calls over the years.

So one fine day not so long ago, I got a missive from Joe telling me about this wizard idea he had for a comic novel about quantum mechanics (he's prone to saying things like that, I wasn't especially worried) where the End of the World was going to be brought about. Uh-huh, sounds cool, I said. Then Joe said IT: "I'm going to write it in rhyming quatrains."

"Are you out of your MIND? Joe, do you not WANT people to read your stuff?!" I shouted at my computer screen as I typed those very words.

Having heard the identical sentiments from me before about his dialect novel Oldcat and Ms. Puss, Joe tinkled a merry laugh and went about committing versification concerning quantum physics and the End of the World.

It's a darn good thing he doesn't listen to me. This is a comic novel of sharp, biting wit. This is poetry *about* something, not just its own pit-sniffin' self. This is what Daniel Defoe would be doing were his rotting zombie corpse to get access to a PC and a blogging platform.

It's impossible to quote poetry in a review. Well, damn near. And narrative poetry? Fuggeddaboudit.


It was a dark and bleary night. Which means,
I s'pose, Ol' Sol done gave it a rest.
Dave's dad, bandanna in teeth, was last Sol'd seen.
Now Ms. Moon watches two Hansons, a harsher test.

Do you think, by the way, sun and moon
communicate? Morse code? Telepathy?
Ah, but I promised no spiritual loony tune.
Still, it'd be nice to think they share empathy.

Nice layers of humor in there, doncha think? Suns and sons and moons and loonys...Joe knows how to make a word nerd grin, always has, and bless his cotton socks for it.

Will this book light everyone's fire? Nope. Will it light yours? If you're reading my blog, chances are it will. *I* liked a book of poetry! Even Joe was gobsmacked about that. Go on, be a devil, try out a small indie press's big indie author's seriously weird novel-in-verse. Hey, even if you hate it, you're gonna score big on the cooler-than-thou meter (see what I did there? haw) just having it on the coffee table.
Posted by Richard at 6:30 AM