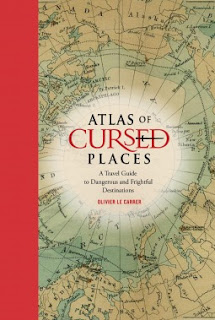 The Publisher Says: Olivier Le Carrer brings us a fascinating history and armchair journey to the world's most dangerous and frightful places, complete with vintage maps and period illustrations in a handsome volume.

This alluring read includes 40 locations that are rife with disaster, chaos, paranormal activity, and death. The locations gathered here include the dangerous Strait of Messina, home of the mythical sea monsters Scylla and Charybdis; the coal town of Jharia, where the ground burns constantly with fire; Kasanka National Park in Zambia, where 8 million migrating bats darken the skies; the Nevada Triangle in the Sierra Nevada mountains, where hundreds of aircraft have disappeared; and Aokigahara Forest near Mount Fuji in Japan, the world's second most popular suicide location following the Golden Gate Bridge.

THIS BOOK WAS A YULE GIFT TO ME. IT SHOULD BE ON YOUR BOOKSGIVING LIST TOO.

My Review: History, a ruling passion of my reading life, contains so many byways, culs de sac, and dead ends that are fascinating that it's a wonder the "real" history ever gets told. I love the odd and unsettling details that get lost when one reads only The Big Picture. There are very few byways left unexplored by now, wouldn't you think?

You haven't read this book yet.

Start here, in India. Most US citizens have probably heard of Centralia, Pennsylvania, at some point or another...a town that sits atop a coal mine burning out of control since 1962. Now multiply that by about fifty and set it in a country where there isn't any kind or sort of centralized authority charged with keeping people safe from the consequences of profit-driven environmental rape. Oh wait...that'd be 45's Murrikuh, so sorry. Anyway, the image of Hell that is Jharia makes Centralia look like a minor dump fire. 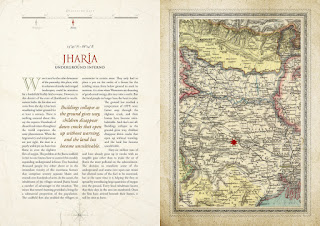 Then let's go back in time to Timur's reign of terror. In the uniformly awful 14th century, Timur (or Tamerlane as the West knows him) was memorably more heinous than his contemporary rulers and more feared than the only slightly more virulent Black Death that killed almost 50% of the world's population. He managed directly to slay over 15 million people of the 300 million alive on Earth at the time he was busily slaughtering entire cities. This ghastly spot is the site of his mausoleum. It bore the inscription, "When I rise from the dead, the world shall tremble." On 22 June 1941, a silly Soviet scientist raided his tomb; mere hours later, the Nazis began the unbelievably costly Operation Barbarossa, which cost over 5 million more lives, and led to the deaths of millions more in its wake. 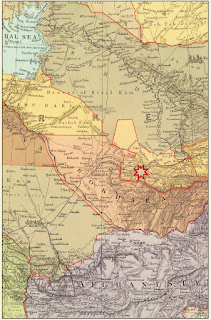 The moral of this story, kiddies, is DO NOT TAKE CURSES LIGHTLY.

Unlike the unbearably silly Lutz family that bought 112 Ocean Avenue in Amityville, New York, after ghastly Ronnie DeFeo slaughtered his family there the year before. They found out the hard way that there is no such thing as a deal too good to be true, lasting a whopping 28 days before bailing on this buy-of-a-lifetime Dutch Colonial in a desirable neighborhood. 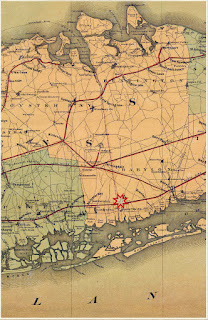 Lots of publicity still attends the case, and the Lutzes have been called liars and profiteers. Amityville's just down the road from here. It's a nice village and nice people live there. I myownself get no evil vibe from it. But I wouldn't spend a night at 112 Ocean Avenue for any damn reason.

For the ghoulish giftee, this book's the best!
Posted by Richard at 6:30 AM