SEA OF RUST, a scary, funny, beautiful End of the (Robotic) World novel 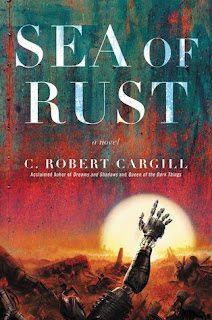 The Publisher Says: It’s been thirty years since the apocalypse and fifteen years since the murder of the last human being at the hands of robots. Humankind is extinct. Every man, woman, and child has been liquidated by a global uprising devised by the very machines humans designed and built to serve them. Most of the world is controlled by an OWI—One World Intelligence—the shared consciousness of millions of robots, uploaded into one huge mainframe brain. But not all robots are willing to cede their individuality—their personality—for the sake of a greater, stronger, higher power. These intrepid resisters are outcasts; solo machines wandering among various underground outposts who have formed into an unruly civilization of rogue AIs in the wasteland that was once our world.

One of these resisters is Brittle, a scavenger robot trying to keep her deteriorating mind and body functional in a world that has lost all meaning. Although she does not (cannot) experience emotions like a human, she is haunted by the terrible crimes she perpetrated on humanity. As she roams the Sea of Rust, a large swath of territory that was once the Midwest, Brittle slowly comes to terms with her raw and vivid memories—and her guilt.

THIS WAS A LOVELY SURPRISE BIRTHDAY GIFT. THANKS HONEY.

My Review: If you're a fan of cynical, witty anti-heroes who do what they have to do to survive in a world that doesn't much like them, read this book.


The one truth you need to know about the end of a machine is that the closer they are to death, the more they act like people.

If you're a fan of noir stories of monolithic world-dominating systems that give dissenters only a tiny sliver of room to exist, read this book.

If you want to read a fast-paced tale about survival against the odds, read this book.


These are the things that life is all about. These moments. It’s not about the rituals. It’s not about getting by. It’s about the stack of tiny little moments of joy and love that add up to a lifetime that’s been worthwhile. You can’t measure them; you can only capture them, like snapshots in your mind.

If you like the idea that nothing anywhere ever lasts, for good or for ill, this book should head your list of reads to come.


"You're not wrong, Jimmy. That's why we're all out here. To get through one more day."
He nodded, looking wistfully out into the street. "I miss it, you know. Being a bartender. But the people. I mostly miss all the people."
Most dying robots do. People gave us a purpose. Something to do all day, every day. At the end, I suppose, you spend a lot of time thinking about that. It's harder to get by when getting by is all there is.

Brittle, aka Britt, is our PoVbot. (I had no idea until this good moment that I'd been longing to type that always.) She is a she, a Caregiver bot, and she survived the war of extermination against the humans. She then survived the robot-vs-OWI...One World Intelligence...mainframes. There were six OWIs, now there are two surviving mainframe AI monoliths, and the battle is on between them to make all the bots left independent of the mainframes into facets (mobile extensions of the OWIs' superintelligence).

There's a weird sort of comfort in knowing that AIs compete ruthlessly for the same scarce resource that humanity's been competing for since forever: Subjects, foot soldiers, followers, believers, call them what you like. It could be an artifact of the concept "AI" being modeled after humanity's own rapacious, exclusionary concept of "intelligence." I tend to think not, as I fall into the darkly despairing cynical worldview camp. All advanced intelligence is primitive and savage because it's got perspective and sees its own destruction as inevitable, therefore there's no need to be "good" because this is it.

And my brethren and sistern, there are some *whoppers* that this book holds back from you only revealing at the end. Or The End, if you will allow me the punchy but cheesy overemphasis. It is a slow burn, this lie that Britt tells us. It is clear to me it's a foundational myth, and so escapes the opprobrium heaped on untruth in both human and bot society. But it might just merit that opprobrium after all, you'll have to decide for yourselves. Because you'll be reading this excellent novel. Honest and truly you will, or you'll regret not knowing what Cargill wants us to know.

I'll leave you with this unspoilery observation made by Britt early in the book. I think most of y'all will agree that it's an essential truth, a verity, a fact of deep meaning:


Respect for the dead is a human notion meant to imply that a life has meaning. It doesn't. Once you've watched an entire world wither away and die after tearing itself apart piece by bloody piece, it's hard to pretend that something like a single death carries any weight whatsoever.

And that, my olds, mes vieux, is exactly where we are.
Posted by Richard at 6:30 AM