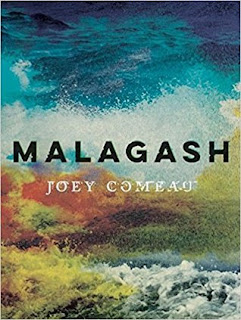 The Publisher Says: Sunday’s father is dying of cancer. They’ve come home to Malagash, on the north shore of Nova Scotia, so he can die where he grew up. Her mother and her brother are both devastated. But devastated isn’t good enough. Devastated doesn’t fix anything. Sunday has a plan.

She’s started recording everything her father says. His boring stories. His stupid jokes. Everything. She’s recording every single “I love you” right alongside every “Could we turn the heat up in here?” It’s all important.

I thought Malagash would be a small town, but it is not even that. One long road, a twisting paved red loop around the north shore of Nova Scotia. There's a tractor sitting in a field. A dirt bike leaning up against a shed. We pass a pen of llamas, who look bored as hell. The Atlantic Ocean itself comes right up to drive along beside us. Then it slips away.

The way he sounds, talking to my little brother, is different from how he sounds when talking just to me. I feel certain that it means something different too, even though the words are the exact same. This particular softness in my father’s voice is meant only for Simon.

It is a fact parents feel compelled to deny: Your relationship with each of your children is different. Each one has a different way of being themself, therefore a different side to show you and you to them. Sunday realizes this, and in realizing it pops a pustulent buboe on the buttocks of every parent/child problem: "You liked {sibling's name here} better than me!" And no parent ever says the simple truth, "Differently, darling child, never better." Routine denials, love all equally and other such impossibilities...Sunday does this wonderful bit of thinking for us all, and arrives at the correct answer. Comeau should win an award or two just for this.

I tell him that it will be our father's ghost. His memory. His echo. I tell him that a virus need not do harm. That not all self-propagating code is malicious. Our father's virus would never delete files. Would never steal passwords or spy on the intimate moments of strangers. Would not spread like cancer, but like a story. Would slip through fibre optic cables to cross oceans, would pass like radio waves through the walls of houses that nobody even knows are haunted. A ghost story that computers tell one another in the dark.

And with that, I died a little. I was utterly forlorn at the idea of a love so strong and sure emanating from a child to a parent. I never experienced that from either side. It made my own grieving heart stop with the loss I felt...not the loss of either parent, not the loss of my child, but the loss of love and family. I feel no love for my siblings, felt none for my parents, all of whom were adults when I was able to know them and self-absorbed, unkind, unpleasantly stridently needy adults who had no desire to listen to the likes of me.

And the family I could have formed? Not to be. Death, despair, misery, but no family.

So reading this book was a giant act of catharsis and a huge relief to me.
Posted by Richard at 6:30 AM