THE LOST SKETCHBOOK OF EDGAR DEGAS, a beautiful novel told in a deeply immersive voice 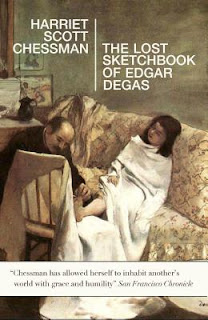 The Publisher Says: Ten years after Edgar Degas' 1872 visit to New Orleans, a lost sketchbook surfaces. His Creole cousin Tell -- who lost her sight as a young woman -- listens as her former child-servant describes the drawings and reads Degas' enigmatic words. It's both cryptic and revelatory, leading Tell to new understandings of her marriage, her difficult, brilliant cousin Edgar, her daughter Josephine, and herself.

***THE PUBLISHER SENT ME A REVIEW COPY AT MY REQUEST. THANKS JON!***

My Review: In the spirit of full disclosure, Harriet is my social media pal and the best of friends. It's unlikely I'd've published a negative review of the book under those circumstances, but equally unlikely I'd be so disrespectful as to puff up a book I did not enjoy. If you can't say anything nice, say nothing, is the tack I take on reviewing books by friends.

Luckily for the world, I absolutely adored reading this book. I have the good fortune to have seen a number of Degas's works in person, and I am familiar with New Orleans and its culture from years of contact with it and its practitioners. As I was reading the book, I'd come across things that spoke to me of the unique place that New Orleans is.


Honor reads a description of the city of New Orleans. Edgar appears to have written this on the eve of his departure. I almost can't listen, caught and struck as I am by some of the images: the city as a huge sleeping cat, washed and clean, or foul; something about Lake Pontchartrain's beauty. Something "glittering," something "humming." Lemon trees and orange trees. People of all colors. It moves me, in the wake of Edgar's despair, to discover in his own words how much he cherished about this city I love so much, in spite of all. What might have happened if he could have stayed, for a summer, another winter? Could he have felt healed? Could he have found comfort? Maybe even love?

It's not necessary to spell it out in blocks of visual data. In this case, as the narrator has lost her sight, it would be deeply suspect to do so. But what New Orleans is, in the end, is a place of the heart and soul more than a physical entity. New Orleans is either your home or it isn't, and you're aware of the answer from the second you arrive. It is undeniable and it is for life: You're a yat at heart or the magic is lost on you.

The magic is lost on me.

That doesn't mean I don't get it, though. I get what draws people to the place. I think Chessman's words vivify the spell of New Orleans as much as they limn the landscape of art. The narrative device of a lost sketchbook filled with New Orleans's grace and beauty by one of the leading artists of the time read to a blind woman relative of that artist by one of the subjects of his art is delightful. It requires no effort to understand...and that's the highest compliment I can offer a writer irrespective of the genre in which she works. Framing devices are too often part of a Conversation With The Reader. I don't appreciate that kind of story. I want you to lift me out of my comfy reading posture and transport me to your story's locale without making blaring announcements like a train's conductor does.

And that is Harriet Chessman's gift.


Here on my lap is something Edgar held once, and many times, something he opened, often, to record what he saw in our pretty, messy, crowded house. I wonder if Edgar still misses this sketchbook. I wonder what his days are like now. He must have filled dozens, hundreds, more such books since that winter when he was our guest.

In a passage tesserated from simple words, the complex conceit of the book takes shape. Telly, our blind point-of-view character, vivifies the world Chessman creates for us to inhabit. Telly is never obtrusive...she isn't the point of her own story, how typically female...she talks to us like she's across the tea table, she chats with us as she would any friend come to wile away an afternoon. It becomes more and more obvious to the reader that Telly inhabits her time with her cousin Edgar as old people inhabit their past. She is the mother of young people, she is the wife of a good man, and she is blind. She is blind in her eyes and she is blind in her heart and she gropes for understanding at every turn, physical or psychical.

Over the course of these 130-ish pages, I felt myself adjusting my reading speed to expand my pleasure in Telly's company. Odile and Honor came to feel like intruders, not one a beloved child and the other a welcome visitor. I was jealous of the attention they commanded from Telly. How silly, I'd tell myself, as annoyance whipped through me at Telly addressing one or the other. As it happened, Edgar, to whom Telly speaks in her memories of the past, elicited no such response from me. I was, instead, a full participant in Telly's relationship to her glamorous Parisian cousin.

I love reading books where I am that fully engrossed, carried out of the 21st century. It's a pleasure to be made that transparent to one's own eyes. I recommend this read to anyone looking for an immersive experience that won't require an entire month to read but will leave food for thought to keep you ruminating for months to come.
Posted by Richard at 6:30 AM