WHITE SILENCE, a suspenseful thriller to give your Disaster Magnet friend 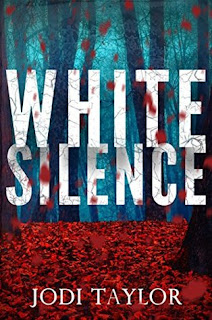 Elizabeth Cage is a child when she discovers that there are things in this world that only she can see. But she doesn’t want to see them and she definitely doesn’t want them to see her.

What is a curse to Elizabeth is a gift to others – a very valuable gift they want to control.

When her husband dies, Elizabeth’s world descends into a nightmare. But as she tries to piece her life back together, she discovers that not everything is as it seems.

Alone in a strange and frightening world, she’s a vulnerable target to forces beyond her control.

And she knows that she can’t trust anyone…

White Silence is a twisty supernatural thriller that will have you on the edge of your seat.

My Review: I cannot believe I did it voluntarily. I mean, I'm completely current in Author Taylor's The Chronicles of St Mary's series...eight novels, eleven novellas and stories released...so I can't plead ignorance of her vicious, violent, eviscerating cruelty. I have been reduced to a quivering heap of snot and tears by Author Taylor on more than one occasion. It's not like I didn't buy the book aware of what would happen to me.

In fact I was unable to read a part of the book around 16-17% because it triggered my personal issues around claustrophobia. I solved this by skipping ahead to the next chapter and inferring what happened from what was then going on. It was too much for my frail little fleur of a heart to live through Mrs Cage's horrid experience, and then in the chapter I skipped to there was an equally awful moment of encavmaphobia (google it) when I thought "oh right then, I'm going to close this file and quietly remove the book from my Kindle" but, at the end of the day, left it on there and just didn't read anymore.

Two months passed. I finished a romantic novel, last in a series I've been following despite the absurd and disgusting and overused winking trope that author insists on fouling her books with, when I thought to myself, "Self," I thought, "never in all the history of personkind would Author Taylor have a character *shudder* wink at another character. You are safe, Self, so finish up White Silence at last."

While Elizabeth Cage doesn't have a smooth ride in this book, she does have a fascinating psionic power and the range to use it. She is clearly unmoored by her beloved husband's death. She forms an attachment to a damaged spy that came rather out of nowhere. Her life is turned upside down by several of Author Taylor's trademark dreadful, sadistic maulings of her readers' emotions. I mean characters' arcs, silly me.

There is so much that happens in this book that giving a book report is almost desirable, but I shall refrain because spoilers make people very angry. Suffice to say that each event in the book will have repercussions within seismic shifts atop temporal tsunamis. Absolutely nothing is as it seems, which we know from about the 90% mark on, though the full and devious range of Author Taylor's sadism hasn't come anywhere near to being tested or revealed.

So I tell you true, reader, the Disaster Magnet (aka Jodi Taylor follower via the Chronicles of St Mary's) that you love will adore this book. It is risibly cheap at $3.99. You will get so many bonus points with your Disaster Magnet that you could come out as a 45 supporter or Brexiteer and earn no more than a hurt look and some tutting. And it will guarantee several hours of dead silence as your beloved slurps it down in which you can watch sports or planetary explosion movies or even go out with your buds and get no more than a vague wave and distracted "take your mother with you."
Posted by Richard at 6:30 AM