THE BOOKSHOP, Penelope Fitzgerald's Fanfare for the Common Woman Afoul of the Powerful 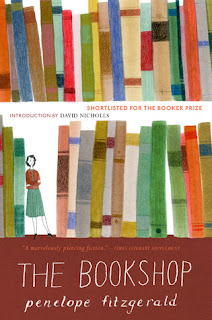 The Publisher Says: In 1959 Florence Green, a kindhearted widow with a small inheritance, risks everything to open a bookshop - the only bookshop - in the seaside town of Hardborough. By making a success of a business so impractical, she invites the hostility of the town's less prosperous shopkeepers. By daring to enlarge her neighbors' lives, she crosses Mrs. Gamart, the local arts doyenne. Florence's warehouse leaks, her cellar seeps, and the shop is apparently haunted. Only too late does she begin to suspect the truth: a town that lacks a bookshop isn't always a town that wants one.

My Review: Florence Green is my current idol of Resistance. She has lived quietly and unassumingly in Hardborough, a small East Anglian seaside town, and realized that her life was simply passing and not being lived. So she took her small inheritance and opened a bookshop.


A good book is the precious life-blood of a master-spirit, embalmed and treasured up on purpose to a life beyond life, and as such it must surely be a necessary commodity.

Of course, she takes out a loan against the freehold of her premises to start the business. The sums are risible by today's standards, since this is 1959, but they seem enormous to Mrs Green. She sets out to stock her business with the remainder stock of her former employers in London, then contacts publishers' sales agents to visit and display their wares:


Those who made it {to her shop} were somewhat unwilling to part with...what Florence really wanted, unless she would also take a pile of novels which had the air, in their slightly worn jackets, of women on whom no one had ever made any demand.

This being 1959, a certain degree of wincing at this self-deprecating, or merely invisibly sexist, humor is to be granted; but Fitzgerald wrote the novel in 1977 or thereabouts, as it was first published in 1978. Was this mildly misogynistic sally meant to be read with a raised eyebrow, or was she simply oblivious to its sexism? I don't know, but I'm guessing it wasn't ironic based on the tone of the tale. It's very funny either way.

Life as a business proprietor is not stress-free. Mrs Green is a busy, busy woman. Many are the factors she is required to balance in her running of the business. Yet summer comes but once a year, and after all what good is living in a seaside village if the sea is invisible?


She ought to go down to the beach. It was Thursday, early closing, and it seemed ungrateful to live so close to the sea and never look at it for weeks on end.

It's always seemed odd to me how many people I know here in my own seaside city who simply don't pay the slightest attention to the ocean that surrounds us!

Mrs Green has failed to do one crucial thing in opening her shop: Get the town's Great and Good on side. In fact, when she is invited to the local county set's meeting place, she receives a very simple and direct order to cease and desist her plans to open her shop in the Old House, which it transpires the local grande dame wishes to put to another use. To everyone's blank surprise, she does not back down. The invisible battle lines are drawn:


She had once seen a heron flying across the estuary and trying, while it was on the wing, to swallow an eel which it had caught. The eel, in turn, was struggling to escape from the gullet of the heron and appeared a quarter, a half, or occasionally three-quarters of the way out. The indecision expressed by both creatures was pitiable. They had taken on too much.

The battles go in Mrs Green's favor...until they quite memorably do not. The quality do not like being told no.

But the battles are waged fully! Mrs Green is not one to lie down and say die!


Courage and endurance are useless if they are never tested.

The tests are, in the end, simply more than Mrs Green has the resources to withstand. The state gets involved. The lawyers and the banks are not on her side. The town isn't willing to pull themselves out of the primordial muck of How Things Are Done to rally to her aid.


It was defeat, but defeat is less unwelcome when you are tired.

And yet Florence Green stood tall until the last moment, only leaving Hardborough when her very last farthing is needed to buy her way out of the morass that her impertinent refusal to bow before the quality has landed her in.

For that reason, I recommend this book for your 45-hating, Resistance fighting, Yule giftee. It will give them a rock to stand on.
Posted by Richard at 6:30 AM