AFTER THE PEOPLE LIGHTS HAVE GONE OFF, collection of horror shorts 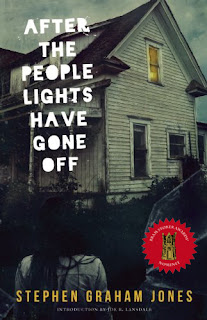 AFTER THE PEOPLE LIGHTS HAVE GONE OFF
STEPHEN GRAHAM JONES
The Dark House Press (non-affiliate Amazon link)
Out of print; various prices –OR– $11.99 Kindle edition

The Publisher Says: This collection of fifteen stories taps into the horrors and fears of the supernatural as well as the everyday. Included are two original stories, several rarities and out of print narratives, as well as a few "best of the year" inclusions. Stephen Graham Jones is a master storyteller. What does happen after the people lights have gone off? Crack the spine and find out.

With an introduction by Joe R. Lansdale.

I RECIEVED THIS BOOK FOR REVIEW FROM THE PUBLISHER. THANK YOU.

My Review: Sixteen novels, over two hundred stories, and a career of scaring the wits out of the susceptible-to-horror...all of these metrics modified by "and counting," as Author Stephen is not even fifty yet. There is a certain kind of story one expects from this hand, a deeply unsettling look at what it means to be Other and Othered in a world seemingly owned by the lowest, the least worthy. More often than not, white men. More often than not, they're using or abusing or oppressing an Indian (the word the author chooses most often, I suspect quite calculatedly) man and/or his family.

Well, that's not realistic at all, is it.

But what you will get here, you who venture into Author Stephen's mind palaces-cum-stories, is a very thorough grounding in the liminal spaces where consensus reality (eg, the built reality of a rest stop, the hallway of a 3-2 tract house) meets the Otherlands. The spaces between the two are always rife with, ripe and round and fertile with, the kind of stories that begin one way and subvert that in the end. Endings are, to this artist, the culmination and completion of an arc. Underpinning Author Stephen's arabesques of not-always-white reality-cum-fantastically hyperreal action are carefully drawn geometries of story, carefully obscured by inevitable-seeming developments. Story logic is a strong skill of Author Stephen's, I haven't read one piece of his work that isn't absolutely, from giddy-up to whoa, internally cohesive.

This absolutely gorgeous book deserves its very own post. I received and gave it a quick review in 2015; but that was before I was consistently using the Bryce Method of going story-by-story and before I was calling so heavily on the authors' own words to make my points about the entire collection. So now I'm dusting off my handsomely designed and beautifully illustrated paperback copy to deliver myself of these ideas and opinions.

Thirteen shows Author Stephen's deep and abiding fascination with the under-appreciated horror possibilities of small-town multiplex movie theaters. An underused venue, in my opinion, except for him; but the territory here is used to creep me out to the point that I'm actually *glad* that I can't go to movies because I'd need my Young Gentleman Caller to take me to the bathroom and wait for me. 4 stars

Brushdogs is a father's story, any dad out there knows this cold-sweat no-stomach hollow-head panic.


That had been his secret Indian Trick to hunting, back then: to not hunt. The same way you never find your wallet when you're actually looking for it.

Just keep a rifle with you.

Welcome to the Reptile House is *seriously* fucked up. A terrifying, violent undead being with its hand cupping the balls of a tattoo artist to compel his care and attention? And those tattoo needles? What a great idea for using them! Sure, why not. I don't need sleep. 3.5 stars

This is Love takes Jonathan and Lucas, a loving couple, where absolutely no one ever *wants* to go. Their damned dumb drama gets blown like smog out over all the strangers at the rest stop. Maybe...maybe it's just the drama-smog...please let it be the drama-smog...


Thinking the bad instead of the good, defaulting to disaster instead of joy, letting the world infect you. And you know better. That's no way to live.

It isn't the drama-smog. 4 stars The Spindly Man is an hommage à Stephen King.


"We were just talking about how if you admit devils," Drake said, "then that means the door must be open for angels as well."

"Or more demons," the spindly man said, sitting back in his chair. "Inside every angel, there's a demon waiting to claw out, right?"

That intonation (read it aloud, you'll see what I mean) and that supernatural-meets-Wednesday feeling perfectly evoke the numinous borderlands that Author Stephen seems to live in and the rest of us are just too scared to. 4 stars

The Black Sleeve of Destiny does for thrift stores what Halloween did for Wusthof sales. Who in their right mind ever gave a second's thought to a Goodwill hoodie with mismatched arms? There's just nothing scary about that image.

The Spider Box made my head hurt. All things geometry adjacent do, like this damn freaky box with no lid. But this time I was so worried about spiders coming out of my cereal box, or emptying like a spill of oil...well, it doesn't much matter where they go or what they do after that, does it? I'll be in the basement behind the boiler with the gun. Don't come looking for me. 4 stars

Snow Monsters is a weird take on why wishes are incredibly dangerous. I was skeeved from the beginning. 3 stars

Doc's Story just does not come from a normal guy's imagination. Werewolf story only totally inverted. I will say this: I got rid of my ball-peen hammer. Can't abide to think of the thing's shape anymore. 4.5 stars

The Dead Are Not does nothing to make me think the universe is one inch smaller than terrifyingly huge.


He hadn't really followed anybody, he told himself.

It was wishful thinking. He had needed the universe to be large enough to accommodate the remote possibility of Marissa surviving, and so had invented alien tourists who knew, and could divulge, the secrets of the universe.

It was wishful thinking.

Xebico didn't draw me in, somehow. I couldn't find the point where I would be able to enter the story's universe, none of the ambiguities were opening at my knock. Not a bad experience, not a good one either. 3 stars

Second Chances finds horror in the astringent, sanitary world of the lab. Maddy really, really needs to be made to take a vacation for an extended time. I found this more eerie than unsettling, but was all the way in from beginning to de-cocooning. 4 stars

After the People Lights Have Gone Off is a ghost-tale novella of deep and abiding scariness. I will not tell you one thing about it because it is a glittering, sharp-faceted gem from an ancient and malign deity's statue-eye. I will not rish my immortal soul just to convince you to read it. But I will tell you it gets 5 stars and my unprecedented urging for you to get the audiobook...this story should be read aloud.

Uncle goes into the half-mad, half-gleeful widowerhood of a man you suspect was never quite all there:


Later, I settled my red pointer on the late-show host's cheek. It made me feel like a sniper.

And then I checked the living room out.

The walls were warmer behind the set, cooler by the door. The lamp that I'd had on while eating was still comparatively hot. The late show host was on fire. The window was the Arctic, the ceiling indifferent, the carpet the same.

Then the audience on television exploded with laughter.

I nodded in acknowledgement, sighted along the top of the gun down the hall, to my bedroom, but stopped at Theresa's instead.

Everywhere else in the darkness, the temperature was hovering around seventy.

There was a spot right in her doorway, though.

It registered as body heat.

Does that make your vellus hairs go into the full upright and locked position? If not, I bet you don't care about sticking your feet out from under the covers at 2 a.m. Weirdo. 4 stars

Solve for X doesn't fit. Yes, it's dark; yes, it's horror; but it's the first time I've read one of Author Stephen's stories and thought, "duuude". This is more horrible than horror. Not for me, not at all (and not only because of the equations) (though they don't help). 2.5 slightly barfed-on stars