THE FIGHTING BUNCH, a little-remembered story of when elections mattered so much people rebelled to *retain* their vote 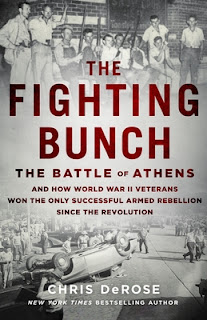 The Publisher Says: The incredible, untold story of the WWII veterans who destroyed a corrupt political machine―the only successful armed rebellion on US soil since the War of Independence.

They fought for freedom abroad and returned to find that they had lost it at home. A corrupt political machine was in charge, kept in power by violence and stolen elections - the worst allegations of vote fraud ever brought to the attention of the Department of Justice, according to the Attorney General.

The GIs formed a nonpartisan, all-veteran ticket. On Election Day, the GIs and their supporters found themselves assaulted, intimidated, arrested, and even shot. A small band of veterans - the Fighting Bunch - armed themselves and marched on the jail to demand an honest count. The sheriff and his men refused. These men who thought they had seen the last of war returned to the battlefield, one last time.

This episode in U.S. history has never been more relevant, but has never been fully told. At the time of the rebellion, national news outlets jammed the phone lines into town, asking questions before the shooting had stopped. Journalists beat a path to Athens from across the country. Hollywood came calling, but the people of McMinn County had moved on.

After years of research, including exclusive interviews with the remaining witnesses, archival radio broadcast and interview tapes, scrapbooks, letters, and diaries, author Chris DeRose has reconstructed one of the seminal―yet untold―events in American election history.

I RECEIVED A DRC OF THIS TITLE FROM THE PUBLISHER VIA NETGALLEY. THANK YOU. (I THINK.)

My Review: This book made me so sad.

There were once people who stood up to machine politics. People whose sense of honor forbade them to participate in the establishment of a single-party state.

Their grandchildren are now actively seeking to make that sense of honor, that duty to accept others' rights of access to the ballot box as a means of free speech, obsolete in the USA.

If you want to know what the Greatest Generation, in their youth and idealism, went to war for, it was NOT the enshrinement of a single point of view as the only acceptable one to express and uphold.

The three-hundred-plus pages of Author Chris DeRose's astonishingly well-researched (honestly, it feels as though this book was played out in front of him) story of one unique moment in our country's ongoing history of voter suppression did not fly by. Not because Author DeRose did not write the story well. They slogged past my tear-blurred eyes because these passionate rejecters of Conformity and Submission did not go on to spark a movement against the real perpetrators of the atrocity: The Powerful, the elite that could not care less what "party" label you mark your vote next to. After all, Boss Tweed said it best:

If your nineteenth-century history is faded to sepia tones, this will remind you of who he was and why Tammany Hall has so many lessons for the erstwhile democracy of the USA.

That rebellion lies in our future.

I hope and pray that it will come before I go for good.