HOW TO MAKE A SLAVE and Other Essays, a finalist for a National Book Award 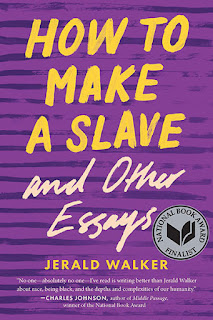 HOW TO MAKE A SLAVE and Other Essays
JERALD WALKER
Mad Creek Books
$19.95 paperback or ebook editions, available now

The Publisher Says: For the black community, Jerald Walker asserts in How to Make a Slave, “anger is often a prelude to a joke, as there is broad understanding that the triumph over this destructive emotion lay in finding its punchline.” It is on the knife’s edge between fury and farce that the essays in this exquisite collection balance. Whether confronting the medical profession’s racial biases, considering the complicated legacy of Michael Jackson, paying homage to his writing mentor James Alan McPherson, or attempting to break free of personal and societal stereotypes, Walker elegantly blends personal revelation and cultural critique. The result is a bracing and often humorous examination by one of America’s most acclaimed essayists of what it is to grow, parent, write, and exist as a black American male. Walker refuses to lull his readers; instead his missives urge them to do better as they consider, through his eyes, how to be a good citizen, how to be a good father, how to live, and how to love.

I RECEIVED A DRC OF THIS BOOK FROM THE PUBLISHER VIA EDELWEISS+. THANK YOU.

My Review: The reason we read essays, as readers, is almost the opposite of why we read fiction of all stripes, not to broaden our experience of humanness but to particularize it. Dr. Walker's essays about being Black in academia, in the slums of his boyhood, of being a small-town dad of sons who are Othered by their skin color, of being his own unique self in a world that wasn't ready with a place for him to fit, are as particular as one can hope to find. And that is why they resonate so fully with my older, whiter, place-was-made-before-I-cared self. How often have I wondered what in the hell I should say when my half-Black Young Gentleman Caller makes a joke about hair (I have next to none, his is abundant, and the contrast tickles him to no end. Ha ha ha) or his (pale) skin color..."I am closer in hue to a banana than a plum," says Dr. Walker at one point...and am left shtumm because, well, no matter that he's chosen an old white man for his confidant and bedmate, I can still hear the hurt in his voice or see it in the frozen-for-a-second smile when someone's comment is a microaggression. To my delight, my silence or my simple smiling and laughing without comment have kept me from experiencing that swallowed hurt at my words.

The years Dr. Walker spent in seeking an MFA were spent being mentored by James Alan McPherson, a monadnock of the Iowa Writers' Workshop, and one of the most admired and sought-after guides to the unforgiving world of seeking literary excellence. His story collection, Elbow Room, won him the first Pultizer Prize for Fiction awarded to a Black person. Who better to create another Black male artist? And so he did, in Dr. Walker, after some rough moments at the beginning of their association. He was capable of delivering great advice, and making it go down like a spoonful of sugar instead of the bitter and damned toxic draft of reality that it truly was:


"Stereotypes are valuable," he said. "But only if you use them to your advantage. They present your readers with something they'll recognize, and it pulls them into what appears to be familiar territory, a comfort zone. But once they're in, you have to move them beyond the stereotype. You have to show them what's real."

Without hesitation, he said, "You."

That one sounds so innocent...and the one-word lance through the armor and into the heart is why so many deeply talented and delightful writers don't ever quite make it, get past the early parts of a career. How cruel it is to have to commit to endless hours of honing and polishing and rending one's psychic flesh for a few grand on a good day, and free on a bad one! But success is all in practice and work, and no one in American history has known that more than our unappreciated and unsupported artists. So few make it....

But some become epoch-defining superstars. Memories of Michael Jackson, unsurprisingly, loom large in Dr. Walker's youth as it coincided with the man's inescapable pop-culture presence in the later 1970s and early 1980s. I drove around with Michael Jackson on the radio because he was what was playing, what was in demand, whose talent and sound were *exactly* what the Whitegeist wanted. He sounded, I realized from reading the essay about him, very different to a young Black boy in the Chicago ghetto. Dr. Walker and his brothers were caught up in a different stream of the times than I was, and this passage tells me what I need to know: We shared the planet, for better or worse, in ways that can't be fully reconciled but can be felt, deeply, in our love of someone who made something powerful and lasting:


While I do not know if this is true, I have a vague memory that the three of us, in 1983, watched the Motown 25 television special together, and maybe we rose at some point to to attempt Michael's moonwalk before collapsing back into our seats, succumbing to the dope coursing through our veins, much as dope would course through Michael's, nearly three decades later, and stop his heart.

Mine stopped, for a moment, when I heard the news. And in that pause before grief, I had a vision of the Walker Six, dancing and singing...and then it was gone.

How we all mourn our quiet fantasy lives being rendered impossible by death...and who hasn't dreamed of What Might Have Been?

A place where I felt Dr. Walker's essayistic honesty let me, his happy reader, down was in a passage about an older gay man who offered cold, wet Jerald a ride to where he didn't much want to walk. He was treated to a request for sex, and handled that unwelcome advance with apolmb. He wasn't pressured or forced, he just got out of the car where he was going...was seen...and was later upbraided by his brother (whose own trajectory wasn't as happy as Dr. Walker's) and required to explain himself. Dr Walker goes on to tell us of the many signs of gayness that he and the Black community just...overlooked...because:


Blacks had had their fill of emasculation over the centuries of slavery; the need to not see male homosexuality in our community was strong.

I chose a comedy slap GIF, and one with two white men as its actors, to emphasize how deeply out of my sense of the essayist's carefully acquired sense of honest and effortful inclusion this passage is. I was gobsmacked by the casual assumption in that minor sentence, not in any way led up to or made the point of the piece, that gay men are not masculine and that to be gay is to be, like the slaves of yore, less than a man.

I can only assume that the espousal of this calumny isn't so; it's really out of character from all the other work in the book; but it left a sour place in my opinion of both work and man.

But the scars of disrespect for the community I live in are as nothing to the fears Dr. Walker woke in me with his horrifying brush with medical racism as his young son is having seizures...and the ignorant idiot in his small town's hospital, without drawing blood or doing anything at all except looking at two horror-struck Black parents of a child whose world needs to be fixed, now, or they're never ever going to be happy again, and says, "It could be syphilis."

SYPHILIS. Congenital, obviously, he's a child; and a Black child, obviously from a Black parent and we all know how THEY are about sex, so hey, maybe your child has it, what do you think?

What they thought was that a trip to Boston would get them the help they needed without the side-trimmings of racist bullshit. Paroxysmal Kinesigenic Dyskinesia is the diagnosis, a "neurological disorder that can trigger petit (mal) seizures when the body is suddenly thrust into motion." Move too quickly, get thrown into a seizure. Wow, there goes that whole school athletics program, and no way will you be getting swimming lessons, son...don't jump a lot...dancing? mmm...maybe not....

But a diagnosis. And with it, a way forward, a way to be your son's dad as he needs you to be, the one he turns to to fix the things that are wrong in his world. And that is a way forward. The meditation on being a father in that kind of terror-stress, of having the responsibility to make your child whole, cannot be more universal. Cannot be more particular. Cannot be better, more bravely, more fully honestly Himself, Dr. Jerald Walker; and that's why I rate this fascinating and touching and brutally honest collection of essays as high as I do, and hope he wins a National Book Award for it.