THE WORLD WELL LOST, Theodore Sturgeon's genuinely surprising story of the fate of The Loverbirds 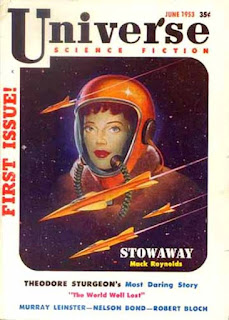 THE WORLD WELL LOST
THEODORE STURGEON
Universe Science Fiction, June 1953
Free to read a PDF at the link above

The Book Report: from Wikipedia: "In the future, two members of an alien race called the Dirbanu come to Earth. They win humanity's heart by their grace and love for each other. Earth's media has dubbed them the "Loverbirds," and almost everyone on Earth is touched by the Loverbirds' tender displays of wonder and affection.

Dirbanu heretofore had almost no contact with Earth, except for one short investigative trip in which the ambassador of Dirbanu made clear that he found Earth disgusting. However, the Dirbanu government breaks the silence with Earth in order to demand the return of the Loverbirds. Allegedly, the Loverbirds are fugitive criminals and must be extradited. Earth's government, hoping to profit by cooperation with this powerful planet, dispatches spacers Rootes and Grunty to return the Loverbirds."

But Love, as we know, must never be allowed to flourish. Read it to see what happens next.

My Review: The nine-days' idyll of the Loverbirds arriving on space-faring Terra, with their mysterious origin among people who rejected all contact with Terra long, long ago, is lyrically described by Author Sturgeon. An example:


But watch loverbirds, just for a moment, and see what happens. It's the feeling you had when you were twelve, and summer-drenched, and you kissed a girl for the very first time and knew a breathlessness that you were sure could never happen again. And indeed it never could—unless you watched loverbirds. Then you are spellbound for four quiet seconds, and suddenly your very heart twists, and incredulous tears sting and stay; and the very first move you make afterward, you make on tiptoe, and your first word is a whisper.

That's pretty much a paean to the palpable aura of Love that these two beings emit? outgas? glow with? anyway, exude somehow. Terra is enraptured! There are trideo stories made, you can order a solidograph of the Loverbirds, the usual commercialization of the ineffable takes place in this way, far distant time when Terra is among the crowded, spacefaring galaxy.

Which is one way you know this is an old, old story. The Fermi Paradox, stated in 1950 at Los Alamos National Lab by Enrico Fermi as "Where is everybody?", wasn't yet scientific let alone secular orthodoxy in thinking about alien life Out There. (And yes, pedants, Konstantin Tsiolkovsky said a similar thing in 1933, so don't bother to remind me.) But the exuberance of that universe-view is so appealing to me that I am always willing to grandfather it in.

So the Loverbirds, having created this rapturous current in Terran civilization, have to come to a bad end or there's no story, right? The Dirbanu catch wind of the Loverbirds' existence. And recognize them. With absolutely no pleasure at all. These two are wanted criminals! And since the Dirbanu are thought to be a powerful, if aloof, race and thus a people that Terrans would very much like to cozy up to, they agree to send the criminals back to face whatever. The crew selected for the trip are one of the most well-established crews in Terra's service. No problems being together in a small ship, no bad trips or unsuccessful missions; of course Rootes and Grunty will get the job done and return the Loverbirds to Dirbanu for punishment. (The issue of guilt is unimportant, apparently, as is the nature of the punishment; Terra needs new tech!) They're a finely tuned machine, these two, trustworthy in the extreme. Grunty's huge, Rootes is small; Grunty's quiet, Rootes is voluble. Perfect!

Rootes had filled the small cabin with earthy chatter about his conquests in port, detail by hairy detail, for two solid hours preceding their departure. ... Grunty had long ago noted that these recitations, for all their detail, carried the tones of thirst rather than of satiety.

Possibly the most poignant line in the whole story, but only after one has finished it, is Grunty's thought, "And what you could buy with a shekel's worth of tenderness, my prince!" which, despite its pithy, proverb-ly ring, appears to be used for the first (and so far only) time by Sturgeon. More quotations from Grunty's extensive reading float into his mind...and are understood by the hitherto-uncommunicative loverbirds. A telepathic race? Not unknown, but uncommon, and the Dirbanu having sent one Ambassador in all of Terran history (and he was simply appallingly bad-mannered to his hosts), a factor entirely to be chalked up to Chance. No one would know from the outside looking at them, after all, that their brains operate in this way....

Maleficent chance, to Grunty. He has A Secret, and he does not want his secret revealed.

Apparently Author Sturgeon had a low opinion of Terrans, and based on the attitudes of 1953, I can't blame him. Apparently he believed there would not be any improvement in Terran society's attitude of intolerance and loathing towards gay men. Apparently even going to the stars doesn't teach men that whoever and whatever a man may be, you're both still Human in a Universe so vast that your existence is insignificant, so lighten up on the petty details. And Rootes is exactly NOT the man to get that lesson, spending a considerable time expounding to Grunty how much he agrees with the Dirbanu's calling the Loverbirds criminals, and making sure his loathing for them is clear. Because they share Grunty's Big Secret:

Grunty, poor lad, is left with what I think is a super-pithy aperçu: "Why must we love where the lightning strikes, and not where we choose?"

Any answers to that question would be gratefully welcomed all over this planet.
Posted by Richard at 7:30 PM