BOYFRIEND MATERIAL, a romp of a gay-male rom-com read 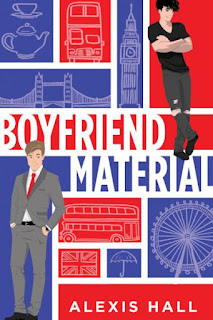 BOYFRIEND MATERIAL
ALEXIS HALL
Sourcebooks Casablanca NOTE: Link is to Amazon because using the Sourcebooks storefront is a horrible experience and I don't wish it on anyone
$9.99 Kindle edition, available now

The Publisher Says: Wanted:
One (fake) boyfriend
Practically perfect in every way

Luc O'Donnell is tangentially—and reluctantly—famous. His rock star parents split when he was young, and the father he's never met spent the next twenty years cruising in and out of rehab. Now that his dad's making a comeback, Luc's back in the public eye, and one compromising photo is enough to ruin everything.

To clean up his image, Luc has to find a nice, normal relationship...and Oliver Blackwood is as nice and normal as they come. He's a barrister, an ethical vegetarian, and he's never inspired a moment of scandal in his life. In other words: perfect boyfriend material. Unfortunately apart from being gay, single, and really, really in need of a date for a big event, Luc and Oliver have nothing in common. So they strike a deal to be publicity-friendly (fake) boyfriends until the dust has settled. Then they can go their separate ways and pretend it never happened.

But the thing about fake-dating is that it can feel a lot like real-dating. And that's when you get used to someone. Start falling for them. Don't ever want to let them go.

I RECIEVED A DRC OF THIS BOOK FROM THE PUBLISHER VIA NETGALLEY. THANK YOU.

My Review: I'm about done with 2020 and its shuddering horrors. I opened this book to get away from nastiness and grimness. It was a pretty good decision. I slept for hours after finishing it & even dreamed of these two. The pace dragged twice, once in the Cadwallader Club, once in Milton Keynes, but what a joyous rollicking ride it was getting there then getting away.

I loved laughing so hard it hurt:


There should really be a word for the feeling you get when you do a thing you don’t particularly want to do to support somebody else but then realise they didn’t actually need you and nobody would have noticed if you’d stayed home in your pyjamas eating Nutella straight from the jar.

I loved misting up because the foolish boys couldn't find their common sense with both hands:


Yes, he {texted} finally. I’m just not used to
He left that half sentence hanging for a really long time. Then: Sorry. I pressed Send too early.
Okay, he was not getting away with that. I’d like the second half please
I didn’t mean to send the first half.
Well. You have. And as five-word phrases go I’M JUST NOT USED TO is nearly as bad as WE NEED TO TALK ABOUT
Sorry. Sorry.
OLIVER!!!
I’m just not used to having something in my life that’s as important to me as my job.

and mostly I loved and treasured my time away from reality and its ugliness:


He kissed me. And it was the most Oliver kiss, his hands cupping my face gently to draw me to him, and his lips covering mine with a deliberate care that was its own kind of passion. The way you’d eat a really expensive chocolate, savouring it because you knew you might never get another. He smelled of familiarity, of homecoming, and of the night I’d spent wrapped in his arms. And he made me feel so fucking precious I wasn’t sure I could bear it.

While there was, thankfully!, no redemption for the multiple dreadful, awful people here, there was also a bit more "aren't men dumb, when they aren't awful" stuff that didn't ring true to the genre of M/M romance. Not confined to the screwed-up main characters, I mean, that's the entire joke of the book so no downs on that. The mens' fathers, for example, were insensitive boorish users. Yes, one of the mothers was truly ghastly and irredeemable too. But the arch-twit Alex, the caricature hair-trigger Welshman, the delightfully dotty old Earl, well...it felt like there was a really short supply of nuance outside the PoV couple.

But you know what? I laughed so hard it hurt more than once, and if these absurd wankers come around again I will definitely read their further fuck-ups with great hopes and expectations. This is a solid hit. Someone give it to Henry Cavill and tell him to study up on Oliver.