DISASTERAMA!, a funny, poignant memoir of coming (and coming, and coming) of age during a plague 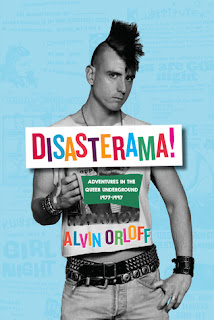 The Publisher Says: DISASTERAMA: Adventures in the Queer Underground 1977 to 1997, is the true story of Alvin Orloff who, as a shy kid from the suburbs of San Francisco, stumbled into the wild eclectic crowd of Crazy Club Kids, Punk Rock Nutters, Goofy Goofballs, Fashion Victims, Disco Dollies, Happy Hustlers, and Dizzy Twinks of post-Stonewall American queer culture of the late 1970s, only to see the “subterranean lavender twilit shadow world of the gay ghetto” ravished by AIDS in the 1980s.

In Disasterama, Orloff recalls the delirious adventures of his youth—from San Francisco to Los Angeles to New York—where insane nights, deep friendships with the creatives of the underground, and thrilling bi-coastal living led to a free-spirited life of art, manic performance, high camp antics, and exotic sexual encounters.

Orloff looks past the politics of AIDS to the people on the ground, friends of his who did not survive AIDS’ wrath—the boys in black leather jackets and cackling queens in tacky frocks—remembering them not as victims, but as people who loved life, loved fun, and who were a part of the insane jigsaw of Orloff’s friends. In Disasterama, Orloff tells their story: the true tale of how a bunch of pathologically flippant kids floundered through a deadly disaster.


I would become a writer! It made perfect sense: I'd always been socially awkward, pretentious, moody, self-loathing, judgmental, and besotted with the sound of my own voice. What else could I be?
–and–
Unlike prostitution or promiscuity, stripping was entirely public. One foot on the state would forever mark me as a disreputable character, the sort respectable people called a sleaze. On the other hand ... I didn't know any respectable people and my workday would be a mere thirty minutes long. And, I had to face it, some quirk of my psychic constitution rendered the strictures of ordinary jobs insufferable to me. Restaurant work felt like a cross between the treadmill at the gym and one of those Japanese game shows on which contestants are abused and humiliated in front of a sadistic audience. Office work was even worse, calling to mind those B movies in which some poor soul—bound and gagged, but eyes wide with terror—is slowly walled up brick-by-brick in the dungeon of some damp, rat-infested Transylvanian castle.

If this isn't raising a chuckle, Author Orloff (I Married An Earthling was an earlier title of his, which I reviewed rather grouchily twenty years ago) might not be the guide to a bygone day that you personally will warm to. I find his work pretty funny.

I'm Author Orloff's age. Despite being born within hailing distance of the place, I spent little time in San Francisco, more in Austin (a surprisingly queer place even then!) and New York, but the world we lived in as young men has utterly vanished. Many of the guys I knew are dead...many aren't...but all of us have empty slots where loved people once stood. But enough long-face!


The plague and the insurgency it fuelled were forging a previously unknown camaraderie and it was fun. Just then, fun was a political issue. For decades the media had painted gay men as a sad victims of loneliness, depression, suicide, insanity, and/or murder. The Gay = Tragic meme receded a bit during the height of '70s hedonism, but was making a strong '80s comeback with the modern twist that our inevitable bad end came from AIDS. The innocent victim gayboys might be sympathetic, but the pity they evoked felt maudlin and slightly toxic. People wanted to end their days in a party, not a puddle of tears.

What a fast-paced and nostalgic look back at a moment when being young was fun! It can't be helped that AIDS took the lives of so many. It feels like the world Orloff describes (and illustrates with candid snapshots and collected ads, posters, and the like...who the hell keeps this ephemera?!) is as distant as World War II. These days, fun seems dead and young people have to think about what we had the luxury of ignoring.

Selfishly, I'm glad I could ignore it. Responsibly, I wish I hadn't had that choice. Take the walking tour of a vanished world with a cis-white queer punk-party boy who grew up way, way too hard. Maybe not too fast, considering he's still whinnying with us.