NATIONALIST LOVE, a Polish graphic novel about QUILTBAG people...just not the ones you're thinking of 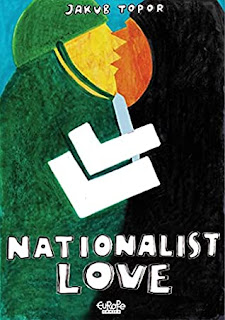 The Publisher Says: When Zapsky and Byro meet during a right-wing nationalist march, their joint escape from the police results in an unexpected and violent outburst of passion. Their initial euphoria quickly turns into doubt and fear—after all, if their buddies found out about them, the consequences would be terrible... But now that they’ve come together, will they be able to simply forget and move on with their lives? Or is it something more lasting, despite the risk it represents for both?

"Nationalist Love" is the third graphic novel by Jakub Topor, nominated for the graphic novel of the year award at the Lodz Comics Festival.

My Review: Two skinhead boys, Zapsky and Byro, meet at a hate-rally held in their Polish city. The Nationalists, our Proud Boys writ Euro, throw stuff and set fires and hurt cops. These are some revolting people. They're each stupider than the other, they got no class or brains, yet still they find each other...attractive? available? attainable maybe. Their stupid antics require them to hide from the cops...naturally they decide to do it together, since Zapsky's mother is away for a month. Hijinks ensue.

This isn't the first time I've seen these boys, just never so thoroughly reduced to their ugliest shapes and colors. As a not-especially-convinced experiencer of sequential art, this was always something I found irritating...this kind of "artwork" would get the horselaugh from so many artsy types I've known. I'd absorbed that prejudice and simply never bothered to challenge or examine it until the past few years. Now, I look at this art's clumsiness and its garishness and think...well, how better to narrate this story?

Whaddaya expect, anyway, in a world centered on two losers without a shred of class or decency between them? They are always gonna have to hide abnormal, sick sexual proclivities from the world their undereducated, credulous, angry, and powerless class lives in. Funnily enough, like so many who live in that hate-defined and -bounded world, it's also the one they resent. But Zapsky and Byro got lucky, found each other....found love...which is the most dangerous thing of all. Zapsky definitely feels this, after a brief and deeply unsettling period of being truly happy with Byro, and under pressure to prove he's not a fag to his co-workers, he sends a break-up text that callously dismisses Byro.

Zapsky's Mammele, escaping her loser son's ubiquity and her own pointless existence, is at a beach resort-cum-health spa. And guess what? She meets A Man too! (Called Manfred. No lie.) The sheer awfulness of the art, as in the ugliness of the people and the garishness of the colors, goes so well with this horrible tale of numerous disgusting creeps that it's almost eerie. And that's when I felt myself really giving up, shedding the weight of, that habit of contempt. It isn't pretty! But who said art needs to be pretty? I like Jackson Pollock and Agnes Martin, for gods' sweet sake. I'm not one of those Impressionism-über-Alles sofa-matching-art people!

Or maybe I am...and hide it from myself by liking things that made my mother cringe? That certainly includes comic books...I've been so snobby about them for so long that it feels fake to say, "there is no other way this story could've been told, and it very much needed to be told," but it's just the truth.

Chapter 3 is called "Spoiled Rich Kids"...seems to be a pattern among Polish émigré writers. Like Jedrowski in Swimming in the Dark, Topor gets a character (Byro Bad-skin here) among the wealthy who are privileged to consume and exist as they like. Then he lets him sink or swim...sink in this case. Byro's rebounding from his breakup text, and searches the Internet for gay clubs...he decides he's going to fix himself up, be less Nationalist looking, by dressing better and hiding his skinhead under his loser father's long-unused toupée. The club scene scares him, he doesn't know the culture and is about to get himself into serious trouble but is rescued by one of the rich kids. They decide to keep him when leaving the club becomes a good idea...he almost loses his cool when a "darkie" (an Arab guy called Jamal) is in the house party, too. He's eventually, and inevitably, outed as a Nationalist; but not until after kissing a straight guy at the party. The violence the posers inflict on Byro is pretty mild...more about humiliating him for not being like them. And that, despite the fact he doesn't *want* to be like them, is the worst rejection he suffers. (Not that he is recovered from being rejected by Zapsky, please understand. Just trying to figure out how to move on.)

Mammele gets lucky with Manfred. That scene's just grisly. Even Byro's parents decide to fool around (more grisly still). Byro's Dadzio figures out the kid's got his wig. That should be fun! I thought, watching him explain what the hell he was doing with the damn thing....

Chapter 4 is "Zapsky Looks for a Girlfriend"...the co-workers' plan to get Zapsky laid results in him finding one. Because he's never been in any relationship at all except the brief honeymoon with Byro, he ignores the red flags of an abusive, angry, selfish woman looking for something in exchange for the sex she doles out to him. In his months-long journey through this hell, Zapsky confronts low self-esteem, and his work pals do a lot to support him and care for him. They are crude but actually touchingly kind. Since we focus on Zapsky, we never learn anything more about what happened after Byro's night out...disappointingly...or about Mammele's reactions to the girl Zapsky gets with.

But long story short: Girl gets dumped. Zapsky gets lonely. One rainy day who does he see under a bus shelter but...BYRO!! It's a loving reunion, the bond of real love between them reasserts itself, and they, well, do what young guys do when under the heady influence of reciprocal attraction and genuine connection. They fool around.

...and there's a PoS from their earlier Nationalist lives filming their reunion.

Naturally, the evidence gets shown to the wrong people. All the old gang, I mean this literally, are on the hunt for Zapsky. They find him.

Things end as they so often do.

They are normalizations of hate, and soft volleys preparing the way for violence.

I downloaded this graphic novel from Europe Comics, an outfit with whom I am unfamiliar...how shocking...so, if you're in the same boat, here's their mission statement from NetGalley:


Europe Comics is a joint digital initiative run by 13 European comics industry players from 8 European countries. Its main purpose is the creation of a pan-European catalog of award-winning graphic novels from across the continent, published digitally in English and available through major retailers and library networks. Europe Comics also works towards the promotion of European authors and the creation of a European comics online directory, meant for both comics readers and professionals.

Well...so this Polish creator found his way to this American oldster via a social system intermediated by several levels of technology that are under a lot of pressure all the time to justify its worst users' behaviors. This is an example of positive social and personal results from being massively online. Say hallelujah and bring the jubilee.