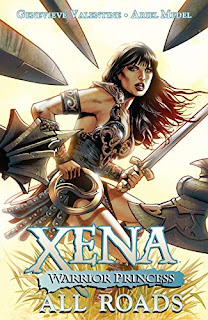 The Publisher Says: To the thrill of rabid fans the world over, television's Xena: Warrior Princess is back for swashbuckling new adventures!

After the Twilight of the Gods, the world is precariously uncertain, and Xena and Gabrielle have been missing for twenty-five years. The power of Rome is growing; Caesar is determined to conquer by lies what he can't conquer by force, and the people at its edges know what's coming.

Our heroines return to stop him before they have to wage war against a man they once called a friend... but along the way, Xena will have to confront her past against a rogue band of women warriors, and Gabrielle, whose secret visions are becoming prophecy, will have to protect her partner at any cost.

My Review: I'm not a native comic-book reader. It wasn't A Thing, I just wasn't offered them by anyone I knew until (apparently) too late in my development of story-acquiring techniques. In my ongoing quest to remain mentally flexible, though, I determinedly seek out graphic novels to challenge my preconceived notion that they're somehow lesser-than and unequal to text story presentations.

Xena, OTOH, has never once since she showed up in The Adventures of Iolaus and that other jackanapes I don't like, failed to amuse, entertain, delight, or just generally please me. So what could be better than a freebie look at a Xena story? No risk, decent possibility of reward.

Rewarded. I can't reproduce the artwork from this lovely story, sorry, but good gawd is it lush and smooth and expertly emotion-tweaking. It's clearly meant for adults, and by adults I mean mental ones if not necessarily chronological ones.

Everything about the artwork as relates to the story made all my hairs stand up. I kept going back a few pages to see where *this* little detail turned into that pretty focus. I love that paintings of Hieronymus Bosch for this same effect on my attention, though I'm no way no how comparing the capable artists here to The Great Master Bosch. Don't, fellow comic-book snobs, make the mistake of thinking you're in for a lesser storytelling experience. Different, yes; lesser, no. 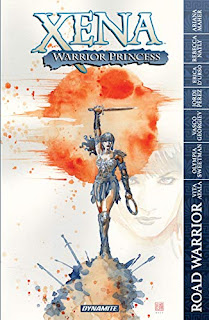 The Publisher Says: In a time of ancient gods, warlords and kings...a land in turmoil called out for a hero! She was XENA, a mighty princess forged in the heat of battle! In this all-new series, writer VITA AYALA (Black Panther, Shuri, Wonder Woman, The Wilds) and artist OLYMPIA SWEETMAN throw Xena and her companion Gabrielle headfirst into a mysterious adventure. Can Xena discover the secrets of a village full of super-strong children, before jealous and petty GODS get involved?

My Review: The very best thing about this storyline is that Xena and Gabrielle are very, very firmly A Couple. There is not hinting, or hairpin dropping, or waffling: The ladies are together and they are not making any bones about it. As it goddamned well always should have been.

There is a risk in doing something unfamiliar and not entirely to one's taste twice in a row. That is what happened here. It's not just the artists weren't quite as aesthetically to my personal taste as the ones above...it was that the illustrations were uneven in quality.

I'm still very, very impressed that the storytelling is so well mated to the ideas and images. I'm just not quite as blown away. Still, I remain open to the pleasures this visual storytelling medium has to offer a very textual person. That's quite a thing for an artform to be able to do.