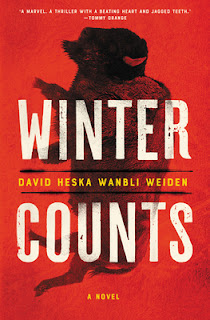 WINNER OF THE BEST FIRST NOVEL ANTHONY AWARD FOR 2021! Virtual Bouchercon award ceremonies linked to at the above.

WINNER OF THE BEST INDIGENOUS WRITER at the 2021 High Plains Book Awards.

The Publisher Says: A groundbreaking thriller about a vigilante on a Native American reservation who embarks on a dangerous mission to track down the source of a heroin influx.

Virgil Wounded Horse is the local enforcer on the Rosebud Indian Reservation in South Dakota. When justice is denied by the American legal system or the tribal council, Virgil is hired to deliver his own punishment, the kind that’s hard to forget. But when heroin makes its way into the reservation and finds Virgil’s nephew, his vigilantism suddenly becomes personal. He enlists the help of his ex-girlfriend and sets out to learn where the drugs are coming from, and how to make them stop.

They follow a lead to Denver and find that drug cartels are rapidly expanding and forming new and terrifying alliances. And back on the reservation, a new tribal council initiative raises uncomfortable questions about money and power. As Virgil starts to link the pieces together, he must face his own demons and reclaim his Native identity. He realizes that being a Native American in the twenty-first century comes at an incredible cost.

My Review: This is a Brulé Lakota Winter Count: 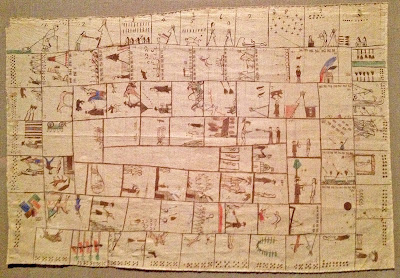 This cultural tradition, extremely briefly summarized in a Wikipedia article, organizes this novel’s ideas. Virgil Wounded Horse, our aptly and prophetically named vigilante-cum-enforcer hero in this thriller, touches on this fascinating piece of (half) his ancestry’s sense of time and place often enough to make the title of the book emerge organically in the reader’s mind. Virgil muses at one point, “Winter counts were the calendar system used by the Lakota, but they weren't like modern ones. I'd loved the little pictures in the calendars, each image showing the most significant event from the past year.” He muses again, at a later point, “Winter counts. This was the winter of my sorrow, one I had tried to elude but which had come for me with a terrible cruelty.” I think both are ideas of how he, his world, and his sense of self, are in motion at all times. It makes his entire life spent in action make sense…he’s not a Lakota insider, like ex-girlfriend Marie Short Bear, whose ancestry is flawlessly pureblood and perfectly in tune with the power structure within the Rosebud Reservation. He’s not an insider in the white world, either, being a mixed-race outcast from its racist system. It’s been a blessing in that any curse can be turned into an advantage if you’re looking for a way to do it. He’s got a place enforcing justice outside white and Native American legal systems, as required.

What this means is that the character is perfect for a thriller that needs telling to get people to care about the problems heaped on Outsiders, Othered people, by all systems of government. The tribal justice system (arguably distorted by its necessary accommodation to white codes) as much as any other. Virgil is outside, and that is the perfect place to be when the upper echelon needs something done that won’t “look good.” The value of face, of taking things at face value, is something white people with our media obsession have raised to virtual apotheosis; it’s far from untrue of other cultures, however. Marie Little Bear’s tribal leadership position means he can’t directly do the effective thing against the drug cartels hooking Native kids on heroin, with the well-known tragic consequences.

Had the plague not touched Virgil’s nephew, hard, he wouldn’t have agreed to take on the violent and greedy and frankly evil people. But when it’s family, things look different, don’t they. What happens on the reservation has its roots in the not-distant city of Denver. Marie and Virgil set out to confront the ills of their corner of the world by going outside that corner, by bearding the lion in his den, and they are not surprisingly at some disadvantages there. It is as revealing to consider their troubles and issues within the white world of Denver as to examine the world of the reservation in promotion, tolerance, and perpetuation of toxic social maladjustment.

I’m impressed by the way this thriller uses its author’s straddled worlds…he’s Lakota and teaches Native American Studies at the Metropolitan State College of Denver, so clearly he’s quite adept at code-switching…as a full and integrated world for Virgil Wounded Horse. We’re not expected to see Virgil as a man out of place in two worlds, we’re expected to see a man discovering his place in his own world. It is a fine distinction, but an important one. Virgil is an outsider in each of those large, obvious social constructs. He is making his own world, one in which he is the norm, as in the end that is what we all must do to “fit in.” Where the world doesn’t have a place for you, make one.