Most really serious mystery readers are familiar with Georges Simenon’s Inspector Maigret. The series ran for 75 books, after all, and from my experience with it you can pick up any one of them and go from there, with no loss of understanding. Mysteries are the traditional beach reads, and with Memorial Day fast approaching we’re all packing, packing, packing for that first taste of summer somewhere else.

But what about the ride, the flight, the train trip to Paradise? Beach books are already in the suitcase, and are generally too fat to be comfortable short-to-medium travel companions. Ereaders increase your options, of course, and this is the moment of escape! Start something vacation-y, something new, something really fresh.

Simenon was a really prolific writer--those 75 Maigret novels alone would guarantee that--of books in many genres. Among the least remembered of his output are his noir-tinged romans durs, or strong novels. The books are tight, compact, laser focused on an event that guarantees to blow the assumptions, the positions, even the lives of the characters sky-western crooked. There the reader sits, ordinarily with a dazed or even shocked expression, as the story unfolds in all its violent, sexy glory.

There was a lot of dismissive rhetoric around Simenon in critical circles largely because of his amazing rate of word production. Thankfully, all those critics are dead and New York Review Books has the good taste to reprint many of these short, intense novels. They’re great choices for the trip to summer’s pleasures, whether tree book or ebook. 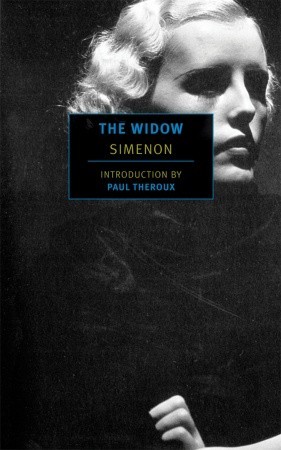 The Widow, first published in 1942 during the German Occupation, was overshadowed by Albert Camus’ near-simultaneous publication of The Stranger. A young drifter, newly released from prison, moves in with a middle-aged widow for lack in either of them of a better idea. The farm that the widow inhabits is coveted by all and sundry, and the young drifter’s murderous past is held up to the widow as reason enough she should leave, move to town, go somewhere that others can see she doesn’t do dangerous and foolish things. Their familial worries are justified by the relationship quickly turning physical, and the inevitable young rival, her niece no less, for the young hired hand’s attention sets in motion a train of jealousy, lust, and rage that cracks open an entire village’s life. In 176 pages. Masterful.
$12.95 trade paper 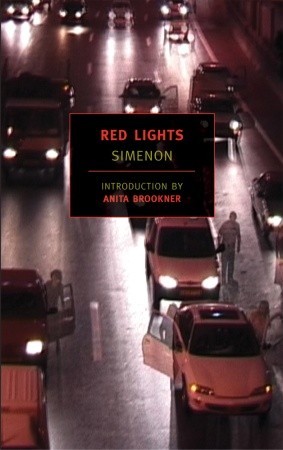 Red Lights, first published in 1953 as American post-war consumer culture was really picking up speed. Simenon was inspired to write this indictment of the anomie inherent in an uncentered world. Steve is driving his wife Nancy from broiling New York City to much cooler Maine, where they will pick up their children from camp. The roads of 1953 were nothing like as direct as today’s (albeit overcrowded) interstates. The frustrations of the drive make Steve’s growing alcoholism act up, and Nancy’s angry contempt for Steve boil over to the point she walks away from the car, from Steve, from her life. When Steve gets them back on the road to Maine, he’s accompanied by Sid, an escaped convict. Steve expounds on his feelings about Nancy, forgetting that a criminal isn’t a good choice of confidant. A price must be paid for being a fool, and it only takes Simenon 160 pages to make Steve, Nancy, and probably Sid wish they’d never met. Looking away isn’t an option. But you’ll never be more grateful to be you than when Red Lights is over.
$14.00 trade paper 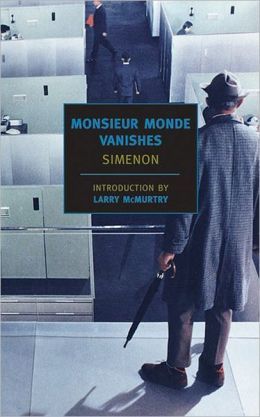 Monsieur Monde Vanishes was first published in 1945. The title is the story: An upper middle class man wakes one morning as usual, dresses, breakfasts, and is never seen again by his family. Word of him seeps back to Paris. He is debauching himself in the company of the lowest rank of people he can find, drinking, whoring, and giving himself the “good time” others have in earlier years. M Monde has been both sober and sober-sided too long, his obsession with venery--in French the phrase for this is nostalgie de la boue, or longing for the mud--must be released, rewarded, submerged in. The 192 pages of this book are loaded with a tension and a frustration that is gripping. And exhausting. And oddly rewarding, considering we’re watching someone a lot like us set out to rip his public face up.
$14.00 trade paper 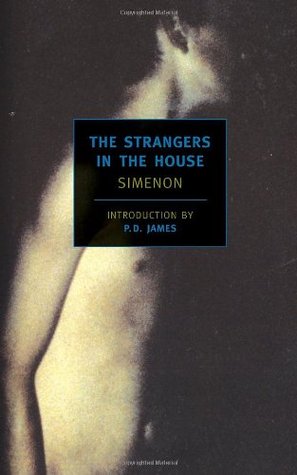 The Strangers in the House, published in 1940, peculiarly predicts the development and tragedy of affluenza, or possibly shows the disorder’s constant appearance in history. Hector’s wife abandoned him eighteen years ago for another man. She left behind the couple’s only child, an infant daughter. It is the daughter, Nicole, who provides the strangers to inhabit the decaying manor that her sot of a father, mired in self-pitying self-inflicted misery, has paid no attention to. Apart from the study where he drinks, of course. His completely narcissistic existence is only and at last interrupted by the muffled sound of a gunshot somewhere inside. The events that follow in these 194 pages both startled and repelled me; the novel as a whole feels depressingly au courant.
$14.95 trade paper 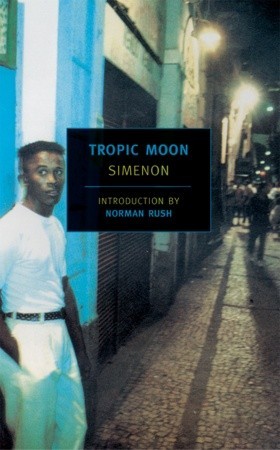 Tropic Moon, first published in 1933, is one of Simenon’s trademark deep psychological novels. Joseph, a young, aimless well-to-do man decides he needs to tour France’s African colonies as a way to escape the anomie of being rich and privileged. His uncle, powerful and influential, gives him an introductory letter to the manager of his timber concession in Gabon. He also warns Joseph to beware of getting involved in any kind of partnership. Fatefully, Joseph meets Adèle, the native wife of a hotel owner.

Love will find a way to destroy you, as many have discovered, when you’re not ready for its demands. Joseph sinks into the colonial white “elite” crowd, indulging in their various revolting practices while sinking deep into an obsessive love for married, manipulative Adèle. When lethal crimes begin to happen, Joseph slips down deeper into the world’s most horrible criminal system: colonialism. His escape will never happen, we’re sure, and it seems less and less desirable as his character changes. Another book that makes vacation all the sweeter by comparison.
$12.95 trade paper

As you’re finishing your two hours (or more) of travel, any one of these novels should be finishing or just finished. Each has its own strange pleasures, and could only come from the pen of Belgium’s best-loved literary export. Don’t let the fact that they’re translated put you off. You’ll barely notice at first what will be transparent to you by journey’s end.