THE OTHER SIDE OF HOPE by R.F. Dunham, a reverse/mirror version of our modern world 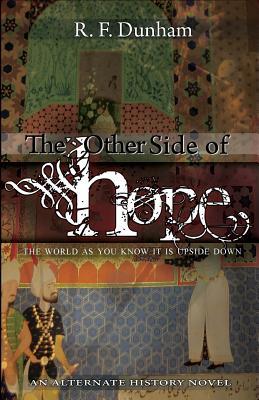 THE OTHER SIDE OF HOPE
R.F. DUNHAM
Kindle Edition
99&cents, available now

The Publisher Says: In 732 A.D., the Frankish and Burgundian forces led by Charles Martel defeated an army of the Umayyad Caliphate led by Abdul Rahman Al Ghafiqi and halted the Muslim advance into Christian Europe. At least, that's what happened in the world as you know it. Step into the world of The Other Side of Hope, where the world as you know it is turned on its head.

In this world, Martel was defeated and the Caliphate continued to spread across Europe until the entire continent was under its control. Christianity was eventually forced to flee west to a distant and dangerous new land. Without the support of European powers, these settlers found only conflict, poverty, and hardship. In the modern day, this world remains divided. The wealthy Muslim East and the poverty-stricken Christian West are constantly at odds. A single spark is all it takes to ignite fresh conflict and the cycle seems never-ending.

Ethan Lewis is a proud young Christian living in Tioga, the poorest district of the developing nation Lachlond. All he wants is to marry his fiancee and provide for his mother and younger siblings. The only problem is that his mother insists he can't do both. Not until his sister is married off and out of the house. Hamid Damir is an ambitious Muslim businessman from Istanbul, the financial center of the world. He's trying to build a prosperous and happy future for his family. But, after five years of marriage, his wife is beginning to realize that she has different ideas about what that future should look like.

Everything changes for both young men when the Brotherhood of the Sword, a Christian terrorist organization, launches a devastating attack on Istanbul. As the wrath of Turkey descends on Lachlond, Hamid and Ethan are pulled into a war that sets them on a collision course with the other side and may cost them everything. Will they find hope for a brighter future or be lost in the despair of intractable conflict?

My Review: As an alternative history lover, I was very excited when I was offered this title for review. A Muslim-dominated world and European Christians forced to flee ever westward? Yes, please!

As I read along, I found myself ticking off the factual basis for the fictional world's current story. As the checkmarks multiplied, I found I was losing enthusiasm for the read itself. (Given the nature of the plot, anything specific I say will be a spoiler.) Add into that some very pet-peevy copy-editing errors (eg, currier for courier in all but one reference) and I was becoming disheartened.

What saved this read for me was the ending. Considering how often I whinge about endings that fail or disappoint, that's pretty astounding. A very common first-novelist flub is to tie up the end of the story with a pretty little bow on its bottom, however incongruous that might be given what's come before. Dunham avoids this trap handily. There are consequences, dark and painful ones, for the actions the characters take. There are no winners, and all the way around, the book ends on a hopeful note that manages not to feel forced or fake or tacked on.

It's a very good bargain in the Kindle edition, as it will most certainly keep you tapping left to see who will "get it" (not in the Peckinpah sense!) next. This writer has promise, and with time and experience, will be a must-read one day soon.
Posted by Richard at 6:30 AM