IF OUR WEALTH IS CRIMINAL THEN LET'S LIVE WITH THE CRIMINAL JOY OF PIRATES: Small book with *really* long title 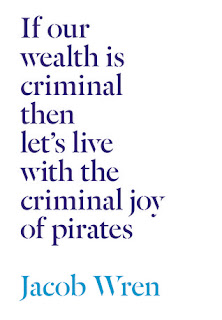 IF OUR WEALTH IS CRIMINAL THEN LET'S LIVE WITH THE CRIMINAL JOY OF PIRATES
JACOB WREN
Book*hug/A Boondoggle Book
$10.00 trade paper, available now

The Publisher Says: From multidisciplinary artist and author Jacob Wren comes a small book of big ideas. Originally produced as a 'Boondoggle Book' limited edition specifically for the first Authors for Indies Day in Toronto, this small and delightful book is a must-have for fans of the author of POLYAMOROUS LOVE SONG (named one of the top 100 books of 2014 by The Globe and Mail). IF OUR WEALTH IS CRIMINAL THEN LET'S LIVE WITH THE CRIMINAL JOY OF PIRATES collects two short stories and an essay by Jacob Wren. In the first story, 'The Infiltrator, ' certain ongoing, rarely mentioned, difficulties for the activist Left are explored with unlikely candour. In 'Four Letters from an Ongoing Series, ' the postal service becomes an unwitting accomplice to the gatekeepers of potential culture. Finally, in the essay 'Like a Priest Who Has Lost Faith, ' questions of art and emptiness shift focus in relation to the agency that at all times surrounds us.

My Review: As always with story collections, I'll offer specific comments on the stories themselves and finish up with some wise (or wise-ass) summing up. Without further ado, I deploy the Bryce Method's time-tested techniques:

The Infiltrator is either the shortest récit I've ever seen or it's a short story with the same intimate effect as a récit because we never get out of our nameless narrator's head. It's more effective at greater length, in my opinion, but there is nothing wrong with the story's story. It's fascinating to look at an agent provocateur's strange mental state. The money? The cause? I can't imagine. The narrator's account of his actions are without emotional responses; the narrator records the emotions of the people she or he is manipulating without attempting to respond to them personally. Curiously, I found this more telling of the narrator's character than any more noisy declaration could have. This is an amoral person. This is the bad seed your mother warned you about. 4 stars

Four Letters from an Ongoing Series details the dreary, pointless existence (it's not in any way describable as a life) of an aspiring writer. From information within the frame of the story, he sounds like a white, middling-aged bore who has never escaped the analysis paralysis that a liberal arts education can put some people in:


I hate it when I feel like a man. It is probably even worse when I don't, since those are times when I am coasting through territory where my privilege is even more invisible to me than usual.

Self awareness? Or narcissistic navel-gazing? Both in some degree?

His manuscript, one assumes the same one each time, is rejected by four presses. Each letter he receives is more explicit about why they aren't publishing it. Midway through this painful process of absorbing so much rejection, he ruminates on the very business he's trying to enter:


Will literature last forever or is it practically already a thing of the past? And how do we even define literature, since without some definition it is barely possible to judge the field's relative health or disrepair. Are my overly refined tastes--predelictions and preferences I've spent most of a lifetime overly refining--the most useful criteria or do they pertain only to my personal idiosyncrasies? Would it be better to have something more generalized, a canon most might agree upon, or would this very canon simply be a dampening force, pushing down the lid, creating conventions through consensus both more consensual and more conventional?

If he writes the way he thinks, no wonder his manuscript bounces back to him so often. Yeah, all of that blahblahblah is true and valid. But outside an academic journal or a classroom this is some seriously dreary verbiage.

The last rejection letter is a rant of epic proportions, ordering the narrator to go out and live, to get his head out of his butt and maybe then he'd have something other than his pathetic life to write about. However good this order is, what a difference it might have made...human nature wins. 3.5 stars

Like a Priest Who Has Lost Faith: Notes on art, meaning, emptiness and spirituality really doesn't need more explanation than the instruction "read that title again and reflect carefully on how it can relate to the subtitle" and this paragraph from the text:


I wonder if the framework within which most contemporary art attempts to generate meaning is analogous to the 'never been modern' framework that {Bruno} Latour criticizes {in his major work, We Have Never Been Modern}. Art is a world that separates, continuously playing the divisions against one another in ways that are often contradictory: good art against bad art, art against everything else, political art against commerce, etc. The gallery is the place for art, but it is also a way of removing art from the rest of life.

Has Wren lost faith in the idea of modernity? The art exhibition that elicited this essay from him was called 'Animism,' a group of works in multiple media by artist Anselm Francke. Wren tells us he didn't actually see the exhibition, only read the catalogue; how amazing must this show have been to make a very intelligent man dig so deeply into his psyche and gift us with this revealing, delicious meditation on humanity and our endless search for meaning.

I read this book, slim but deep, in an hour of happy immersion. It's been my introduction to Jacob Wren, and to BookThug's very, very interesting publishing program. Apart from two pet peeves (stationAry instead of stationEry; it's instead of its), this is a tight and involving package of words. It's going to be even more fun for me to read Wren's novels now. I am looking forward to it, and I suspect many other readers will be right there with me. 5 stars