VERTIGO by Joanna Walsh, a rare, perfect view inside another being's head 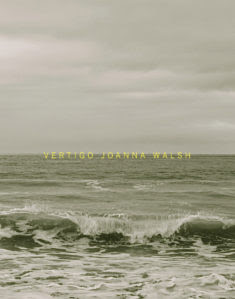 The Publisher Says: Walsh’s penetrating short story collection evokes the titular feeling of dizziness. “I sense no anchorage,” the narrator says in the title story, “I will pitch forward, outward and upward.” It’s a statement true of both the writing and the women in it; all share a detached tone, as if speaking from the end of a tunnel, and what one character describes as “uncontrol,” lives lived in language more than action. This continuity of tone often makes it difficult to tell where one narrative drops off and another begins, as the stories are linked loosely together in flashes of syntax, which read like poetry and sometimes retreat into italicized, third-person meditations. Any navigational difficulties are worthwhile, as Walsh is an inventive, honest writer. In her world, objects may be closer and far more intricate than they appear; these stories offer a compelling pitch into the inner life.

My Review: These fourteen linked microfictions are the only way I've ever found directly inside a woman's head. I know feminists who claim women and men can't *really* understand each other--was recently snipped from the life of a proponent of this theory--but I suspect Joanna Walsh would disagree, as she is a feminist who has written the kind of récit that I just treasure when I find. It is very much needed in this polarized world. An eloquent voice breathing thoughts directly into the noösphere, allowing them their own life and retaining their unique identity because of that freedom. Probably does more for the small amount of understanding there is in the world by this simple, impossibly difficult act.

As always, I'll take you story by story using quotes and trying to catch some shadow of my feelings for each story. My online friend Bryce taught me this way of reviewing collections, so I call it "the Bryce Method" in his honor.

Fin de Collection leads with a strong series of crises: an Englishwoman in Paris, perhaps to buy a red dress in celebration of leaving her husband. As I'd expect, the decision and experience lead to, well, a good hard inventory:


There is something about my face in the mirrors that catch it. Even at a distance it will never be right again, not even to a casual glance. Beauty: it's the upkeep that costs, that's what Balzac said, not the initial investment.

It was here that I knew I could trust Walsh, that I was in good hands.

I tagged this quote "worst date ever" and "just shoot him already". I have never, in all my life, thought so deeply about oysters while on a date. Poor woman! What a bore.

Vertigo is a return through time to family vacations of yore, a seeming moment of happiness in what was starting to feel like a doom-laden life:


We sit in the ruin, each reading a book, or three of us read out of four. Three different voices speak to us. We have taught the children to read again this week. Here, where there is no voice, apart from ours, they are desperate for any other. They will even sing to themselves, sometimes. The boy whistles. He makes his voice croak. He sings the same thing again, but breathing in. A bird echoes the first notes of Vivaldi.

But happiness is, for all we are taught to and desperately want to believe, internal and a matter of self-discipline:


The third person. There was no sign of this happiness on the outside, she knew. She was bored by this happiness that seemed out of place, impatient to get rid of it. The feeling was less pleasurable than she had imagined it might have been, less well-defined, and when she felt along its strings she found it was not easily traced or attached to the objects she thought it might have been attached to. Perhaps it was not attached to anything at all.

Losing control of the wanderings of her mind, our narratrix returns to the single solid truth that she knows: She is not happy with her life. And her thoughts are drawn there by the lodestone of dissatisfaction.

Young Mothers loses the sense of self that we spend decades building in the simple fact of motherhood. Walsh makes the point that we're born of our children, "Connor's mum or Casey's mum but never Juliet, or Nell, or Amanda," that everything inside mum is focused on Connor or Casey. And then, being Joanna, Walsh throws in this single-sentence paragraph that makes a simple ordinary observation much more profound and not a little scary:


Then we had to remember how to play.

That had to hurt, writing that sentence with its many levels.

The Children's Ward needs no more explanation than the title and this quote:


How long before the parts of my body realized, independently, that something was wrong and arrived, severally, at panic? Panic is a still thing. I have felt it before: each limb nerve organ coming into extreme alert unrelated to any other, ready for action, but who knows what action, as there is no action that could help here.

Online boredom, guilt, ennui...how long can it take to reach a decision to terminate the non-functional life we all live with someone, somewhere in our past or present?

Claustrophobia is that hideous moment of not-belonging in a place and with a family we once knew and valued:


There are so many of you, and you are still just the way I thought I'd grow up, with all that was enviably grown-up about you: the lace tops with modesty inserts, and the spangles as if for nights out, the stiff hair, the cardigans grown over with a fungus of secondary sexual characteristics--bristling with embroidery and drooping with labial frills.


The washing up liquid smells of sweeties. It tells me that it is ginger and peach. It smells of something we should still be eating. This seems wrong: it should smell of something after, whatever it is that comes after.

What comes after the realization that you don't fit? I've never known. Maybe bury yourself:


There is no bottom to the cake. I'm digging through the kind of soil that supports rhododendrons: it's that dark.

Have a vague hope that somehow something beautiful will come from poisonous sweet love.

The Big Black Snake is, I'm sorry to say, completely inscrutable to me. Whatever collective thought process Walsh wants to make a point about (I think) went sailing over my head, an arrow shot at a different target.

And After... ruminates on ideal futures/pasts/alternatives in the wake of a loss or an ending. Based on tone, I'd slot this in chronological step with "The Children's Ward." Here's why:


Let there be children and old people but few whose occupation is neither hope nor memory. Let there have been immigration at some point: enough to fill the convenience stores, the foreign restaurants, but let it be forgotten. Let the children be all in school, a breath held in, released at 3 o'clock across the park. Let the town's rhythm be unquestioned. Let me be single: no children, no family. Let me not fit in.

That bleak grey view of a colorful world feels exactly like grief over losing a child.

Half the World Over a peripatetic period in the divorced woman's life, New York City to Paris, leaves her surprised at anyone's vigor and adventurous spirit:


I am tired and drunk and still hungry. He is full of steak and Coca-Cola and, presumably, energy: enough energy to cross the road and walk up the steps inside the tower of the cathedral, which I have never entered.

And miles to go before I sleep....

Summer Story measures the depth of self-loathing involved in being someone's back-up and realizing you'll never have any other place to be: "Finally I saw him last night at a party and he ignored me until at last he took me aside and said he was sort of seeing someone else, and I said, s'okay and he shrugged and said, that's how it goes, and I shrugged and said that's how it goes." Many a summer has been wasted by many a person over just such a non-event that manages to swallow one's entire self-esteem.

New Year's Day you *know* ex-sex is just not a good idea, but I don't know anyone who hasn't, at some moment, done the tangle-foot tango with the previous incumbent. Why?


You made yourself small on top of me, and I held myself still while you told me about the lovers you'd had while we were together. I held myself carefully because if I showed any reaction you would stop telling me. And then I would know no more than before.

As we dance to the masochism tango, I can hear Tom Lehrer singing his silly parody clear as day.


The bus stops and out get the sort of people who travel by bus between cities: students, old people--mainly women--and the middle-aged who cannot afford the train and who have never grown old enough to drive. Out we get, and away we go, the young, the old, and the failed girls.

Drowning a swim, actual or metaphorical, across the water: "How have I lived those times you left? In abeyance. I thought it would be freedom, without you: it is not." Is it wise to ask this sort of question mid-swim? I'm leaning towards a no on that one.


Despite everything, we are good people, who can hardly live in this world that continues almost entirely at our expense. The best thing is to keep on moving arms and legs, and watch the waves, almost as though moving forward. In this way, despair turns quickly over to happiness, and back to despair again. And, if you reach the beach, walk back across it like everything is fine, toward your family who would not like to see the abyss you have just swum over.

I am left now, at the end of my voyeuristic time in a woman's head, no wiser than I was before about the essential question of the possibility of men and women understanding each other. I am heartened to learn that I have a companion in cluelessness. I would encourage all of you to read this slender and superb and revealing collection. Never was that word better applied to any book: This is a collection, Joanna Walsh and her narratrix are collections, I think we're all of us collections of all we touch. Add this faultless and fearless narrative to the collection that's you.
Posted by Richard at 6:00 AM