FRA KEELER, a novel to be savored slowly and completely 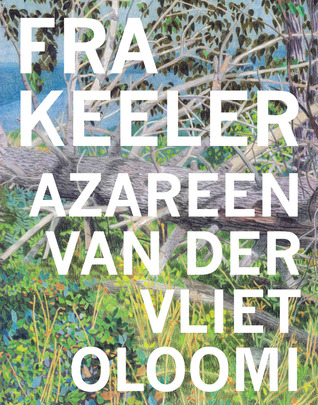 The Publisher Says: Fiction. A man purchases a house, the house of Fra Keeler, moves in, and begins investigating the circumstances of the latter's death. Yet the investigation quickly turns inward, and the reality it seeks to unravel seems only to grow more strange, as the narrator pursues not leads but lines of thought, most often to hideous conclusions.
BLURBS: "Obsessive. Surreal. Darkly comic. Chilling."--Robert Coover (!!!!!)
"Obsessive/delightful, FRA KEELER subtly elaborates on life's details, its ordinary lunacies. Azareen Van der Vliet Oloomi's observations are droll and often hilarious. Her novel's incidents pile up and on, tilting and shifting under the weight of language's bizarre disturbances. FRA KEELER is wonderfully imaginative, the work of a terrific young writer."--Lynne Tillman
"Azareen Van der Vliet Oloomi is the descendent of writers as brilliant and disparate as Max Frisch, Alain Robbe-Grillet and Per Petterson. FRA KEELER is a compelling and humorously associative meditation on how 'one lives against one's dying, ' and how that living will be in contra-distinction to all that explains that death on paper after its fact. Would that more book groups read books of this complexity and intelligence; discussion would reach on into the wee hours!"--Michelle Latiolais
"In FRA KEELER a mind churns on itself, while reality--if it is reality--comes rushing at it with a strange stutter, everything a bit lost, a bit off, and ready to be ground up further by the uncertain perception of the narrator. This is a book by turns funny and strange, but always entertaining."--Brian Evenson

My Review: You will never see an endcap at your local Buns and Nubile featuring, or even including, this weird little bagatelle. It won't be piled in pyramids at the Costco. I'd even be surprised if it was among the Staff Picks at BookPeople, Austin's excellent indie megastore.

It's too weird to be a commercial force. It's a short work, so it's not likely to be used by the hoity-toity to display their Good Taste and Erudition. (Cloud Atlas, 1Q84, I'm lookin' at you.) So who will buy and read this book?

Beats me all hollow, and I suspect the reason it was published by small-but-mighty Dorothy, a publishing project, is right there. Who's the audience for this piece? Me? I got it from one of my rich county's libraries. (I am consistently astounded and delighted by the sheer variety and quantity of oddball stuff at least ONE library in the county system will buy. Often two or three. It's a pleasure to hit the catalog and request a weirdo book like this one, and three days later go and fetch it.) I don't know if I'd have the courage to pick it up if I hadn't read some reviews, if it came to my wallet opening.

But back to this weird little item. It's an interesting way to tell a mystery story via the stream of consciousness of a fractured identity apparently having occasional psychotic breaks. The mailman's hand turns into a lobster, the previous owner of a home has a magically shifting death certificate from two widely separated countries in Europe where it would seem we are not, the dust on the skylight comes in for some heavy narrative scrutiny....

Doesn't that sound like a corking way to spend an afternoon?

Strangely enough it is. Van der Vliet Oloomi—now it's time for me to confess that I got this book at all because the author's name makes me laugh until my sides hurt, and I love saying it out loud to unsuspecting housies, the dog, the librarian even and I go out of my way to avoid talking to the sourpusses at my library—is a young Iranian-American MFA-havin' writer whose sinuous sentences are a pleasure to slither alongside, and a more surprising and unexpected compliment I have yet to give.

ROBERT COOVER yes that's right ROBERT COOVER, he who created the uberbrilliant book The Public Burning which if you haven't read don't confess your turpitude to me just go fix it by reading it, praises the book! A writer I had never heard of compares Van der Vliet Oloomi (heh) to Max Frisch...I can't even pronounce “Latiolais” and had never heard of her either, so I ordered up her collection of short fiction Widow: Stories and must say that I owe Van der Vliet Oloomi a huge debt of gratitude for introducing me to this terrific talent...he of the awful, misogynistic novel Montauk and the impenetrably ironic, archly “comic” I Am Not Stiller, which would cause me personally to go find this Latiolais person and belt her one if it were MY book she was insulting that way.

So the blurbs kinda-sorta made me do it. Tillman, Evenson, okay okay I'll read it I'll read it already. And I'm glad that I did, because now I'll be on the lookout for whatever Van der Vliet Oloomi comes out with next. She's got something to say. That makes her interesting to me. I hope to you, too.

But $16? I know that it's not that much money in the cosmic scheme of things, but as I'm not made of money (I appear to be made of anti-money judging by my bank balance which I don't have as I don't have enough money to keep in a bank according to the banks), I would not have made a purchase. Should I recommend that you make the purchase?

Yes. Yes, I should; rare is the discovery of a unique voice. The pleasures that await you within are worth the investment.
Posted by Richard at 6:30 AM