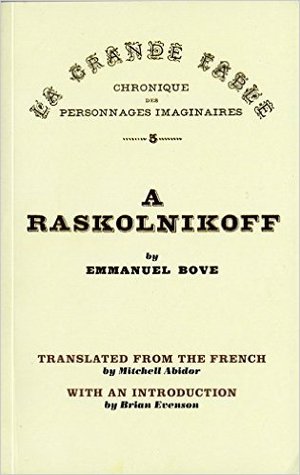 The Publisher Says: A Raskolnikoff was originally commissioned for a series of novels called “The Great fable: Chronicle of Imaginary Characters,” in which figures from literature, theater, film, and legend were brought back to life. Other writers chose Merlin, and Chaplin's Tramp; Bove's choice was to write “a continuation of Crime and Punishment.” In a letter to his publisher he said that Raskolnikoff “Doesn't appear in flesh and blood, but his influence on the young man's spirit is very visible.”


My Review: So often US readers approach translations from the French with fear: I won't understand it, it will be impossible to mentally pronounce the names, French writers are all pervy. Small, shining gems called récits go ignored and unsold here; perfect novellas, longer and more complex than récits, never make it past the mail room of the Big Five. Just too expensive to pay for translation, editing, promotion, and then sell 10.

This is the mindset. I've seen it from the inside, and heard the rationales with my own two shell-like ears. Blessedly there are presses like Red Dust Books whose mission is to bring the finest literature the world to the English-speaking market.

Bove's work isn't familiar to a lot of that market because it hasn't been translated very completely. Red Dust is doing what they can afford to do in order to rectify that. A Raskolnikoff should help their efforts, because there isn't very much to criticize about this wonderful book. I can't compliment the translator highly enough. Nuances of tone are beautifully preserved, descriptive passages are delicately rendered:


The snow kept falling, melting as soon as it touched the ground, transforming the sidewalks into swamps. They entered a café where people were playing cards, where the banquettes were dry, where a gentle heat floated like the joy in living. ... A feeling of well-being overcame them. There are moments that are particularly beloved by the dissatisfied, transitory moments. For them these moments are a luxury, and one shouldn't only see in certain people's mania for going to new cabarets their need to get drunk, but also that of changing their status.

That snow-swamp, dryness and heat representing joy. The well-being of the dissatisfied manifesting in the craving for novelty and drunkenness. We all know people with that set of problems, or have experienced some of them yourself. To place the earthiness and the ethereal...swamps with joy...in close proximity echoes the experience of the average person's life, only better said.

But the spirit of Dostoyevsky's villainous, selfish Raskolnikov, true to the remit of the series Bove was commissioned to add to, doesn't leave much room for the finer things to come to our protagonist Pierre or his gal-pal Violette:


All the distress of a miserable life, of a joyless life, of a life that no love had ever made beautiful could be seen in his face. It was the same expression that can be seen on the faces of all men when they don't know they're being observed and when, ceasing to observe themselves or others, for a moment they are themselves.

Life's hard, then you die, and nothing alleviates the painful trudge from cradle to grave. Even God, on whom Pierre calls to defend and protect him in his innocence, speaks to him and confirms his worst possible fears, that God knows how we sever our connections to God and to each other, how we must live alone and die alone. And that is that for the man's sanity. His behavior cracks wide open, leaving Violette to follow behind him as she always does, begging for some scrap of sanity to enter his smashed, flaking personality, come home, and let her take care of him as she always has, as she builds her identity around.

Nothing about this story is uplifting, and no one here is any kind of hero or heroine. What makes this story so delightful to read isn't hope for the world to embrace and accept these broken people, it's that a flawed and cruel and useless man can utter these words to his favorite whipping post, Violette:


"On the contrary, you're an angel. You pass through suffering and ugliness while keeping your heart intact. There is nothing more beautiful than this in all the world, and you can tell anyone who wants to condemn you for any reason to come and see me. And if they don't want to believe me I'll fight them until I'm worn out."

And if anyone believes that, it sure isn't Violette. She loves Pierre, she can't leave him by himself, but she can't change him. She knows it, accepts it. And if that isn't a reason for someone to fight for her, what is? But he never lifts a finger for her, and she's unsurprised and unhurt by it.

Vanishing around the corner, this story ends with simple directness. The job that Bove set out to do, to reveal the Raskolnikov in a perfectly ordinary, utterly bizarre, wildly uncontrolled young man, is perfect and satisfying. It's a single-sitting serving of intense and beautiful inner violence and outer inconsistency.

What can I say? I loved the book. Try it and you might love it too.
Posted by Richard at 6:30 AM