DOWN THE RABBIT HOLE, what it looks like inside a narcoterrorist leader's world 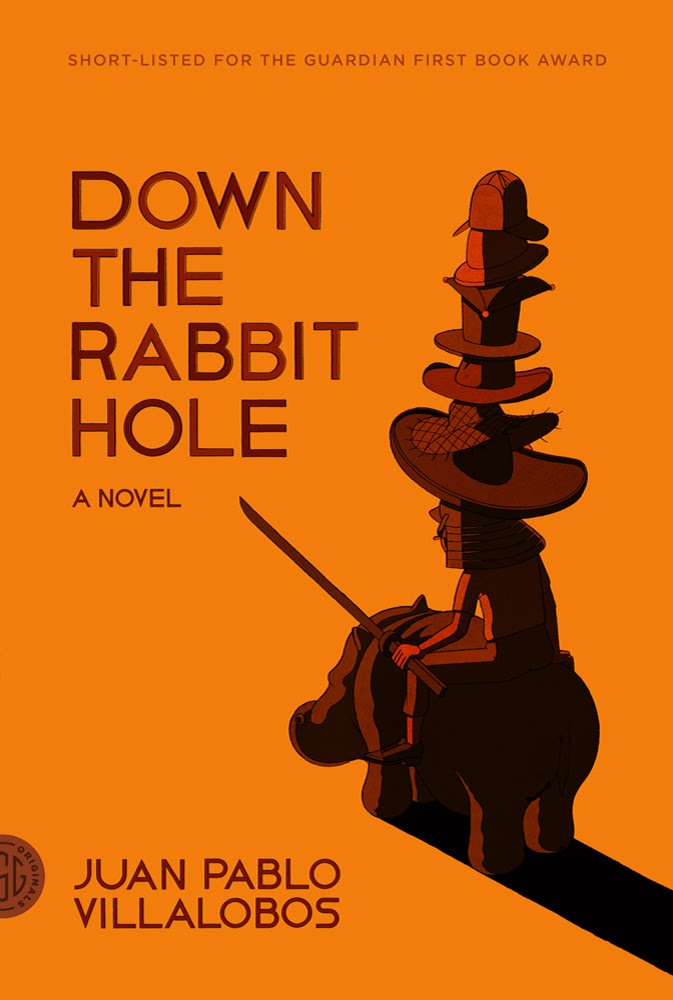 Tochtli lives in a palace. He loves hats, samurai, guillotines, and dictionaries, and what he wants more than anything right now is a new pet for his private zoo: a pygmy hippopotamus from Liberia. But Tochtli is a child whose father is a drug baron on the verge of taking over a powerful cartel, and Tochtli is growing up in a luxury hideout that he shares with hit men, prostitutes, dealers, servants, and the odd corrupt politician or two. Long-listed for The Guardian First Book Award, Down the Rabbit Hole, a masterful and darkly comic first novel, is the chronicle of a delirious journey to grant a child’s wish.


My Review: First, I must get this off my chest: THIS IS NOT A NOVEL. At ~35,000 words, it could be called a novella, a work of 15,000 to 40,000 words (definitions vary on this point, but ALL definitions include 30,000-40,000 words in them and this is that length) that features fewer conflicts than a full novel and more complex ones than a short story. I don't think it's a novella because it's a first-person story and features only one fully developed character, Tochtli (“Rabbit” in Nahuatl, relax we'll get there). It's a récit , a form of narrative that has a simple through line, is told from one PoV and quite often in first-person present and past, and offers little in the way of contextualization, of “world-building,” as it's all in the narrator's PoV. I hate the publisher and the trade folk yip-yapping NOVELNOVELNOVEL about a 70-page (generous margins, several blank pages in the text) so as to get over the reading public's aversion to “lesser” forms. How about we review the piece as it is, and urge the reading public to read it without misleading them? Someone buying a novel expects that it will do what novels do, really explore one or two conflicts with results and resultant changes in characters' lives. Not happenin' here.

Terrific story, this one of a drug king's kid and the many oddities paranoia and isolation have allowed to blossom in him. The names, all taken from Mexico's major native tongue of Nahuatl (the Aztecs spoke it), are all of animals...the narrator's name means Rabbit, his father's name means Rattlesnake, his tutor's name means Deer, and on. They're all like gang nicknames, playing on the culture of nicknames that describe some major thing about a person. Rattlesnake? How can you not perceive a drug lord as a cold-blooded, dangerous, venomous critter? Rabbit? Scared, small, needs to be hidden away—suits our narrator's life to a T.

Translator Rosalind Harvey has done a marvelous, if British, job of rendering a precocious kid's usages and crotchets into spottily adult language. I haven't read the original Spanish, so I don't know how faithfully she's reproduced Villalobos's original, but I suspect quite well. The language has that certain “feel” that good translations do, a kind of smoothness and polished gleam that speak of quality made from quality. That Tochtli is an odd kid is to be expected, that he uses (frequently!) words he's just learning is to be expected, and since those words...sordid, pathetic, devastating...are a little above his actual grasp, the author's use of them in the kid's mouth makes several very trenchant points.


Yolcaut (Rattlesnake) watched the news with me and when it was over he said some enigmatic things to me, First he said:
“Ah, they suicided her.”
And then, when he'd stopped laughing:
“Think the worst and you'll be right.”
Sometimes Yolcaut speaks in enigmatic and mysterious sentences. When he does that it's pointless to ask him what he means, because he never tells me. He wants me to solve the enigma.
Before I went to sleep I looked up the word prestige in the dictionary. I learned that prestige is about people having a good idea about you, and thinking you're the best. In that case you have prestige. Pathetic.

It's all part of building the reader's awareness of the twisted, strange, uncomfortably exaggerated natural parental protection of our kids. Other details include Tochtli's always painful stomach cramps that the doctor can't find a cause for, Tochtli's obsessive passions for things like being a Japanese samurai who's mute and therefore enigmatic (!), his endless list-making. The kid would've been strange no matter what, but Yolcaut (Nahuatl has no dipthongs, so say each letter as if it were a Spanish vowel or a Basque consonant) being what and who he is has made the problems giant-sized.

It's a disquieting little thing, and it's quite darkly amusing, and it's—Praise the Muses!—it's original. It's balm for a weary-of-~meh~ reader's soul. You'll love it, or you'll hate it, but you won't walk away wondering what it was that you just read.
Posted by Richard at 6:30 AM