THE WINTER OF OUR DISCONTENT, my very best read of 2009...a Steinbeck, of course 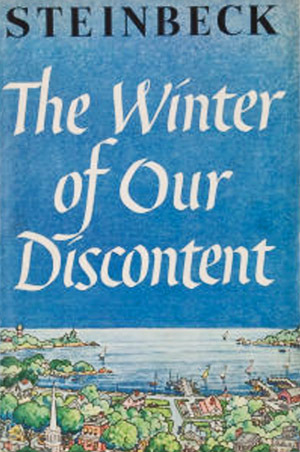 The Publisher Says: Ethan Allen Hawley, the protagonist of Steinbeck’s last novel, works as a clerk in a grocery store that his family once owned. With Ethan no longer a member of Long Island’s aristocratic class, his wife is restless, and his teenage children are hungry for the tantalizing material comforts he cannot provide. Then one day, in a moment of moral crisis, Ethan decides to take a holiday from his own scrupulous standards.

Set in Steinbeck’s contemporary 1960 America, the novel explores the tenuous line between private and public honesty that today ranks it alongside his most acclaimed works of penetrating insight into the American condition. This edition features an introduction and notes by Steinbeck scholar Susan Shillinglaw.

My Review: This is a wonderful short novel by a master of his craft at the peak of his form. It is also his last novel.

Some people at the time it was published felt it was a wrong turning for Steinbeck (The Grapes of Wrath, Tortilla Flat) to abandon both the west coast that had made him famous and brought his considerable social conscience to the world's attention for an east coast grifter's POV. The Winter of Our Discontent is a story that has nothing but shades of gray. Everyone in it is shady somehow. That is, I think, what verschmeckled the reviewers and made the public angry. Up until then, there were clear-cut Good Guys and Bad Guys in every Steinbeck tale. Here...no, no one qualifies as all good or all bad.

The POV is of Ethan, a man who is the degenerate scion of a venerable family. He is married with teenaged kids, and he will do anything to support his family. Including, to their horror, work for an Italian grocer as his clerk. The nerve of the man, a son of the founder of his town, working for someone who *should* be his gardener, according to his friends and his kids.

Well, he thinks, how can I help it, we all gotta eat. So he hatches a plot that will restore the family "honor" by swindling a friend. He goes through with it. He gets what he wants. And, frankly, so does the "swindled" friend, an alcoholic prowling for his next few thousand drinks.

This isn't really Steinbecky stuff, it's too hard to pin down from a moral standpoint. On the other hand, it's superbly told, and it's amazingly well crafted, and it's undoubtedly the best thing Steinbeck wrote after 1950. Reviews were harsh, sales were poor, and Steinbeck lost heart for fiction after that. He published two travel books before his death in 1968, a mere 30 years after "The Grapes of Wrath" burst on the scene. Imagine the wonders he could have produced had he lived to an Updikey 80-plus.

What a wonderful read, and so overlooked...please don't overlook it any longer!
Posted by Richard at 2:06 PM