EUROPE AT MIDNIGHT weaves many threads into a glorious tapestry. Thanks Dave Hutchinson! 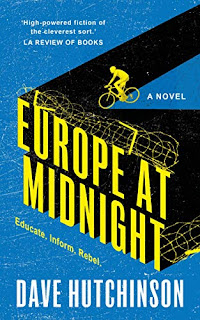 The Publisher Says: In a fractured Europe, new nations are springing up everywhere, some literally overnight.

For an intelligence officer like Jim it's a nightmare. Every week or so a friendly power spawns a new and unknown national entity which may or may not be friendly to England's interests. It's hard to keep on top of it all.

But things are about to get worse for Jim. A stabbing on a London bus pitches him into a world where his intelligence service is preparing for war with another universe, and a man has appeared who may hold the key to unlocking Europe's most jealously guarded secret...

My Review: I have to disclose that, although I bought this book with my very own United States dollars, I'm pals with the author on social media. Believe me it affected my reading and opinion-making not at all, since an honest review is a better gift than a bunch of hot air. Also note that there are spoilers for EUROPE IN AUTUMN following.

At the very end of AUTUMN, a concept was introduced that's central to this book: The existence of "pocket universes," a modern-day physics concept that boggles my tiny 2-volt brain. It's defined as: "A pocket universe is a concept in inflationary theory, proposed by Alan Guth. It defines a realm like the one that contains the observable universe as only one of many inflationary zones." Wikipedia rocks, and everyone should throw some donations at Jimmy Wales.

So anyway, this pocket universe concept is the source of some really bad-ass events in the world we live in, including a hideous pandemic flu that's done what the Black Death did to 14th-century Europe. The devastation caused much economic misery. But as we all know, money for "black ops" will always flow copiously because there's always a secret to learn, one to protect, and no one dares to reveal it publicly in case The People rise up and shut off the money pipe. So our story threads all center on British Intelligence, the surviving Professor of Intelligence from a pocket universe called "the Campus," and the beloved (to me) Coueruers du Bois we learned so much about in AUTUMN.

All the adventures, the nightmares, the violent justice and injustice meted out are in search of a means to neutralize a threat to whatever place the character's loyalty lies. These people play hard and for keeps. Much bloodshed. All of it for ends that, in my opinion at least, make our world's conflicts seem as foolish as the story's stakes. Why is the mere existence of people your country can't or doesn't control so intolerable as to justify genocidal biowarfare?

EUROPE AT MIDNIGHT doesn't answer this question, raising it and examining it from several sides, but foregoing a simple and pompous jingoistic resolution. The use of pocket universes allows the author to compartmentalize the stories, in best spy-fiction fashion. The twist is that these pockets were created, not discovered, by a family of map-makers. The conflicts, therefore, are engineered and need not ever have happened had the greed and selfishness of one group not taken form in such an unusual way.

Or so it seems in this novel. The pocket countries that litter the near-future Europe after the pandemic, the pocket universes...were they created? Were they discovered and exploited, as the powers that be exploit the fragmentation of today's populations at the hands of venal and manipulative oligarchs?

If I've learned one thing while reading the Fractured Europe sequence, it's that perspective alters everything. I don't for a single second imagine that Hutchinson won't change our perspective on Fractured Europe in EUROPE IN WINTER, forthcoming late this year. Goddesses willing and the crick don't rise.
Posted by Richard at 6:30 AM